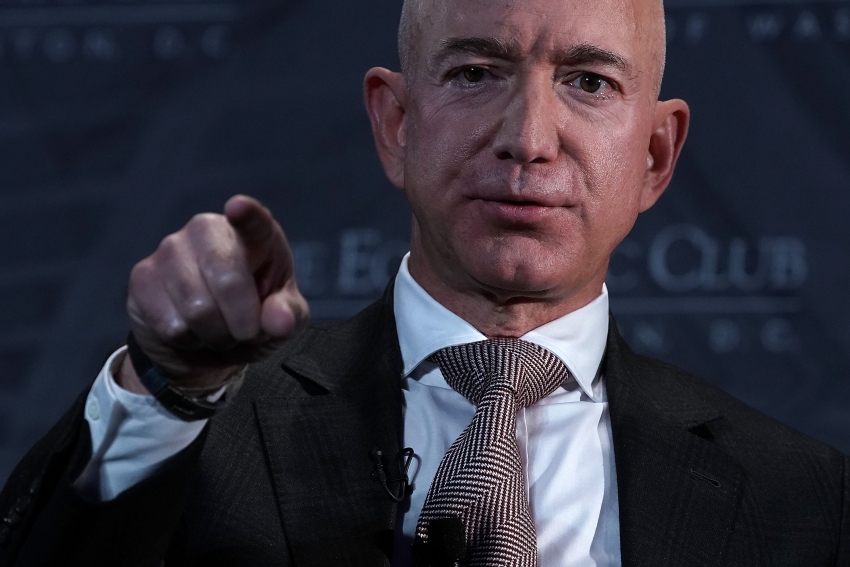 CEO and founder of Amazon Jeff Bezos participates in a discussion during a Milestone Celebration dinner September 13, 2018 in Washington, DC. (Photo by Alex Wong/Getty Images)

Two months after Amazon warehouse workers across the globe staged a one-day strike, the great “disruptor” is facing another workplace disruption—this time by tech workers at its Seattle headquarters.

The group Amazon Employees for Climate Justice announced this week that it would join the September 20 Global Climate Strike led by 16-year-old activist Greta Thunberg. The employees are calling on Amazon to commit to zero emissions by 2030, cancel the company’s custom contracts that accelerate gas and oil extraction, and cease funding climate denying lobbyists and politicians.

The last year has seen rank-and-file tech workers walk out over sexual harassment at Google and sales to migrant detention centers by the online retailer Wayfair. Tech workers have also organized a wider movement called #TechWontBuildIt to oppose contracts with U.S. Immigration and Customs Enforcement and Customs and Border Protection.

But according to Amazon Employees for Climate Justice, next week’s walkout will be the first one by workers at the company’s corporate offices, as well as the first walkout in the tech industry over the climate crisis. More than 1,000 employees have currently pledged to participate via an online form.

The action grew out of a push by Amazon employees earlier this year to pass a shareholder resolution asking Jeff Bezos to create a comprehensive climate change plan. After a group of workers announced their intention to introduce this resolution, Amazon responded by announcing a “Shipment Zero” program to make 50% of its shipments carbon-neutral by 2030. More than 8,000 Amazon employees signed an open letter in April deriding this plan as inadequate and calling on the company to do more.

In May, shareholders voted down the climate resolution, but the group continued organizing as Amazon Employees for Climate Justice (AECJ).

In These Times spoke to Catherine Han, a software developer at Amazon, about the historic walkout and what it’s like to organize tech workers.

Have you been a part of workplace organizing or actions before?

No, this is the first time I’ve been involved in something like this.

How did you get involved in Amazon Employees for Climate Justice?

Environmental stewardship has always been something I was really passionate about. But my involvement had mostly been volunteer work—with different conservancy groups, trail work, things like that. Nothing super formal.

At work, a lot of my coworkers are very environmentally conscious. We would have a lot of conversations about climate change and what we could do, but it was always from a personal standpoint. Joining a group at work hadn’t really occurred to me.

I heard about this group after the shareholders letter announcement last year, and getting involved has been a really eye-opening experience for me. We are bringing a voice to this huge problem that had previously felt like a lot of individual concerns.

Why did the group decide to go on strike?

The call to action for the climate strike really came from the youth who were organizing it. They put out a call to action for a global movement, and we wanted to show solidarity and respond to that call, and also to push Amazon to show climate leadership.

Has it been difficult to get co-workers on board?

There have been a lot of very positive responses and a lot of easy conversations.

I think some of the more negative or hesitant reactions are often from people who are inexperienced with organized action. So it’s just discomfort with the unknown.

I think there’s broad agreement that being a tech worker at one of the most powerful tech companies in the world is an opportunity to raise the visibility of the climate crisis and show what we expect from our leadership.

If we can come together and have a company-wide commitment to get to zero emissions by 2030, that will empower workers to actually come up with the specifics we need to meet that.

What do you think of Amazon’s response to the climate crisis so far? Your group has pointed out some of the problems with the “Shipment Zero” plan Amazon announced earlier this year. While the company has pledged to make half of its shipments carbon-neutral by 2030, for example, this could still mean a net increase in emissions if shipments continue to grow.

For us, just given the science and the time we have left to make a substantial impact on the trajectory of the climate crisis, Shipment Zero isn’t anywhere near aggressive enough.

The important thing was that this came as a response to the shareholder letter. So one of the biggest takeaways for me was that organized action does work. As the result of the shareholder letter, we saw a positive response from Amazon. For me, that was really empowering to see, and it makes me optimistic about the walkout and the power of that.

Was that the first time you’ve seen the success of collective action?

I really saw the power of organized action a few years ago during the women’s march. I went to the Seattle march and it was one of the first organized actions that I had participated in. Seeing power in numbers was really eye-opening for me.

My experience with the climate change movement within Amazon has been similar. For a lot of people, this is their first time being involved in an organization like this. I think that finding a voice together has been a very transformational experience for a lot of people who have been involved.

Earlier this year, workers across Europe, as well as Minnesota and Chicago, staged coordinated walkouts and other actions on Prime Day. Working conditions in Amazon warehouses are often very bad, and there are a lot of environmental justice issues associated with them—warehouses are more likely to be located in low-income neighborhoods and communities of color, and cause air pollution, noise, traffic safety and other issues in the surrounding area.

Do you see the climate organizing you’re doing as related to organizing by warehouse workers?

Amazon Employees for Climate Justice was definitely in support of the strikes. We’re focused on climate justice, and part of the climate crisis is that there is a disproportionate impact on impoverished communities.

We released a solidarity statement that articulates this:

Lending our support to our coworkers in Minnesota is a natural part of our climate justice priorities. We cannot create a sustainable, long-term approach to addressing the climate crisis without addressing structural racial and economic inequities that are part of our system of extraction — of energy, material, and human labor — that have caused the crisis.