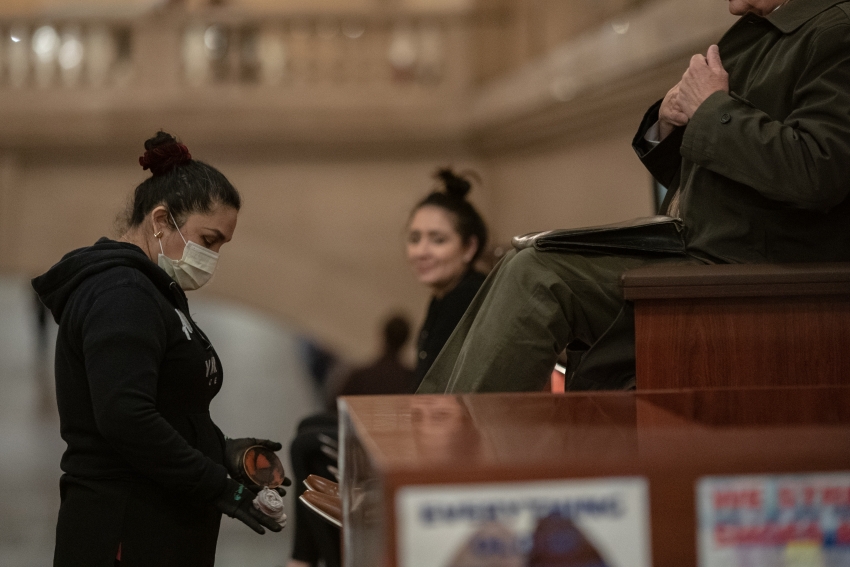 In the rush — or at least the pretense of rush — to bring immediate economic relief to the millions of average workers gutted by the tanking global economy brought on by the coronavirus, Democratic Party elites and centrist papers of record Washington Post and New York Times are cementing the terms of the debate to a narrow, ineffective, and wholly inadequate discussion of paid sick leave.

Over a forty-eight-hour period from Friday afternoon to Sunday afternoon, the New York Times has run twelve articles and op-eds online that substantively mention paid sick leave, including Associated Press and Reuters reprints. Not a single one of those pieces mentions the fact that informal economy and contract workers would not benefit from such protections, which are urgently needed — but ideally would just be one strand of a much larger safety net.

A piece published Saturday by the New York Times editorial board does criticize the legislation for paid sick leave passed by the House Saturday morning, shepherded by House Speaker Nancy Pelosi, for not going far enough because it doesn’t apply to companies with 500 or more workers. “In fact, the bill guarantees sick leave only to about 20 percent of workers,” the piece notes. “Big employers like McDonald’s and Amazon are not required to provide any paid sick leave, while companies with fewer than 50 employees can seek hardship exemptions from the Trump administration.” Yet nowhere in this article will you find any mention of the informal economy workers who are entirely excluded from this legislation.

This omission is glaring, because a significant portion of the US workforce is employed in the freelance and informal economies not covered by paid sick leave. According to some counts there’s over 56 million freelancers in the United States (though not all are economically precarious, many almost certainly are).

As for the informal economy, it is, by definition, difficult to determine the exact scale of this sector. The International Labor Organization (ILO) estimated in 2018 that 18.1 percent of total employment in North America is in the informal sector (the ILO didn’t look just at the United States). A 2011 Urban Institute report found “there are no precise estimates of the size of the informal employment sector in the United States, but it could range from 3 to 40 percent of the total non-agricultural workforce,” which means it could be as low as 4 million or as high as 53 million Americans.

Many of these informal economy and freelance workers are already in crisis. “Sex work has given me a level of financial stability I’ve never had before, but I’m still just one rent payment away from crisis,” a New England–based sex worker told Jacobin. “Most sex workers don’t have a safety net and will almost certainly be left out of any formal systems put in place to make up for lost wages. I’m already worried about what I will do when I lose income and have nowhere to turn.”

During the same forty-eight-hour period, the Washington Post published fifteen articles and op-eds that substantively mentioned paid sick leave, including Associated Press and Bloomberg Wire reprints. Of those, none gave a clear mention of informal economy workers. One opinion column by Adam Shandler discussed gig workers, but this brief mention provided the entire scope of coverage of the informal, freelance, and undocumented economy in the context of the coronavirus relief package.

Reading the Times and Post coverage, and statements from both Republican and Democrat leaders, it’s clear that helping the vulnerable and precarious dig out from the economic conditions they face is almost incidental to the paid sick leave mechanism. “The House’s failure to require universal paid sick leave,” the aforementioned March 14 Times editorial concluded, “is an embarrassment that endangers the health of workers, consumers and the broader American public.”

The urgent concern for our political and media leaders at the moment appears to first and foremost be containing the rate of the virus’s spread. A noble goal, of course, but one that is separate from making sure people don’t suffer economic hardship.

The pressing political question is: the focus on only paid sick leave? And why only two weeks? These questions are especially important given the almost immeasurable level of need among all workers.

“Informal economy workers are being entirely left out of the conversation, on the federal level but also state and local levels,” Fahd Ahmed, the director of Desis Rising Up and Moving, a New York–based organization, said to Jacobin. “Conversations have centered on more established, more formal, and resourced employers, but our membership is primarily undocumented and working in small businesses, often working on cash, doing domestic work inside of homes. A lot of the message doesn’t apply to their employers, or they wouldn’t qualify because of documentation processes that are required.”

The answer lies, in part, in the worldview of the most powerful Democrat on this issue and all others: House Speaker Nancy Pelosi. Pelosi is a longtime ideological adherent to thinking on deficits which prioritizes finding out how “one is going to pay for things” over whether the policy is moral or needed as such. Thus, in the event of a mass catastrophe, questions of austerity will, before negotiations even begin, limit what’s possible to the bare minimum required for Democrats to look like they’re Doing Something.

The excuse for the current half of a half measure, per usual, is that the ground ceded was necessary for “compromise.” But we have decades of evidence, including comments made by Pelosi herself in the past seventy-two hours, that this wasn’t a reluctant compromise made by an otherwise progressive champion of broad populist action, but the logical conclusion of her long-standing approach to politics. Pelosi has referred to far-right deficit hawk and Republican Pete Peterson as a “national hero,” and has derided anyone to her left for suggesting the Democratic Party may be insufficiently progressive.

On Saturday, when the Times broke the news of the limited scope of the bill, Pelosi took to Twitter to defend it, insisting, “I don’t support U.S. taxpayer money subsidizing corporations to provide benefits to workers that they should already be providing … Large employers and corporations must step up to the plate and offer paid sick leave and paid family & medical leave to their workers.” Not only does Pelosi begin her statement with the right-wing austerity catchphrase “US taxpayer money,” her rhetorical climax is mildly chiding corporations and demanding they “step up to the plate” without any sense of what the consequences are if they don’t.

In the time of the most pressing crisis facing the American poor potentially since the Great Depression, the vulnerable are offered up ideologically razor-thin hand-wringing by one of the people most empowered to actually help them.

It’s important to note that Alexandria Ocasio-Cortez and Bernie Sanders’ policy proposals would implicitly solve many of the problems of freelancers and those in the informal economy. In Sunday night’s debate Sanders name-checked homeless people and prisoners and he took a big risk when, months ago, he included undocumented people in his Medicare for All plan and Ocasio-Cortez has taken to social media this week to champion eviction moratoriums, student debt cancellation, and a universal basic income — all of which would fill much of the gap left in paid sick leave framing.

The goal, of course, is not to pit formal economy and informal economy workers against each other. Whether one is laboring for Jeff Bezos or for a small employer who pays cash under the table, workers deserve to be immediately bailed out by this unforeseen pandemic. Paid sick leave must be a part of this rubric, especially in times of profound public health crisis. But when paid sick leave — for a small number of workers, and for a limited amount of time — is accepted as the only emergency response, it’s tantamount to repairing a crumbling building with scotch tape.

We need to be talking about wealth redistribution on a far grander scale: What would it look like to provide immediate material relief, in the form of guaranteed income, to workers who are losing work — and who should not work, so that we can have a hope of containing this health crisis? How can we enact such a policy to ensure no one is left behind, no matter how they make their money, or whether they are able to make any money at all, regardless of immigration status or disability? What does it look like to pursue an ambitious program to redistribute wealth, unconcerned with selective “how will you pay for it?” concern trolling, on an unprecedented scale so that the people losing their jobs, and potentially losing their homes, can survive this crisis?

Millions of people are in free fall right now: Bars and restaurants are closing, construction sites are shuttering, yet rent is still due, mouths need to be fed, and there is no clear end date to the crisis. When the parameters of debate are drawn so narrowly as to exclude the actual actions that could bring these people material relief, that’s the same thing as leaving them to fend for themselves.

Sarah Lazare is web editor at In These Times. Adam Johnson is the co-host of Citations Needed podcast and a writer at the Appeal.