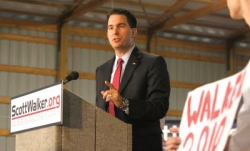 Scott Walker, the Republican governor-elect of Wisconsin, came into office pledging that he would add 250,000 jobs to the state during his first term.

But just days after his November 2 triumph, Walker already is digging an even  deeper hole on his jobs pledge. He's touched off a political furor by trying to block thousands of jobs from being created for a high-speed rail project.

The governor-elect has announced that he would turn away $810 million in federal stimulus money aimed at creating a high-speed train system for the 80-mile corridor between Milwaukee and Madison.

Walker, a fierce, long-time foe of mass transit, keeps repeating that he wants to devote the money to Wisconsin's highway system, despite U.S. Transportation Secretary Ray LaHood's blunt use-it or lose-it ultimatum in a recent letter:

I respect the power of governors to make decisions for their states. There seems to be some confusion, however, about how these high-speed rail dollars can be spent. For this reason, I would like to set the record straight: None of the money provided to Wisconsin may be used for road or highway projects, or anything other than high-speed rail...

Ending the project could cost as many as 13,719 jobs that the state Department of Transportation says would be generated through construction, engineering, design and train manufacturing tied to the project. (Some estimates run lower).

"We're giving away $810 million that will go to some other state, and we'll be losing out on anywhere from 4,700 to well over 10,000 jobs," fumed State Sen. Spencer Coggs, who was president of an AFSCME local before being elected to the Legislature.

Over the long haul, proponents of the train project argue, the spread of high-speed rail has the potential to generate new economic development in Wisconsin and other Midwest states efficiently connected by environmentally -friendly mass-transit. This would speed economic renewal in a region that has long been in decline as capital has shifted from production to finance and jobs have been shipped to Mexico, China, and other low-wage nations.

Apart from the high-income areas of the two key financial centers of Minneapolis and Chicago, "the industrial Midwest amounts to a wasteland of empty factories, corroding cities, and crumbling neighborhoods," wrote Richard C. Longworth in his influential book Caught in the Middle, published just before the recession intensified all of these negative trends.

State Sen. Coggs was among the parade of speakers—from labor, the environmental movement, the faith community, Latino, and African-American neighborhood groups—who addressed a spirited crowd of about 400 Monday. They denounced Walker's move as destructive both to the environment and the state's economic recovery.

The rally took place outside the new Spanish-owned Talgo train-equipment operation that employed 80 workers for the mass-transit project before Walker's election. "I had to send 80 people home Thursday," explained Lashonda Buck, project administrator for the rail project's design phase. "I lost my job, too."

But proponents of mass transit believe that they have Walker in a vulnerable spot with the economy foremost in the public mind.

"This project has the potential for eventually creating better economic links across the Midwest," said Phil Neuenfeldt, the Wisconsin AFL-CIO's recently-elected president. Even Chamber of Commerce officials in LaCrosse, located on the Mississippi River right across the Minnesota, back the project because they see the potential of being economically linked up with both nearby Minneapolis-St. Paul and the rest of Wisconsin.

Playing off Scott Walker's campaign slogan, Neuenfeldt said of the potential for high-speed mass transit, "Wisconsin would really be open for business."

The Talgo operation is located in a corner of the vast, otherwise vacant former AO Smith complex in Milwaukee's inner city. AO Smith once employed 6,500 workers, including Coggs' father for 27 years, before it began shifting jobs to Mexico, with the entire facility shutting down in 2004.

But with Talgo moving into part of the former AO Smith site, the neighborhood got its first injection of skilled manufacturing jobs in many years. Unemployment in the area runs at an appalling 53%, says Sen. Coggs, who represents the area, and a recent study found that Milwaukee is the fourth poorest city in the nation.

"Talgo is an anchor tenant, and will hopefully help us to re-create our manufacturing base," said Neuenfeldt. Milwaukee has lost 80% of its manufacturing jobs since 1977, according to urban economist Marc Levine of the University of Wisconsin-Milwaukee.

"With this project, some of the jobs will be union jobs, but they will all be high-paying jobs, and that's what's really needed," the AFL-CIO president said. "Labor, environmentalists, religious groups, and youth all want the same thing: an economy that works for all the people."

However, Scott Walker has a very different vision for Wisconsin, beginning with completely ending corporate taxes that will mean a loss of government services, higher tuition at public universities, and higher taxes for homeowners.

In opposing the proposed Milwaukee-Madison high-speed train, Walker relied on the flimsy pretexts that that the project will generate only 55 permanent jobs (e.g., engineers, brakemen, conductors, etc.) and that maintenance will be an ongoing drain of $7.5 million to $8 million on state taxpayers.

That sum is an infinitesimal sliver of the state's roughly $14 billion annual budget. Moreover, "One state transportation official said the taxpayers' share of operating costs could be as little as $750,000 annually."

But Walker avoids confronting the much larger real job potential and the tiny maintenance cost. His campaign website threw down this defiant challenge:

I am drawing a line in the sand, Mr. President: No matter how much money you and Governor Doyle try to spend before the end of the year, I will put a stop to this boondoggle the day I take office.

Walker's bristling hostility to the notion of mass transit is deeply ingrained in the Wisconsin Right, which sees high-speed rail as an insidious expansion of the public sector. In the calculus of Walker and his allies, spending on highways and the health and climate costs of pollution do not count as subsidies to auto transportation.

Furthermore, some elements of the Right oppose smaller mass-transit projects that would allow more inner-city residents—disproportionately African-Americans and Latinos—to seek jobs in the suburbs, a prospect that they clearly did not relish.

Popular African-American talk-show host Earl Ingram, Jr., a former A.O. Smith worker himself, was among those at the rally. He vowed to stress the issue of the rail project to his listeners. "I'm going to keep pounding away on this.

"It's all about Scott Walker and the promises he made to right-wing talk show hosts, who made him who he is," said Ingram. "It's just very unfortunate that the facts don't change his mind."