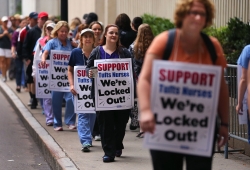 "If this decision is allowed to stand, strawberries may very well become the new poster child for giving farmworkers cancer and late term miscarriages."

During his final days in office, former California governor Arnold Swartzenegger bid the state's farmworkers farewell by allowing the use of a strawberry pesticide deemed so toxic that it is used to create cancer in lab mice used for research.

Methyl Iodide is made by Arysta LifeScience, the world’s largest privately held agri-chemical company in the world. Arysta stands to make a lot of money if its chemical makes its way onto the fields. In fact, according to Pesticide Action Network of North America, Arysta hired Peritus Public Relations "and the lobbying firm Patton Boggs to create and implement a strategy to persuade national and California government officials to approve the toxic chemical."

Now a coalition of environmental groups is hoping newly inaugurated California Governor Jerry Brown will rescind the decision. They submitted 53,000 comments from members of the public urging Gov. Brown to prevent the use of the chemical.

They aren’t stopping there. Last week they filed suit in Alameda County Superior Court to block the decision from taking affect.

The suit was filed by Earthjustice, an environmental justice organization, and California Rural Legal Assistance, a farmworker’s advocacy group, against the state Department of Pesticide Regulation, the agency's director and Arysta LifeScience. The Dept. of Pesticide Regulation enforces state and federal laws regulating pesticide use in California and is a department within the state Environmental Protection Agency.

The suit represents a host of plaintiffs including Pesticide Action Network North America, United Farm Workers of America, and several other organizations and individuals.

Agricultural workers have to deal with the fact that nearly 1 billion pounds of pesticides are spayed or injected on fields and orchards around the country. Incidents of people sickened by fumes are all too common. Many occur in California, the biggest consumer of pesticides in the country.

The state’s 700,000 farm workers could now have another chemical to assault them. Jose Hidalgo Ramon, one of the plaintiffs, told Environmental News Wire:

It's farmworkers like me who become sick. As a strawberry picker, I have worked near many pesticide applications. First we smell the pesticides. Then our eyes burn, our noses run and our throats hurt. I'm against using methyl iodide because it's already too dangerous in the fields, we don't need new, even more dangerous, toxins.

Weirdly, the state’s Department of Pesticide Regulation is phasing out the ozone-depleting fumigant, methyl bromide as required by the Montreal Protocol. To replace it, the agency is bringing in methyl iodide, which doesn’t deplete the ozone layer but has, by all scientific accounts, devastating affects on humans.

To justify its use, the DPS issued a “Finding of Emergency” to quickly replace methyl bromide with methyl iodide because of the Montreal Protocol. This dovetailed with the timeline of a friendly governor who was still in office at the time.

They approved the use of methyl iodide despite a huge public outcry and scientific warnings and concerns. Stated CRLA attorney Mike Meuter: "DPR created a political 'emergency' by insisting on locking in its decision before a new administration takes office."

In a letter issued by the California Scientific Review Committee, Dr. Gina Solomon, Senior Scientist, Natural Resources Defense Council spelled out clearly what the impact is:

The clear scientific consensus of the independent expert panel carries great weight. It would be a mistake to ignore the science, since the people of California would pay the price with their health.

The chemical also has a high potential to contaminate groundwater and the volume used to fumigate the fields and its tendency to drift off site poses a great danger to farmworkers and rural folks. The scientists called the chemical “difficult, if not impossible to control.”

If approved, the chemical would be applied as a gas at rates of up to 100 pounds per acre, according to Pesticide Action Network.

The suit challenges the unlawful emergency regulation used by the Dept. of Pesticide Regulation to approve the registration decision, arguing:

Breathing even small amounts causes slurred speech, vomiting,fetal miscarriage, and permanent damage to the lungs, liver, kidneys, and central nervous system. Direct skin exposure causes burns. And methyl iodide causes cancer: it is designated as a known carcinogen by the State of California, a hazardous air pollutant by the United States Environmental Protection Agency, and a toxic air contaminant by DPR itself.

Erik Nicholson, national vice-president of the UFW, told ENS, "Farmworkers are on the front lines of methyl iodide use and will suffer the most tragic consequences. If this decision is allowed to stand, strawberries may very well become the new poster child for giving farmworkers cancer and late term miscarriages."