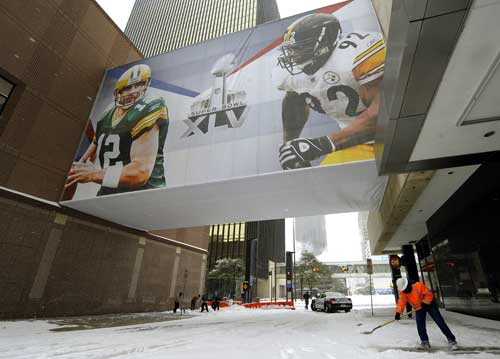 This year's Super Bowl game brings together two NFL teams—the Green Bay Packers and the Pittsburg Steelers—who are organically attached to working-class America and symbolize the nation's manufacturing base. (Which is, of course, shrinking fast.)

Not only have the two teams long borne the names of key local industries that provided work for their blue-collar fans—meatpacking in Green Bay and steel-making in Pittsburgh—but they also both have management teams that are unusually close to the players and fans.

The Packers are actually publicly-owned, and are also the only NFL team of 32 to fully disclose their finances. While the Steelers are privately owned by  the Rooney family, the Rooneys have consistently been steadfast in their support of players even during labor disputes. But looming behind the Super Bowl is the dark cloud of the National Football League owners launching a war to extract more work and pay from the players, a management demand that should sound familiar to workers across the globe.

The owners are threatening a lockout beginning as early as March 4 unless the players swallow their demands for a substantially reduced share of the revenues that the players generate, coupled with playing two more regular-season games that will undoubtedly shorten many players' careers.

Recognizing that the current 16-game season provides the NFL with $9 billion in annual revenues, Pittsburgh owner Dan Rooney stated recently that he opposed the management position.

“We play enough games,” said Rooney... “You have a system that works. Why add [more games and more risk of injury]?” However, Rooney is opposed by a majority of hard-line owners led by a bloc primarily from the anti-union Sunbelt—the Dallas Cowboys' Jerry Jones and the Carolina Panthers' Jerry Richardson—who are intent on winning the owners' demands, whatever it takes.

One possible outcome: a lockout that entirely wipes out the 2011 season, a prospect raised by BloombergBusinessWeek. "When you start talking about a lockout a year ago, that calls into question your good faith in seeking an agreement both sides want," pointed out Ed Garvey, former NFLPA executive director 1971 to 1984. (Disclosure: I have worked with Garvey in the past; see note below.)

The intransigence of the hard-liners was underscored by their decision to bring on management attorney Robert Batterman, who gained notoriety for the National Hockey League lockout that destroyed a full season. "The NHL has not recovered yet from the lockout, but the NFL owners are bringing in Batterman," said Garvey

The owners are particularly fixated on snatching back the players' guaranteed share of total revenues won after a 1982 mid-season strike during which no player crossed the NFLPA picket lines. The union's capture of a 55% share of all revenues was perhaps one of the most radical demands achieved by labor in the post-WWII period.

Unlike profit-sharing agreements that often amount to a glorified year-end bonus and are generally not truly based on total earnings, the NFL players sought and won a 55% share of the gross revenues that their labor generated.This remains a bone stuck in the owners' throat, Garvey said.

'WE ARE THE GAME': PLAYERS CRUCIAL, OWNERS NOT

"The major gain in 1982 was share of gross revenues. We sought and won 55%. We built support among the public by emphasizing, 'We are the game'" —emphasizing that while the owners were dispensable, the players are not," Garvey says.

The NFLPA also out-maneuvered the owners by their constant updates to the membership and outreach to the public. "We had team meetings, a weekly newsletter, video messages. We denied them the advantage of having exclusive access to the mainstream media, and we had a consistent message to spread," explains Garvey. "As much as we could, we had players out speaking to local groups like the Rotary, getting out in the public domain."

(This week, CBS announced that it was refusing to air a "Let us play" ad by the NFLPA explaining the players' position.)

The 1982 strike required extensive preparation, Garvey related. "We brought in labor experts from Cornell and Wisconsin and elsewhere to talk to the players, we did training in speaking, and did everything from role-playing to seminars at the George Meany Center.

The NFLPA also brought in union leaders to remind the players about the importance of their struggle, like the late International Association of Machinists President William "Wimpy" Winpisinger, an electrifying speaker and staunch NFLPA backer.

But the union's high-profile strategy of seeking to win public support had its critics, like the late AFL-CIO President Lane Kirkland, who favored both conventional goals and cautious methods. "I remember Lane Kirkland telling us to avoid too much publicity," said a still incredulous Garvey. He said,' What if you lose?' Well, What if we win?

"Once the players really understood that they truly are the game, they were well on the way to victory."

In the present battle, management is keeping the players focused and unified with demands that the players see as outrageous. "This time around, management keeps on making it easy for the union by insisting on 18 games and on taking away money," said Garvey. "They even expect players to contribute part of the cost of new stadiums."

While the growth of revenues has slipped over the last couple years of recession, this hardly justifies the massive take-backs that the owners are demanding, Garvey contended. "The players are now getting closer to 60% of the revenue, as individual negotiations have gone over and above what was anticipated. It's a lot of money, but it's not that Jerry Jones and the other owners cannot afford to take their wives out for dinner now."

If revenues are genuinely uncertain, a shorter contract would make sense so that both sides can make adjustments, said Garvey. The owners should also open their finances to the players to justify their position.

But that approach is simply not in the NFL owners' playbook.

"They never try to justify what they want, they just demand it. They don’t expect the laws of either logic or collective bargaining apply to them," Garvey stated.

Over the years, the owners' arrogance has won them sympathy. One close observer of the game told Sports Illustrated in 1993, "Even if the NFL owners had their hands on the Bible and swore that they were lying, I still wouldn't believe them."

*Full disclosure*: I worked alongside Garvey for three years at Labor Strategies, Inc., a Madison-based labor consulting firm that assisted unions with communications and strategy assistance when they faced the threat of plant shutdowns, privatization, decertification and other crises. In all of our work, we stressed building internal union unity through extensive communication efforts and building alliances with labor and community groups through systematic message development and outreach. I have worked with him on many additional projects.