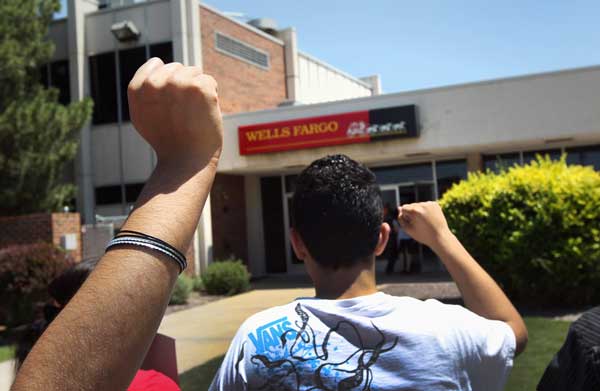 Demonstrators stage a protest outside a Wells Fargo branch on July 1, in Aurora, Colo. The event was part of a national day of action’ targeting the bank. (Photo by: John More/Getty Images)

A new coalition of immigrant and labor groups tries to shame the nation’s largest investment firms.

On May 16, just four days after demonstrations against the private prison industry in cities across the country–part of the National Prison Industry Divestment Campaign–Pershing Square Capital Management, a New York-based hedge fund, sold its remaining shares of Corrections Corporation of America (CCA) stock. After selling 3.4 million shares earlier in the year, the fund unloaded another 4.4 million. Altogether, the shares were worth nearly $200 million.

Pershing didn’t say it was reacting to the new campaign, but Enlace, an umbrella group of 21 worker centers, unions and community groups in the United States and Mexico that is leading the divestment campaign, took credit in a statement later that month.

On May 12, the first day of the campaign, Enlace and other groups organized protests in New York City, Los Angeles, Tucson, Nashville and Miami to pressure Wells Fargo, General Electric, Fidelity, Wellington Management Company and other firms to divest from private prison corporations including CCA, GEO Group (GEO) and Management and Training Corporation (MTC).

CCA, the private prison industry’s largest company, which has contracts with Immigration and Customs Enforcement (ICE) and the U.S. Marshal Service, is also the nation’s largest detainer of undocumented immigrants. Since the company began to receive ICE contracts in 2000, immigrant rights groups have been targeting CCA for prisoner abuse, poor working conditions for guards and the company’s connections to anti-immigrant legislation. Now Enlace is trying to force reform by targeting firms that financially support CCA’s entire industry.

Chuck Foy, the former executive director of the Arizona Correctional Peace Officers Association, a union for prison guards, told Prescott, Ariz.’s The Daily Courier in 2009 that CCA facilities provide wages at $10 to $12 per hour–almost 50 percent below the wages at state-run prisons. Foy also said CCA prisons hire fewer correctional officers and provide, on average, 240 hours fewer of training to their personnel.

A 2005 lawsuit brought by the watchdog group Michigan Protection and Advocacy Service against GEO, the nation’s second-largest private prison company, claimed there was only one social worker for 483 inmates at the GEO-run Michigan Youth Correctional Facility in Baldwin, Mich. The facility reported 61 suicide attempts in a six-month period that year, compared to 18 the previous year.

As of December 31, 2010, Wells Fargo had $88.7 million invested in GEO and $5.9 million in CCA. “When we spoke to Wells Fargo, they denied having any holdings with CCA and GEO group. Even though the information is public, they still denied it,” said Peter Cervantes-Gautschi, director of Enlace. While the bank may not admit its connections to the private prison industry–at least to activists–its investments are sound.

Detainment is a lucrative trade. Prisons can earn $90-$200 per inmate per night, which translates into nearly $5 billion in revenues each year. The industry has lobbied diligently to secure profits, supporting and even writing laws to increase prison sentences and populations, especially among undocumented immigrants. Between 2003 and 2010, private prison companies spent more than $20 million lobbying legislators and the Department of Homeland Security. Additionally, GEO has given $790,000 to lobbying firms HighGround and Podesta Group, while CCA has given $680,000 to the Washington, D.C. lobbying firm Akin Gump.

Arizona state senator Russell Pearce, the purported writer of SB1070, Arizona’s anti-immigrant law passed in 2010, met with CCA representatives at an American Legislative Exchange Council (ALEC) conference in December 2009, where together they reportedly drafted the legislation. When Pearce introduced the bill in January 2010, 36 senators signed on as co-sponsors. Over the next six months, 30 of them received donations from CCA, GEO or MTC.

“Criminal justice law is supposed to protect citizens, not purposely put them away for financial gain,” Cervantes-Gautschi said.

Since SB1070 was signed into law in April 2010, five other states–Utah, Indiana, Georgia, Alabama and South Carolina–have passed similar or near-identical legislation. On May 13, Georgia governor Nathan Deal, who has received thousands of dollars worth of campaign contributions from CCA, signed his state’s version of the bill, HB87, into law.

As anti-immigrant laws gain support across the country, solidarity groups are redoubling their efforts against the corporations that stand to benefit. On July 1, when HB87 took effect, the prison divestment campaign held its second, larger round of demonstrations outside of Wells Fargo offices in 14 cities across the country, demanding that the bank and all other shareholders of private prisons dump their investments. Activists in Denver convinced the Wells Fargo regional vice president to agree to meet with them in August. A different vice president rescinded an earlier agreement in San Francisco, however, saying that while the Wells Fargo mutual fund invests in prisons, the bank does not.