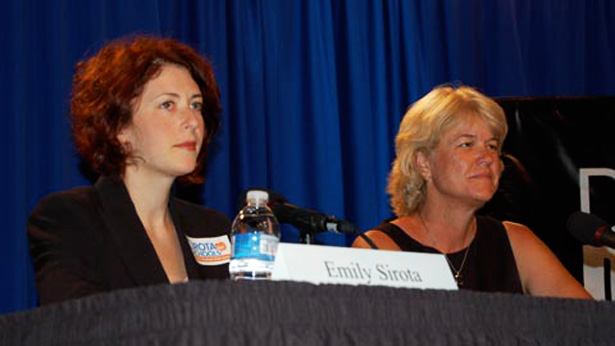 Emily Sirota (at left) sits next to the woman who beat her in the Denver Public Schools Board rate, Anne Rowe. Rowe raised more than twice as much money as Sirota to finance her campaign.

The city’s Public Schools Board election was flooded with outside money—and could be a model for pro-charter, anti-union ‘reformers.’

The Denver board election was seen as a pivotal battle for those seeking to privatize education as well as crack down on teachers' unions.

School boards typically control massive amounts of money and assets that can be dished out through contracts for services, purchases of land, and diverted into charter schools and voucher programs. Despite school boards’ power, however, until now board elections around the country have typically been fueled by door-to-door canvassing rather than high dollar fundraising. But increasingly, large donations from wealthy individuals and corporations are pouring into schools board races around the country to enact an agenda that attacks collective bargaining rights of teachers unions and increases the privatization of public education through charter schools and vouchers.

The Denver Public School Board race, which took place yesterday, is a prime example of outside money from wealthy individuals and corporate funded groups flooding elections. That money proved to have a significant effect on last night’s election for the union-back candidates opposed to the so-called “reform slate.”

After being out-fundraised more than two to one, union-backed candidate Emily Sirota lost to investment banker Anne Rowe by 30 percentage points. Another union-backed candidate, incumbent school board member Arturo Jimenez narrowly won re-election to the school board by a margin of only 73 votes over reform candidate Draper Carson. Finally, “reform” challenger candidate Allegra Haynes easily won election to the board’s at-large seat, taking 59 percent of the vote. (Full disclosure: Emily’s husband David Sirota is an In These Times senior editor and participated in interviews for this story.)

The Denver board election was seen as a pivotal battle for those seeking to privatize education as well as crack down on teachers’ unions. In addition to increasing the number of charter schools in Denver, the school board has already implemented the controversial “innovation schools” program, in which public schools can receive outside funding from groups like the Walton Foundation (funded by the heirs of Walmart) if teachers approve votes for certain changes to be made to the school.

“They first dangle the bottle of innovation and reform by promising money for schools, but the innovation they are talking has nothing to do with instruction. It has to do with waivers from unions contracts,” says Denver Classroom Teachers Association President Henry Roman. “The teachers basically have no rights now. They are union members in name only.”

Now, so-called “reformers” in the Denver Public School are talking about expanding charter schools and the privatization of public education through vouchers. The president of the Denver School Board was recently spotted at a fundraiser for vouchers in a nearby county and the Democratic Mayor of Denver has signaled an openness to vouchers.

Those kind of educational changes can happen easily because last night’s election results mean the “reform slate” continues to enjoy a 4-3 margin on the Board. This has led to a massive influx of money from an unusual alliance of wealthy individuals and corporate executives.

In contrast, the only group to give more than $10,000 to either of the union backed candidate was the small donor committee of the Denver Classroom Teachers Association, which contributed $24,000 to the Jimenez campaign and $46,580 to Sirota’s campaign. (All campaign contribution details are here.)

Gordon and Reiman are both members of the national organization Alliance for Choice in Education, which works with state and local elected officials across the country to promote ant–teacher tenure, pro-charters and voucher legislation. Interestingly, oil company executive Henry Gordon, who has pumped nearly $100,000 into the Denver School Board races, admitted to the Colorado Statesman that he was not even familiar with the candidates, but contributed to the candidates after being asked by a friend.

Gordon statements seem to fit with a national trend where big national organizations working with wealthy donors and corporate executives pump huge amounts of money into elections. Jonah Edelman, executive director of Stand for Children–which coordinates “pro-reform” school board candidates races across the country and pumped more than $60,000 worth of independent expenditures into the Denver School Board Elections–said this about the Illinois legislature’s midterm elections, in which Stand for Children was heavily involved:

“The individual candidates were essentially a vehicle to execute a political objective, which was to tilt toward Madigan. The press never picked up on it. We endorsed nine individuals - and six of them were Democrats, three Republicans - and tilted our money toward [Democratic Illinois Speaker of the House Michael] Madigan, who was expecting … that all our money was going to go to Republicans. That was really a show of - indication to him that we could be a new partner to take the place of the Illinois Federation of Teachers.”

The fingerprints of national corporate organizations coordinating the money are all over the Denver School Board Race as well. A corporate reform group called A+ Denver hired a prominent supporter of school vouchers named Van Schoales to be its executive director. Schoales previously worked for the national privatization reform group called Education Reform Now, which pushes vouchers and which is funded, in part, by Rupert Murdoch and was run by Murdoch’s top aide former NYC School Board Chancellor Joel Klein.

In addition, the slate of pro-reform candidates has also been endorsed by the national organization Democrats for Education Reform (DEFR). “DFER’s endgame has little to do with learning and everything to do with marginalizing public-sector unionized workers and bringing down the cost of taxes for social programs,” notes the United Federation of Teachers. “It’s about creating new business and investment opportunities in areas that are still publicly run and serving as a pre-emptive strike against any hope for private-sector union renewal.”

Indeed, this point underlines the scariest part of many of those pushing so-called reforms of public education through pro-charter, pro-voucher, anti-teacher measures. While some of the liberal supporters of these measure are genuinely concerned about reforming public education to help children, others are involved in these privatization anti-union schemes because there is a great deal of money to be made in public schools. Controlling votes on public school boards can be very important to big corporations who stand to financially benefit from the various contracts for services and financial management that school districts control, as well as to developers seeking to buy former school land.

By way of highlighting the massive amount of money school boards can give to private corporations, consider the 2008 deal to lend Denver Public Schools system money cut by former Denver School Superintendent and current U.S. Senator Michael Bennet. It wound up costing Denver Public Schools $25 million more than it was initially expected to cost and the Denver School Board had to pay JPMorgan Chase, Bank of America and RBC (Royal Bank of Canada) Capital Markets. Bennet would later go on to collect $1.2 million from the financial sector as a candidate for U.S. Senate. In addition, RBC Capital Markets, which serviced the deal with the Denver School Boards and underwrites similar deals with 40 school districts, funds the news publication Education News Colorado, which according to Denver Classroom Teachers Assocation has run articles and op-eds critical of union-backed candidates like Emily Sirota.

Increasingly, it appears that outside corporate groups are becoming involved in school board races across the country from Illinois to Louisiana to Denver.

While the alliance of well-intentioned liberals and conservative corporate executive seeking to reform schools seems very well organized on a national level, the left seems to have no national response. Interviews conducted with union officials from both the National Education Association and the American Federation of Teachers indicate that for now, school board elections are something that state and local teachers union deal with on a case-by-case basis. On the left, there seems to be no national strategy to deal with the massive amounts of money pouring into school board election. The lack of national organizing could lead to more lopsided elections like the one in Denver.

“I believe they are trying to make Denver a model not just for the west, but to privatize education nationally,” says current Denver School Board member Jeannie Kaplan, who supported Sirota’s campaign. “My hope is that we in Denver can say no to the big money corporatizing, privatizing and charterization of our schools.”