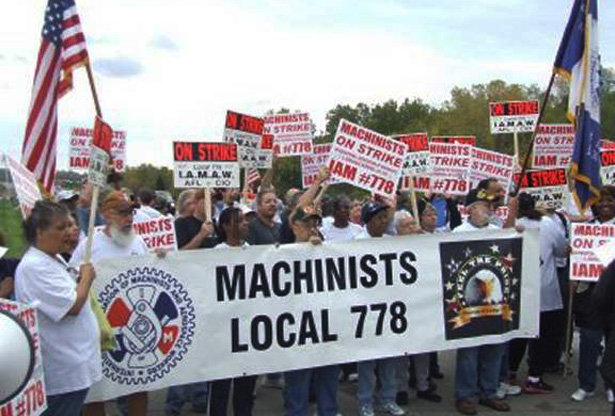 Is the Federal Government Helping to Bust Unions?

For the third time in three years, defense contractor Honeywell International Inc. is deploying union-busting tactics in a government-affiliated workplace–and a federal agency is failing to stop the corporation’s behavior. This raises questions about whether Honeywell, a top contributor to the Democratic Party in the 2010 midterm election cycle, is wielding political influence to successfully weaken unions.

In 2009, Honeywell threatened to bring in federal troops to replace Honeywell contractors threatening to strike at a military facility in Jacksonville, Fla. In 2010, the company brought in scab replacement workers to operate a uranium facility in Metropolis, Ill. (The federal government later ruled that Honeywell cheated on qualification tests so that it could replace striking United Steelworkers union members.)

Now, union workers on strike at a plant in Kansas City, Mo., allege that the Department of Energy (DOE) is abdicating its responsibility under federal law by allowing Honeywell to engage in illegal bargaining while the company attempts to force a concessionary contract on an International Association of Machinists and Aerospace Workers (IAM) union local. On October 10, 840 Honeywell workers–members of IAM Local Lodge 778 and contractors at a federal facility that produces components for nuclear weapons –went on strike, alleging that Honeywell had bargained in bad faith.

Local 778 Grand Lodge Representative Steve Nickel claims that Honeywell illegally bargained in bad faith by attempting to force the union to either accept concessionary contracts or go out on strike. Nickel claims that Honeywell informed them via express mail letter of their refusal to accept the union’s proposal before the bargaining period had expired at the end of October 7, and then prepared for a strike. He says the company engaged in take-it-or-leave-it bargaining when it refused to negotiate further. (Honeywell declined to comment for this story, but an ad the company ran in the Kansas City Star on November 8 read, “Honeywell has provided a last, best and final offer” and “continues to bargain in good faith.”

“In my fifteen years filing board charges, I have never seen such a clear-cut case of a company engaged in bad faith bargaining,” Nickel says.

Local 778 filed an unfair labor practice complaint with the National Labor Relations Board immediately after union members rejected Honeywell’s final contract offer in early October. But late last week, the NLRB ruled against the union, rendering striking union members ineligible for unemployment insurance and giving Honeywell the right to permanently replace workers. Late on November 15, the NLRB ruled against the union in an initial set of board charges; thus denying the workers the right to collect unemployment while out on strike as well as giving the company the legal authority to permanently replace the workers.

As a result of the ruling, many workers on strike became discouraged and some crossed the picket line. On Sunday, November 20, union members ratified a six-year contract, which both management and the union agree is largely the same contract Honeywell initially proposed. It includes a two-tier wage system (new hires are the lower tier), the elimination of defined-pension plans for new hires and the elimination of retiree healthcare after 2017. Retiree healthcare had been a sticking point for workers at the Missouri facility, given that they work with the toxic material beryllium, which is associated with high rates of lung cancer.

Since 2009, Honeywell has been confronting unions at its facilities across the country as it tries to reduce its labor costs. The Fortune 100 company based in New Jersey has demanded that workers accept a two-tier wage system that pays new hires roughly half of what current employees are paid. Honeywell calls for the adoption of a retirement system that would pay out new employees roughly $25,000-$30,000 total over the course of their career, Nickel says. The company has also refused–in Kansas City and elsewhere–to budge from its position that union workers drop current healthcare coverage in favor of the healthcare coverage nonunion workers receive, which is a high-deductible insurance plan mixed with a healthcare savings account.

“Some of these people can’t work until their ’60s, when they are eligible for Medicare. They wind up going on medical disability, so they need something for them and their families,” Nickel says.

Not the same old bargaining story

But there is another dimension to the Kansas City conflict that makes the struggle there more than just the now-familiar story of a corporation trying to push concessionary contract down a union’s throat. Federal contract provisions stipulate that because Honeywell operates the Kansas City facility as a contractor for the DOE’s National Nuclear Security Administration, the corporation can be reimbursed for the full cost of all wages and benefit increases that workers receive.

DOE service contract provisions similar to the federal Service Contract Act allow for the DOE to reimburse workers’ compensation. Department regulations give contract officers unilateral power to increase payment to contractors if any costs, including wages, go up (these officers can also refuse to cover such increases, if they exceed typical industry compensation packages). Increases have been routinely approved, according to the IAM, during the 12 years Honeywell has operated the Kansas City facility as the prime contractor.

So if it doesn’t ultimately bear the costs of its workers there, why is Honeywell so dead-set against the status quo when it comes to union workers’ wages, pensions and healthcare plan? The short (and counterintuitive) answer is that the company stands to profit from the strike–both financially and politically.

Before the strike began in October, Honeywell mangers had union workers over-produce nuclear weapon components in order to build up inventories, according to the IAM. Since the strike began, the company has used several hundred nonunion employees at the plant to continue some production and shipment of goods. According to Honeywell’s website, 203 shipments were sent out the week of October 31, 21 days after the strike began.

A crucial point that helps Honeywell’s bottom line is that the company’s contract with the federal government is fixed on products delivered, not labor cost. This means that if Honeywell keeps production normal at the Kansas City plant, it can claim the $7.5 million per month it would normally pay 840 striking workers as profits. The federal contract is fixed till 2013, so Honeywell could make a huge windfall profit by antagonizing workers, and inspiring them to remain on strike.

Behind the scenes DOE pressure?

But this struggle is about more than just corporate profits, according to union officials. By pushing for major concessions from workers, Honeywell may be currying favor with the DOE, which is looking to save money as politicians on Capitol Hill look to close the federal deficit.

In 2006, DOE attempted to implement the Directive 351.1, which “effectively forbids the negotiation of defined benefit pension,” according to the AFL-CIO Metal Trades Department. Because of strong opposition in Congress and a bitter fight between organized labor and the DOE, it was never implemented.

“The directive says that contractors will not be reimbursed for the costs of defined benefit plans for new hires, or for post-retirement health care,” and it will penalize contractors with defined pensions for current employees that cost above a certain amount, the Metal Trades department says (PDF link).

Although not in effect, it has still negatively affected many employees working for DOE contractors, according to AFL-CIO. In 2010 alone, contractors in five different facilities discontinued defined-benefit pension plans out of fear that Directive 351.1 might be implemented.

But Metal Trades Department President Ronald Ault says this is about more than a corporation hedging its bets against a potential regulatory change–the DOE is quietly pushing Honeywell behind the scenes to strip pensions and retiree health coverage so the agency can trim its costs.

“Honeywell would get reimbursed for whatever wage increases [workers] want,” Ault says. But company officials “do whatever the DOE wants them to do. DOE could absolutely step in and get involved, they could direct the contract.” Instead, he says, federal officials “quietly whisper behind the scene to implement DOE 351 to cut DOE’s costs. Nobody can screw you like your friends. We had better labor relations under [Bush appointed-DOE Secretary] Sam Bodman than [President Obama’s DOE Secretary Steven] Chu.”

By calling for workers’ benefits to be cut, Honeywell and its CEO David Cote–the only business leader serving on President Barack Obama’s 19-person deficit commission–improves their political image. (Given that it paid no corporate income taxes between 2008 and 2010 despite making $4.9 billion in profits, Honeywell needs to bolster its image to increase its chances of winning more federal contracts.) In the November 8 Kansas City Star ad, the company stated it “is committed to being a good steward of U.S. taxpayers’ dollars and federal assets.”

Finally, by demanding huge concessions, Honeywell is attempting to weaken its unions, as it has done throughout the country at both federal contractor and private-sector facilities. A two-tier wage system weakens solidarity by pitting younger workers against older workers. By forcing the union to strike, Honeywell hopes to crush the union’s willingness to resist concessions again.

Union workers say the DOE could be getting involved to help out workers and bring the strike to end. “DOE sits back and acts like they are non-participants when, in fact, they control nearly every aspect of our working conditions,” says Jay Puckett, an IAM member who works at the Kansas City facility.

DOE spokeswoman Gayle Fisher said the National Nuclear Security Administration “has been an interested but neutral observer during the contract dispute. We would like to see the negotiations continue so that an agreement can be reached and everybody can get back to work and help fulfill our important mission here in Kansas City.”

Beginning in 2009, at about the same time that Honeywell began aggressively confronting unions at facilities in Florida and Illinois directly connected to federal contracts, Honeywell has sharply increased its political donations; in 2010, the company’s political action committee was the top PAC contributor to the Democratic Party.

In a sign of the company’s increasing connection to the Democratic Party, earlier this month Honeywell hired Democratic Minority Whip Steny Hoyer’s former Deputy Chief of Staff Stacey Bernards as its new vice president of government relations. CEO David Cote has also done political favors for the White House and the Democratic Party: He helped introduce the president’s stimulus package at a press conference in early 2009 and was crucial to keeping the powerful Chamber of Commerce from opposing the legislation, helping to give the Obama administration a crucial first victory.

Labor rights used to be a core value of the Democratic Party. But its growing ties to Honeywell–which has lately distinguished itself as clearly anti-union–shows that these days, the party is more interested in management.

This story was updated on Monday November 21 to note the outcome of Sunday’s IAM contract ratification vote.