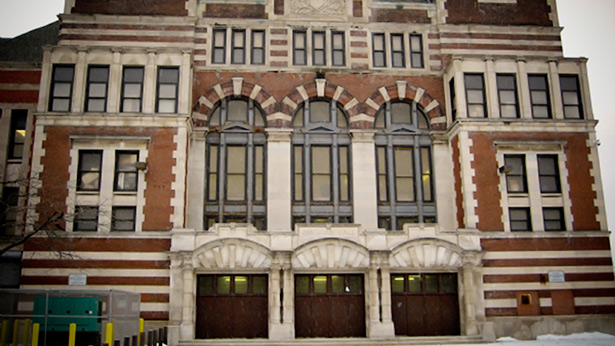 The Poverty of School Reform

Poor black students are still not benefiting from CPS's sweeping reforms. Only half graduate, and a fifth drop out each year. The achievement gap between black and white students has also grown, counter to national trends.

This story continues "The Other Chicago," an In These Times investigation into the lives of those African-American youth who have borne the brunt of the Great Recession. The five-part series focuses on the struggle of young African-American men, whose rate of unemployment dwarfs that of their white counterparts. In de-industrializing Chicago, a highly segregated city that is one-third black, their plight is particularly acute. Other stories in the series include:

John Marshall Metropolitan High School, located in Chicago’s mostly black East Garfield Park neighborhood, underwent a highly touted transformation last year when it became one of Chicago’s “turnaround” schools. Started under former Chicago Public Schools (CPS) CEO and current Secretary of Education Arne Duncan, the turnaround program picks low-performing schools to receive millions of federal, city and private dollars. CPS gives the school buildings a makeover and fires the entire staff, from principals to janitors. Axed employees can re-apply for positions in the school system, but according to CPS, only 70 percent are rehired.

Reactions from the students are expectedly mixed. Marshall junior Darrell Jackson said he lost a lot of good teachers, but got more out of the new 90-minute periods. Johnnie Fort, a senior, isn’t a fan of the security cameras in the hallways and classrooms. Shaking his head, he says, “It’s like we was dogs.”

Students at Orr Academy High School, another turnaround school, are also upset by the focus on security–which includes a police processing center on school grounds to immediately book arrested students. “They waste so much money on the metal detectors,” says Orr junior Kathleen Jenkins, “and you can still get a knife in, if you put it in your shoe. But they’ll take away your drinks, thinking it’s liquor.”

Jenkins and senior Eric Haden are part of Blocks Together, a student-led group that builds relationships between students and staff. They push for restorative justice projects, such as peer juries, to bring empathy into the harsh penal atmosphere of the school. What’s lacking, according to them, are the resources needed to hire counselors and fund peer mediation.

For 20 years, CPS officials have instituted sweeping reforms. A September report by the University of Chicago Consortium on School Research shows some significant victories, like the citywide graduation rate rising from 46 percent in 1996 to 66 percent in 2009. But largely, poor black students are still not benefiting. Only half graduate, and a fifth drop out each year; reading comprehension has remained consistently low; and the achievement gap between black and white students has grown, counter to national trends.

As Duncan now pushes his turnaround model on the nation, Chicago Mayor Rahm Emanuel and CPS CEO Jean-Claude Brizard, who took office in May, are doubling down on the approach of their predecessors. On November 29, they announced that 10 schools would become turnaround schools next year, bringing the total number to 27.

‘The children have lost hope’

To longtime education organizers like Jitu Brown of the Kenwood-Oakland Community Organization (KOCO), the program is just another in a long line of failures. “Reconstitution, reorganization, charter schools–all these initiatives have failed miserably,” Brown says. “They’re window dressings. You have to address poverty before the problems of education.”

Surrounded by shuttered businesses, rampant violence and the faraway world of the global city’s skyline, many of Chicago’s black youth have been living “in a permanent state of recession,” Brown says. “There’s always been a consistent disinvestment in youth, period. There’s no structure for real development. Now, with new [city and state] budget priorities, it’s made a bad situation worse.”

Since the housing foreclosure crisis began, Brown has seen more transient young people and displaced families living with relatives or in shelters. Whereas a family used to scrape by on minimum wage jobs at gas stations and grocery stores, they’re now losing even those low-paying positions. Students, who in the 1980s could rely on summer employment, can’t find seasonal work. According to Brown, 39,000 students applied for 11,000 summer jobs in Chicago this year.

What greets students after graduating–or dropping out–is equally dire. According to a 2009 study by University of Wisconsin-Milwaukee, 50.3 percent of Chicago’s black males are jobless. And according to a February Chicago Reporter article, 32 percent of black Chicagoans live in poverty, the highest poverty rate for African Americans in any American city. With white Chicagoans facing a 10 percent poverty rate, the city boasts the largest racial disparity among its poorest citizens. Endemic poverty among black students can be inferred from school lunch program data. An analysis of Illinois State Board of Education numbers shows that in 188 CPS schools in predominately black neighborhoods, 95 percent or more of the students qualify for the free and reduced lunch program, including 14 schools that have 100 percent eligibility. It adds up to create an overwhelming sense of instability.

“The children have lost hope,” says Phillip Jackson, director of the Black Star Project, a community education hub in Bronzeville. “I see them now as two groups–those who have actively given up and those that have subconsciously given up.” When President Obama was elected, he says he could see the pride “even in crackheads’ eyes” amid the spontaneous celebrations along Martin Luther King Drive. Now those eyes are empty and despondent.

The former CEO of the Chicago Housing Authority and a former CPS official, Jackson now devotes his time and energy to fight this hopelessness. His far-reaching projects–from after-school mentoring to the Deborah Movement, which organizes women to mentor, protest and patrol neighborhood streets–bring parents, teachers, volunteers and students together.

But as to how Chicago got to this point, where only three out of 100 black males earn a college degree, where, in the last three years, 263 young Chicagoans have been killed and 4,000 have survived a shooting, Jackson casts blame widely. “Schools, communities, churches and the government have all failed young black children.”

In the year following 16-year-old Derrion Albert’s fatal beating in a melee near Fenger High School in September 2009, 78 Chicago children were killed. Jackson keeps a list of their names, ages, dates of assault and causes of death. He runs his fingers across the names and says, “These didn’t happen in a vacuum.” The children saw them or heard about them, but “didn’t process these deaths. They weren’t given treatment for PTSD, though they are living with post-traumatic stress. Now they’re operating under a siege mentality–they don’t know if they’re going to be alive tomorrow.”

“If you go to a fourth-grade classroom,” says Brown, “and ask who’s seen someone get shot, ninety percent of the class will raise their hands. If you ask who lives near a liquor store, who’s seen a drug deal, who’s seen the police beat someone up, you’ll get the same response.” To Brown and Jackson, the crushing poverty and the violence that it breeds is the root cause of low-performing students and schools. “Oppression is a culture that has taught kids this is what they deserve,” Brown says.

Making change, from the top and bottom

When any school on probation is liable to be overhauled–and 289, half of all city schools, are on probation–what good can turning around 20, 30 or even 100 schools accomplish? The problems run deeper than individual schools.

The way out, according to both Brown and Jackson, is through organizing and horizontal leadership. No top-down program hatched by school system administrators, however well-intentioned, is going to fix these problems.

The Black Star Project’s Saturday University teaches a curriculum drafted by parents and community members that expands upon CPS curricula, to include such topics as African-American history, personal development and financial literacy. What started as four classrooms has grown into a network of 16 active sites on the city’s South and West Sides. Jami Garton, Black Star’s director of program development, says, “Parents don’t feel qualified to teach their own kids. We’re reversing that myth, saying, in fact, you’re the best ones to do it.”

Brown and KOCO created a model for sustainable success with their Bronzeville Global Achievement Village. They asked parents to forget about budget constraints and imagine the type of education they want for their children. Months of cooperative labor birthed a program that would partner with Dyett High School and its neighborhood feeder schools to streamline curricula between grades and bring much-needed focus to laboratory sciences and leadership.

But CPS has other plans. On November 30, it announced that Dyett, along with three other schools, would be closing next year.

This story continues “The Other Chicago,” a five-part series supported by the Local Reporting Initiative of Community News Matters, underwritten by The Chicago Community Trust with help from the McCormick, MacArthur, Knight and Driehaus Foundations, and administered by The Community Media Workshop and The Chicago Reporter.