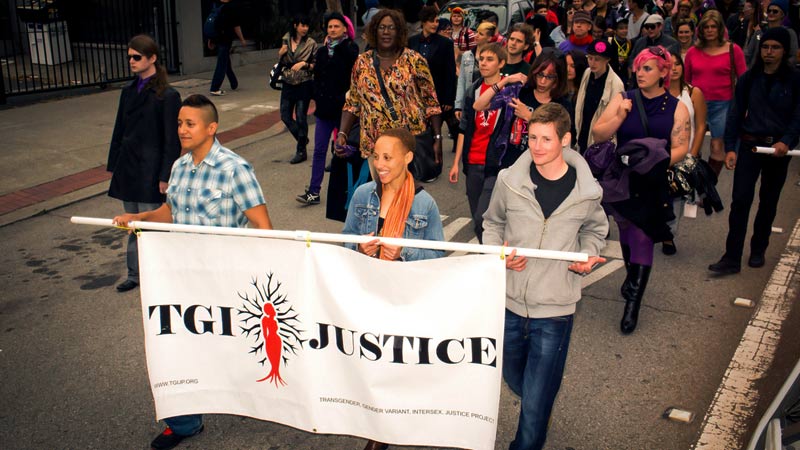 While marriage and military enlistment have monopolized the mainstream gay rights agenda, a trans/queer prisoner justice movement has been quietly gaining momentum.

“Imagine being told, ‘You have no right to be who you are,’ ” says Faith Phillips, remarking on her first days in prison. The transition was even harder for Phillips than it is for most prisoners: Phillips, a transgender (trans) woman, was held in a men’s prison.

According to recent studies, 16-33 percent of trans people have spent time behind bars, compared with less than 4 percent of the general U.S. population. Another statistic provides a clue as to why: 26 percent of transgender people report being fired because of their gender identity. Forced into the underground economy, some enter prison for “survival crimes” such as sex work. Once inside, people who don’t conform to the gender regulations—both written and unwritten—face a form of punishment far harsher than their original sentences.

Growing up in California’s San Bernardino County, Phillips was abused by her transphobic father and was one of the few people of color in her community. When she landed in central California’s Avenal State Prison at 21, she witnessed the same ill treatment of trans people she’d experienced as a child. So, in March 2008, when a queer prisoner was threatened with a transfer to a ward where he knew he’d be unsafe, she staged a protest, refusing to leave the prison yard when the correctional officers (COs) announced that it was time.

“Might as well take me to the hole, because I’m not moving,” she remembers telling the COs. “Then the whole queer community said, ‘We’re going to the hole, too.’ ” Night fell. The temperature dropped. Prisoners who were inside managed to push blankets out to the protestors underneath a doorway. Eventually, the transfer of the at-risk prisoner was cancelled.

Phillips and her fellow prison-yard occupiers also came up with a list of demands that included HIV and sex education, the return of appropriately gendered clothes that had been taken from them, an end to harassment by staff, and a lesbian, gay, bisexual, trans, queer and intersex support group. The prison’s warden agreed to their demands (apart from the clothing) after a sympathetic captain pled their case.

In retribution for her activism, Phillips says, she was put through a series of prison transfers, drugged and sent to solitary confinement. She claims prison administrators threatened, “If you ever think about doing this again, we’ll bury you.” But Phillips soon became an information collector for the San Francisco-based Transgender, Gender Variant, Intersex Justice Project (TGIJP), one of a handful of trans prisoner support organizations that documents abuses inside prisons.

While marriage and military enlistment have monopolized the mainstream gay rights agenda, a trans/queer prisoner justice movement has been quietly gaining momentum. But the movement’s critique of the prison system often brings it into conflict with LGBT rights groups that advocate for hate-crime legislation or other strategies that rely on police to secure justice for queer people. Currently, only 12 states include gender identity or expression in their hate crime laws. When New York State was considering legislation that would have extended hate crimes statutes to transgender people, groups representing queer people of color, such as the Audre Lorde Project, opposed the bill on the grounds that it gave “a deeply flawed, transphobic, and racist criminal legal system” the discretion to impose longer sentences.”

Wesley Ware, director of the New Orleans-based project BreakOUT!, which organizes queer youth around prison issues, says that his group is focused on changing the conversation from hate-crime legislation to how “the police are terrorizing black transgender women on the street, every single day.” This July, BreakOUT! helped to secure a landmark legal decree from the Department of Justice mandating trans-sensitive practices at the notoriously discriminatory New Orleans Police Department. If a federal judge approves the decree, the NOPD could not legally stop people based on sexual orientation or gender, would have to conduct same-gender searches according to the subject’s gender identity and would have to refer to trans people by their preferred names and gender pronouns.

Queer-rights groups also successfully lobbied for California’s Gender Non-Discrimination Act (AB 887), which went into effect in January and includes provisions that may translate into more livable conditions for trans prisoners. Among other things, the act’s clause regarding “public accommodations” has meant that more trans people are now held at more transfriendly prisons. But problems remain. Two trans women went on a hunger strike in September to protest their unfair treatment in a San Diego prison.

Though legislative reforms like AB 887 may bring material improvements, TGIJP remains focused on uniting queer prisoners and allies to support each other and challenge the prisonindustrial complex as a whole. Now out of prison, Phillips is pursuing a law degree and continues to organize with TGIJP in Los Angeles. She and other authors have put out the guidebook Surviving Prison in California: Advice by and for Transgender Women. Along with pointers on how to get HIV treatment, the authors stress that community power is one of the best ways to stay safe. “If [the police] can divide us into different groups … then we are unable, as a united community, to fight the real enemy… the corrupt system that defiles and oppresses us as human beings.”

Toshio Meronek is San Francisco-based writer who has reported for Al Jazeera, The Nation and Vice. His work also appears in Captive Genders: Trans Embodiment and the Prison-Industrial Complex and The Long Term: Surviving and Resisting Life in Prison. He is a former editor of The Abolitionist, the newspaper of the anti-prison industrial complex organization Critical Resistance. Follow him on Twitter at @tmeronek.