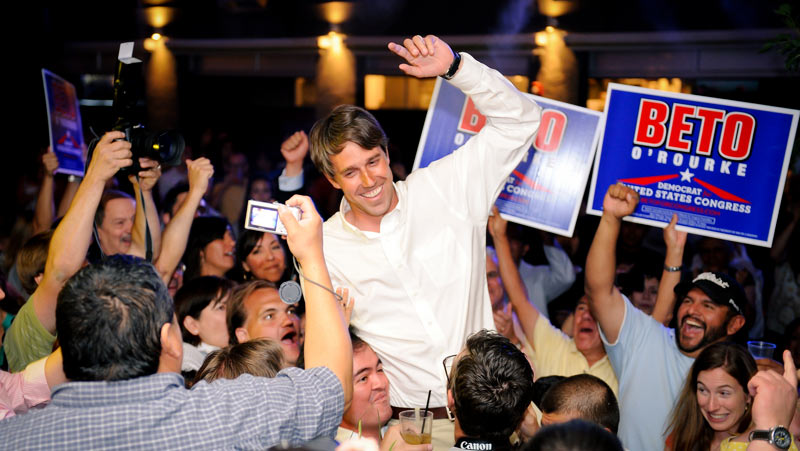 Beto O’Rourke is on his way to shake up Congress.

Let’s do what we think is right and not apologize for immigration. Let’s tell people what a huge positive it is. It defines who we are as a country to the rest of the world.

One of the major upsets of the 2012 election season has already happened, and it was a big win for progressives.

In late May, Robert “Beto” O’Rourke won the Democratic primary contest in Texas’ 16th Congressional District, which is largely comprised of the city of El Paso. The incumbent, Silvestre Reyes, who has held the seat since 1997, was well-funded and had been endorsed by both Bill Clinton and Barack Obama. He was also ranked among the least progressive Democrats in the House by the website Progressive Punch.

O’Rourke won the primary with an aggressive grassroots campaign. Three-fourths of his contributions came from local donors. By contrast, just one-fourth of Reyes’ funding was local. By his own estimate, O’Rourke knocked on more than 16,000 doors in the course of the primary campaign, and he had the help of what a local newspaper called an “army of volunteers”— more than 1,000 people who also canvassed homes and worked the polling sites on election day.

O’Rourke, 40, is a fourth-generation native of El Paso. The co-founder of an El Paso-based IT company, he served on the city council from 2005 to 2011. In 2009, he coauthored a council resolution calling for the United States to re-examine its war on drugs.

That stance inspired advocates of drug law reform to donate to O’Rourke’s campaign. Reyes tried to use those donations against him in the primary, arguing that O’Rourke was funded by “dangerous and radical interests.”

This line of attack didn’t have much effect in a race that was dominated by more pressing local issues: the stagnant El Paso economy, inadequate V.A. health services and long waiting lines at the border crossings into Mexico.

O’Rourke thinks that if he wins in November, he’ll have something important to add to national debates around drug laws and immigration, issues on which he believes both parties are badly misguided. The GOP drives the debate ever-further to the right and the Democrats, fearful of appearing soft on crime, cower.

O’Rourke will likely get the chance to bring some sanity to Washington. The 16th District is an anomaly in the state’s deep-red political landscape, its population about 80 percent Hispanic and heavily Democratic. It went for Obama by about 33 points in 2008.

In These Times recently put a few questions to him.

You’ve noted that cities with large immigrant populations are also some of the safest in the United States. That seems counterintuitive—the border has a reputation for being so violent.

El Paso is the safest city in the country with a population over 500,000. It may be because you have very progressive law enforcement officials here who refuse to enforce federal immigration laws. The ability of people, regardless of status, to feel welcome here is key. And the really strong, family-centric values that you have in immigrant communities have to be a part of it.

The border is the safest part of the state. But for so many, the border has become this convenient foil to look tough on crime, tough on immigration, tough on these Mexicans who want to come and take our jobs and our benefits, and give our kids drugs.

How do you change that narrative?

It’s a 2,000-mile border  from San Diego to Brownsville; I stick to El Paso’s story. We’re the largest bi-national community in the world. The other story is about why you have the safest city in the United States, El Paso, next to Ciudad Juárez, which from 2008 to 2011 was the deadliest in the world, bar none.

So it’s about telling El Paso’s story, and how immigration has been a net positive and how the policies that we have in the U.S. further the violence on the other side of the border. Talking about the positives is our challenge—versus what Democrats have been doing for the past 20 years, which is apologizing for the border and riding along with the Republicans on this premise that we’ll “secure” the border, then we’ll pivot and reform immigration laws. Unfortunately, our president has played into this idea that we’ll do all these things to satisfy the hardliners on the other side, and then we’ll do immigration reform.

The truth is you’ll never satisfy those people. You build 600 miles of walls, they’ll want another 1,400 miles. You spend billions, they want $20 billion.

So let’s do what we think is right and not apologize for immigration. Let’s tell people what a huge positive it is. It defines who we are as a country to the rest of the world. It’s an amazing, positive message for other countries to see that we truly are a nation of immigrants.

You’ve been a supporter of drug law reform, and several states are grappling with that issue in ballot initiatives this fall, so it seems to be gaining traction. Do you see it as one of your priorities if you’re elected?

I want people to understand the consequences of the drug-war policies that we’ve had in place for the past 40 years, which do far more harm than good. They’re very tied to the deaths that we’ve seen in our community, they’re a waste of taxpayer dollars and they don’t achieve a single goal laid out in the drug war. So, can we recognize that what we’re doing is a failure? Yes? Okay, let’s talk about what should replace that. And I want to make sure that El Paso and communities along the U.S.- Mexico border have a very active role in shaping that policy. Because frankly, for 40 years we’ve just been on the receiving end of a lot of policies that are dreamt up in D.C. without any understanding of the implications for those of us living here.