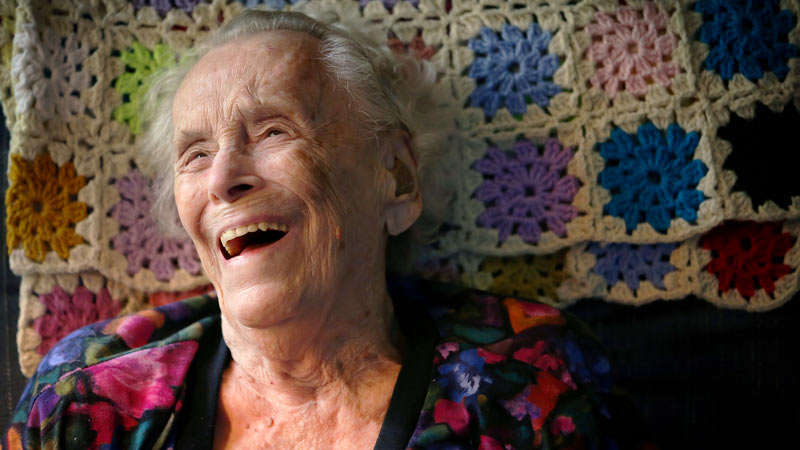 Carolyn Gruber, 91, laughs during a Meals on Wheels delivery on September 21, in Glen Spey, N.Y. She relies on the federally funded service for hot daily meals. (Photo by John Moore/Getty Images)

A Poverty of Empathy

The GOP’s social welfare philosophy dates back to 1818.

The Society’s report brings to mind Mitt Romney’s comment about the 47 percent: “My job is not to worry about those people—I’ll never convince them that they should take personal responsibility and care for their lives.”

In 1818, the Society for the Prevention of Pauperism, New York’s first anti-poverty organization, issued a report advocating the need to relieve “the community from the pecuniary exactions, the multiplied exactions, and threatening dangers” associated with paupers.

These middle-class worthies were alarmed at the cost of heating the almshouse in winter, the appearance of women and children scavenging for coal and food scraps along city streets, and the able-bodied men left idle by a serious economic downturn. The report listed the causes of urban poverty: intemperance in drinking, idleness, “want of economy,” gambling, pawnbrokers and “imprudent and hasty marriages.”

Nowhere in the 20-page document did the authors mention the twin burdens of urban laboring people: low wages and few jobs. Instead, the report framed poverty as a moral failure, arguing that the “habits and vices” of the poor need to be remade. The Society later suggested installing a running wheel in the poor house—a massive machine combining the grueling monotony of a hamster wheel and a Stairmaster—to train the poor in the discipline of work.

The Society’s report brings to mind Mitt Romney’s comment about the 47 percent: “My job is not to worry about those people—I’ll never convince them that they should take personal responsibility and care for their lives.”

Yet unlike Romney, many Americans are indeed worried about poverty. They feel themselves slipping downward from an already tenuous middle- or working-class style of life. And no one wants to face up to the inadequacy of America’s social safety net.

Like members of the Society for the Prevention of Pauperism, many in Washington reframe poverty as the opposite of work: Those relying on government anti-poverty funds are weak, dependent, or mired in some kind of antisocial marginal culture. Without a strict work requirement, America will become a “nation of government dependency,” said Mitt Romney in August.

Lost in the ongoing welfare debate is the fact that poverty often accompanies work, as Barbara Ehrenreich demonstrated in her 2001 investigation of minimum-wage earners, Nickel and Dimed: On (Not) Getting By in America. Government statistics back her up. A significant number of employed Americans are eligible for the federal government’s Supplemental Nutrition Assistance Program, or food stamps. Most of the people receiving government housing vouchers are employed.

It’s not that Americans cannot do the math, but rather that we tend to see the poor as a separate, easily defined group. The nation’s official yardstick for measuring poverty was developed in 1963-1964 by Mollie Orshansky, an obscure researcher in the Social Security Administration. Orshansky’s “poverty thresholds,” which are used today, were based on a series of surveys of American families and Orshansky’s calculations of household need versus spending. Orshansky worked out 124 poverty thresholds for 35 family types classified according to age, sex, race, size, workforce participation, and farm or non-farm employment.

The thresholds, which Orshansky considered “arbitrary but not unreasonable,” might seem less reasonable today, since they were based on a 1955 study finding that American families spent fully one-third of their post-tax income on food—more than they spent on housing. Since at least 1980, most families spend significantly more on housing than on food. Yet, the method for calculating the poverty line—the income level determining who is classified as poor and eligible for government anti-poverty programs—has changed very little. Today, a family of four living on $22,313 or an individual living on $11,139 are designated poor.

Orshansky’s calculations, as many researchers recognize, closed off efforts to define the poor in relative terms—in relation to median income, for example—or to define poverty in relation to broader indicators, such as access to education, healthcare, transportation or housing. What gets lost in government statistics and demographic snapshots is that most of America’s poor move in and out of low-wage jobs and that poverty typically is triggered by a single event—divorce, serious illness or job loss. The poor really are not different from others, they just have less money.

The poverty line, though a concise gauge, hardly encompasses the complex forces shaping the lives of America’s poor. Most significantly (and most deceptively), the thresholds establish the poor as a group set apart from the rest of us.

This idea is promoted by the wildly popular and broadly critiqued work of Charles Murray, a fellow at the American Enterprise Institute, who tried to link IQ to poverty in his 1994 book The Bell Curve (coauthored with Richard J. Herrnstein). More recently, in Coming Apart, a distinctly 21st-century twist on 19th-century eugenics, Murray effectively taps into that wellspring of public criticism and academic writing that links poverty to the impoverished person’s culture. This is a version of culture that runs close to a biological condition; it is passed from parent to child, so deeply ingrained that it is immutable. Reviewing Coming Apart in the New York Times, Nicholas Confessore writes, “You will learn about working-class laziness but will find little discussion of the decline of trade unions or the rise of a service economy built on part-time work without benefits.”

Victims of the Very Visible Hand

Historians label the early decades of the 19th century the “market revolution.” It was a period much like the present: A major restructuring of work, housing, and the production of consumer goods led to several decades of economic booms and busts. In the first half of the 19th century, this restructuring meant the decline of household production of things like fabric, clothes, candles, soap, butter and other necessities. Instead of bartering with neighbors, people paid paper money for goods produced miles or oceans away.

The market revolution fueled the breakdown of the craft system. Young men, no longer apprenticed to older craftsmen, were increasingly paid cash wages for work in workshops producing boots, barrels, furniture and other goods. Rather than receiving room and board in a master craftsman’s home, young urban men used their wages to pay rent in a boarding house or in the newly constructed tenements. Some of these new wage workers propelled themselves into the urban middle classes as merchants and manufacturers. Others were left at the mercy of seasonal employment and low wages, unable to support wives and children, and often dependent on city alms for food and coal.

“Globalization” is the term we apply to the current economic restructuring. It’s a metaphor that hides the hardship caused by the movement of manufacturing jobs overseas, the speedy Internet transactions that undercut small businesses, and the devaluing of skills that once promised a middle-class life. Poverty is the result for many people, not because they are weak or lazy or lack a culture of work, but simply because their skills, education or work experience have rendered them obsolete in the newly restructured, globalized economy.

At a time when one of America’s major parties advocates policies not dissimilar to the Society for the Prevention of Pauperism, we must remember that poverty for some is a natural and inevitable result of a rapidly changing economy. Government-funded training programs, transformations in public education and generous public assistance programs are no doubt necessary. But what the poor and working classes also need is honesty.

It is simply wrong to pin economic change on so-called natural forces or business cycles. Economic restructuring is driven by human action: by tax policies encouraging innovation and trade in some areas, by government investments in research and infrastructure, and by the hard work and ingenuity of an educated workforce. It is also driven by government policies that undercut wages, subsidize corporate expansion, and deny struggling families decent education and social services.

Who benefits and who suffers in a changing economy will be determined by politicians who are answerable to a politically engaged public that demands sensible government policies—policies that recognize that the poor are no different from anyone else.

Margaret Garb is the author of Freedom’s Ballot: African American Political Struggles in Chicago from Abolition to the Great Migration.. She is working on a history of poverty and work in the U.S. from the Civil War to the Reagan era.