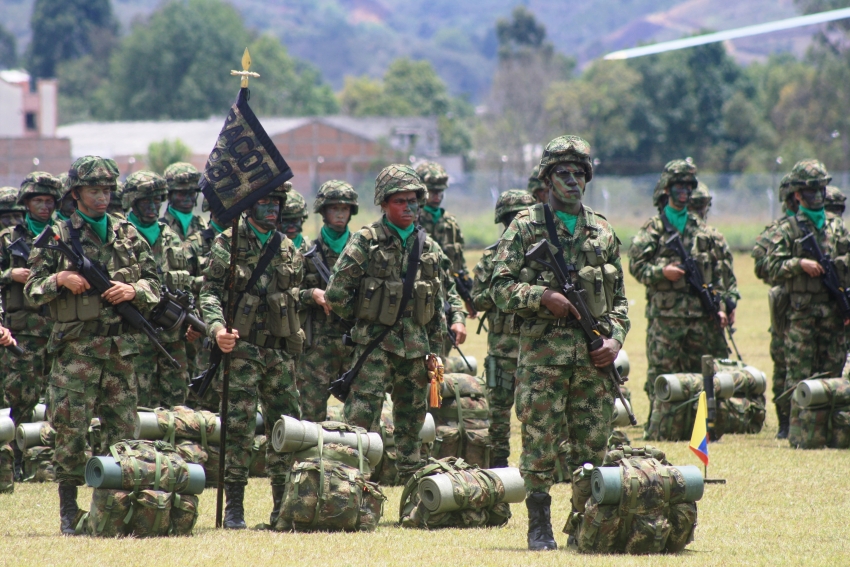 Soldiers of the 29th Mobile Brigade, ready to be deployed to the front lines in Popayán, Colombia on Oct. 5.

Truce or Dare in Colombia

"When the death threats come, they're sent by text message."

COLOMBIA—The bombs started falling just after midnight on Sunday, Dec. 2 near the town of Ricaurte, along Colombia’s rugged and heavily forested border with Ecuador. Explosions rocked the jungle as a squadron of Super Tucano attack aircraft, operated by the Colombian air force, dropped a cluster of 500-pound, computer-guided smart bombs on three encampments of the Revolutionary Armed Forces of Colombia (FARC). When the salvo ended, at least twenty dead FARC guerrillas lay dead in the twisted mess of smashed huts and heat-fused weapons. Among the bomb-mutilated corpses were the unit commander of an entire FARC column and his third in command. The column’s survivors had scattered into the bush, a broken force.

“The FARC insurgents [were] a threat to peasants and indigenous residents in the area,” says General Jorge Segura, who commands the Third Division of the Colombian Army and oversaw the strike near Ricaurte. Segura tells In These Times the operation was part of an “integrated strategy” aimed at “ending the intimidation and terrorism of the FARC.”

The Ricaurte attack came even as the Colombian government was engaged in historic peace talks with the leftist FARC in an attempt to end five decades of civil war. The roundtable began in Norway in October and moved to Havana, Cuba, a month later. But little has been accomplished so far, and both sides say the talks are likely to drag on for months. Hundreds of thousands of people have been killed and 3-5.5 million have been displaced by the conflict that has endured for nearly 50 years. Dozens of government troops and civilians have lost their lives since the peace talks were announced.

When the latest round of talks began in Havana on Nov. 19, the FARC called a truce. However, the administration of President Juan Manuel Santos has refused to acknowledge the ceasefire and continued  military operations , such as the Cauca bombing on Dec. 1, perhaps hoping to pressure the FARC’s representatives at the negotiating table.

“We’re engaged in a permanent offensive against the bandits of the FARC,” says General Segura. “There can be no peace without victory.”

But the absence of either peace or victory has caused support for the talks to wane among average Colombians, who don’t see their own interests represented by either side in Havana. During the first week of December, thousands took to the streets across the country, to protest the lack of public participation in  the talks, and to demand improved living conditions, education and health care.

Government forces have gained ground against the FARC over the last decade, largely thanks to military aid from the United States. But much of the country, especially in rural areas, remains in the hands of various armed militias, who continue to do battle with the military and each other for control of strategic resources such as gold mines, shipping routes and arable land for producing narcotics.

Although most Colombians are hoping for an end to one of the world’s longest-running civil wars, a treaty with the FARC is not, in itself, likely to end the drug-fueled conflict that plagues the countryside.

“A lot of the FARC leadership have realized they’ll have to demobilize,” says Adam Isacson of the Washington Office on Latin America (WOLA), a human rights NGO.

“But that’s not going to end violence and drugs,” Isacson says.

In the troubled Cauca Department in southwestern Colombia, some sources estimate roughly 25,000 people were displaced by conflict-related violence in the last year alone. Overall, Colombia is home to one of the highest number of internally displaced people in the world. Most are peasant farmers and indigenous communities living in outlying regions.

Here in Cauca, many residents describe a life of constant terror. Some 70 members of the local Nasa tribe have met violent deaths in Cauca since the start of 2012—many of them the victims of targeted assassinations.

“When the death threats come, they’re sent by text message,” says Diana Perafán, a nurse with the Nasa, holding up her battered cell phone, which displays an anonymous promise to lop off her head with a machete. Perafán has been receiving such messages for weeks. She believes she’s been targeted because of her work treating the wounded and traumatized in Nasa communities such as Toribío and  Caloto.

Perafán says the death threats she’s getting could be coming from the FARC, who maintain a strong presence in Cauca—or any of the other armed groups that also operate in the area, which is a major hub for cocaine production and trafficking.

“Just the fact that they can send texts from an anonymous source tells you something about how powerful these groups are,” Perafán says during a hushed interview in a café in Popayán, the regional capital. “It means they’ve got funds. Access to some kind of tech support. Whoever it is, they know what they’re doing.”

In addition to the FARC, Colombia is also home to a dozen or so powerful, right-wing paramilitary groups with names like Águilas Negras (Black Eagles) and the Colombia Revolutionary Popular Anti-terrorist Army (ERPAC). According to both the United Nations and Amnesty International, these militias, originally commissioned by the army to help combat the FARC, have actually been responsible for more killings and human rights abuses than the FARC itself.

Major players in the drug trade, the militias control vast swaths of the countryside and have forced whole communities to abandon their homes and businesses. In Cauca, high schools and soccer fields overflow with evacuees fleeing the violence. Many of them end up on the streets in crowded urban slums.

“The violence caused by the paramilitaries, the struggle among criminal armies for supremacy, is tearing apart the fabric of Colombian society,” says Dr. Jairo Ortiz, a political science professor at the University of Cauca. Ortiz also points out that a mass demobilization of the FARC might also allow these militias to expand their territory.

“Colombia is facing a human rights crisis that’s going on right now,” Ortiz says. “But nobody is talking about that [at the roundtable] in Havana.”

“The fighting could go on for decades”

The FARC delegates to the peace conferences have remained upbeat about the process, even after the government’s attack near Ricaurte—the worst blow to the rebels since the talks began. Yet many observers wonder whether Latin America’s oldest insurgency can convince all of its units to lay down arms and demobilize if their leadership orders it. Several alleged violations of the FARC’s self-imposed Nov. 19 ceasefire call into question whether top-level officers can exercise control over its many far-flung cells.

“It could be hard to convince local commanders to turn in their weapons and go to jail,” admits WOLA’s Isacson. Motivated by the lucrative drug trade and accustomed to the warlord lifestyle, many of the FARC’s commanders may prefer to keep on fighting, perhaps under another name, instead of coming in from the jungle.

But the biggest obstacle to peace might be the Colombian government’s reluctance to include meaningful economic reforms as part of the peace package. The Santos administration has yet to prove that it’s willing to confront deep-rooted problems like mass poverty and land restitution—the same issues that caused the FARC to take up arms decades ago, and still a part of their peace agenda.

“The talks in Cuba have so far failed to address the fundamental causes of poverty and suffering in the country,” says Dr. Ortiz, who estimates that 52 percent of Colombians remain deeply impoverished.

“The great number of hopeless young people feeds the ranks of both the FARC and the paramilitaries,” Ortiz explains. “The state doesn’t offer much of a future, so there’s a strong incentive to turn against it.”

According to Dr. Antonio Navarro Wolff—a former commander of the guerrilla group 19th of April Movement (M-19) and ex-governor of Cauca’s neighboring Nariño Department, where the 20 guerrillas were killed on Dec. 2—if the historic parlay in Havana fails to address social justice and development needs, other insurgencies will rise up to fill the void left by the FARC.

“For the last 25 years in Colombia, whenever one group had demobilized, another has come along to take its place,” says Dr. Wolff, who lost a leg to the conflict as a young man.

Wolff also says that the FARC are still capable of waging war against the government if the peace talks collapse. In 2006, a U.S. Department of Justice indictment claimed FARC was supplying 50 percent of the world's cocaine. And with over 158,000 acres of coca growing within its borders, Colombia is the world’s leading cultivator, which means a potentially endless supply of drug-related funding for FARC.

“If we can’t make peace now,” says Wolff, “the fighting could go on for decades.”

This is an expanded version of a piece that appeared January 2013 issue of In These Times.