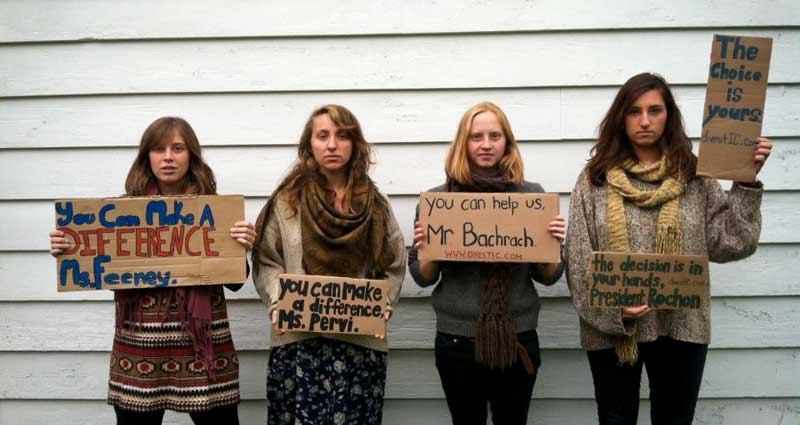 On Oct. 10, 2012, Divest Ithaca College called on the school's board of trustees to dump fossil fuel funds. (Photo courtesy of 350.org).

Divesting for a Greener Planet?

“Obviously Exxon is not going to blink twice if a single university⎯or even 30 universities⎯divest,” says Sophie Lasoff, an organizer of New York University’s divestment campaign.

“We’re jumpstarting a new movement, and we need your help,” announced author and 350.org founder Bill McKibben as he launched a cross-country tour in November 2012.

McKibben and 350.org have long been at the forefront of the fight against global warming, but the “Do the Math” tour sought to enlist climate activists in a new phase of the struggle. McKibben asked citizens to take direct aim at the fossil fuel industry, or, as he puts it, “Public Enemy Number One to the survival of our planetary civilization.” Heeding his call, activists have launched a campaign to pressure universities, religious institutions and local governments to divest their holdings in oil and gas companies—freezing any new investments immediately and dumping any current ones within five years.

With more than 200 such campaigns now underway at colleges and universities across the country, students are taking the lead.

“Students are looking for a way to fight for change commensurate with the scale of the problem,” McKibben tells In These Times. “They’ve already convinced most of their schools to ‘green the campus,’ which is great⎯but everyone soon realizes that an energy-efficient arts center is not going to solve climate change.”

The movement’s first success was at Unity College in Maine, where the board of trustees voted to divest in November 2012. Two other colleges have since followed, but students at most schools face an uphill battle. At Harvard, where 72 percent of students voted in November to divest from the fossil fuel industry, President Drew Faust opposes divestment. Instead she is starting an alternative university fund, through which a portion of Harvard’s $30.7 billion endowment would be invested according to socially responsible criteria.

“Obviously Exxon is not going to blink twice if a single university⎯or even 30 universities⎯divest,” says Sophie Lasoff, an organizer of New York University’s divestment campaign. “But I think it is an educational campaign. It’s creating a movement and it’s creating awareness.”

Since the anti-apartheid movement of the 1980s, divestment and economic boycotts have become common tactics for student organizing, and they are now regularly used in struggles against an array of targets. At schools throughout the country, students are also working on campaigns to pressure their universities to divest from big banks such as JPMorgan Chase, Wells Fargo, and

Bank of America, which profited from the 2008 housing crisis and are leaders in home foreclosures.

“Universities are big enough to matter and small enough to be moved,” says Angus Johnston, a historian at the City University of New York and the founder of the website studentactivism.net. For students, divestment campaigns also have the benefit of focusing action around a clear target: the trustees who govern universities.

Since unveiling this campaign, McKibben and 350.org have also faced criticism. In a Nov. 29, 2012 op-ed for the Huffington Post, author Christian Parenti argues that fossil fuel companies respond only to their bottom lines—and that they make money from selling oil, not stocks.

Parenti is also concerned that activists are echoing a neoliberal assumption that only market forces can effect change, by discounting the power of the state in curbing fossil fuel use. The Environmental Protection Agency, he notes, has laws on the books that would regulate fossil fuel companies if it would only enforce them.

“If you actually look at the details of previous struggles you will see that symbolic power [of divestment] has to eventually crystallize as government action,” Parenti tells In These Times. “Take tobacco. The moral spectacle of dumping tobacco stock was itself not economically painful. But once that moral power was crystallized as legal power in the form of anti-tobacco laws, then consumption of tobacco and tobacco profits began to decline.”

Johnston, however, argues that even without government action, a divestment campaign drawing attention to an industry’s misdeeds can eventually cut into its profits. “A campaign that’s begun on the level of symbolic politics may rise to the level of practical impact over time,” says Johnston. “Bad publicity can have a quite powerful effect on a company’s bottom line.”

McKibben stresses that the “Do the Math” campaign is one aspect of the larger climate justice movement. “It’s all part of one big fight. … We’ve already done the biggest civil disobedience in 30 years,” says McKibben, referring to the September 2011 sit-in at the White House in which 1,252 people were arrested in protest of the Keystone XL pipeline.

On February 17, climate activists returned to Washington, D.C. for another mass action calling on President Obama to reject the pipeline. 350.org was joined by the Sierra Club, which participated in an act of civil disobedience for the first time in its 120-year existence.