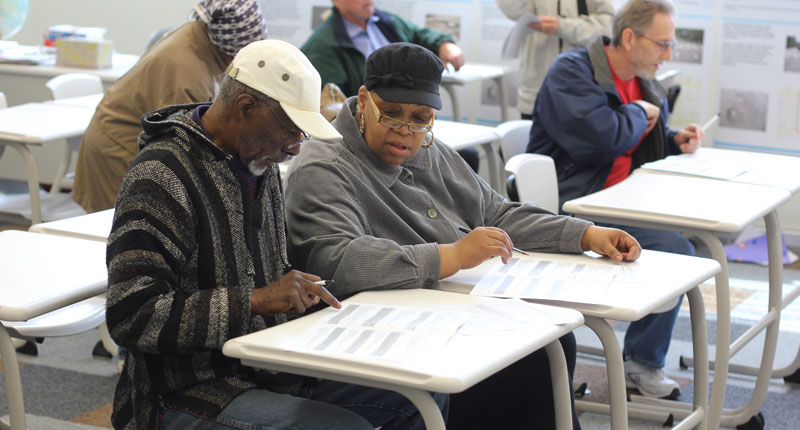 Louis H. Rollins Sr. and Vaneeta Rollins vote on how to spend the 5th Ward 'menu money' on May 5. (Photo by Spencer Bibbs)

Participatory budgeting is on the menu in Chicago.

Some in the 5th Ward, having had a taste of direct democracy, want to exercise their new power more broadly, and are eyeing both the public schools budget and the entire city budget.

This story is the fourth installment of “Direct Democracy in Chicago’s 5th Ward,” a five-part series supported by a grant from the Local Reporting Initiative of the Chicago Community Trust. Read the first three stories in the series here, here and here.

Chicago Mayor Rahm Emanuel has squelched any attempt by the City Council to check his power, successfully killing proposals for independent oversight of the city budget and of a new public-private investment scheme.

So it’s a surprise to some observers of city politics that Chicago was the first place in the United States to implement participatory budgeting, a version of direct democracy developed in Brazil that gives residents control over how a portion of the city budget is spent. Alderman Joe Moore started using participatory budgeting in 2009 in his 49th Ward, letting residents decide how to spend his “menu money,” the $1.3 million each Chicago alderman is allocated for small infrastructure projects.

This year, three aldermen joined Moore in bringing participatory budgeting—or PB as it is commonly known—to their wards. Among them was 5th Ward Alderman Leslie Hairston, who represents parts of the historic South Side neighborhoods of South Shore and Hyde Park, along with the historically black, but now gentrifying Woodlawn, and the high-crime Greater Grand Crossing. To follow the process in the 5th Ward is to get an education in how competing needs and interests play out when an entire constituency is allowed to plan the budget.

Hyde Park, home to the University of Chicago, is a wealthy and well-connected area of the city. South Shore, though it includes many blocks and houses that rival the grandest in Chicago, usually makes the news when there’s a shooting on one of several dangerous streets. As such, when ward residents began brainstorming participatory budgeting projects in October 2012, the ideas ranged from the recreational, like an ice-skating rink or a dance center, to the practical, like more streetlights and security cameras.

After months of work by volunteer community representatives, 5th Ward staff, the national nonprofit Participatory Budgeting Project and the University of Illinois’ Great Cities Institute, those 170 initial ideas became 13 well-defined projects. On May 4, ward residents aged 16 and older were afforded the chance to vote for their favorite six proposals. The projects will be implemented in order of popularity until the $1.3 million runs out. And because of the low cost of most projects, as many as 11 proposals may make the cut.

Elliott El-Amin, a South Shore resident, says he wasn’t sure what to expect at first. “Like a lot of people, it took me a while to grasp the concept, because no one’s come to you to ask you to have control of money like that.” But once he saw that participatory budgeting was really going to happen, he became highly involved in the creation of what would turn out to be the most popular project—a community garden on 71st Street, a main thoroughfare in South Shore. Other popular projects included new streetlights, repairs to lighting at underpasses and an elaborate community mural.

Though some may think the beautification and public safety projects have little to do with one another, proponents of the garden and the mural stressed the positive effect each could have on the community. Robert Van Puyenbroeck, who lives in the Jackson Park Highlands, a beautiful area of South Shore, says, “I wouldn’t necessarily worry about my area, as opposed to other neighborhoods that need more help.” He voted for the garden because he thinks it may help with some of the “riff-raff” that hangs out near the proposed site, currently a vacant lot.

El-Amin, who lives a few blocks from where the garden will be, agrees. “We’ve got a problem now on 71st that we have to deal with—a criminal element there—and a lot of these projects, the streetscapes and lighting, can really change that,” he says.

Latisha Thomas, who worked on the mural proposal, sees a connection between the blight of the underpass that the mural will beautify and the lifestyle that some youth choose. “Our children are embracing negativity because they see this negative energy whenever they walk by—it’s an eyesore and an example of abandonment,” says Thomas. The mural, which will include colorful scenes of life in Woodlawn, will let residents “know there are positive things going on in their community.” And the community will be involved in its creation, with residents helping clean the underpass and paint the mural.

As of yet, those who live in the most dangerous areas of South Shore may not know much about participatory budgeting. A dozen residents interviewed on the street in the week before the final vote hadn’t heard of the process. One elderly woman said she wasn’t going to get involved because, “I don’t know how much longer I’ll be staying in this neighborhood—they’ve gotten too dangerous. It’s just too much.”

Historically, participatory budgeting has been used to uplift the poorest residents of an area, and to empower those who have long been disenfranchised by the existing political processes. In the late 1980s, the Workers’ Party invented PB in Porto Alegre, Brazil, as a radically democratic response to the military dictatorship that had denied working- and lower-class citizens even the most basic amenities for decades. After taking control of much of the city budget, residents built affordable housing, paved roads, erected public schools and delivered clean drinking water to what had been the city’s most neglected people.

In 2012, Vallejo, California—a Bay Area-city of 116,000 people—started the first citywide participatory budgeting program in the United States, using $3.2 million in revenue from a new 1 percent sales tax. In May, about 4,000 residents voted for projects that included street repairs, 30 college scholarships for students in need, improvements to parks, and additions to school libraries and science labs.

Most everyone involved in participatory budgeting in Chicago wants to see the program expand. Next year, several more aldermen are expected to introduce the process in their wards. But 5th Ward participants, who have now had a taste of direct democracy, want to exercise their new power more broadly. Some are eyeing the public schools budget or the entire city budget. El-Amin thinks a good place to start would be the $50 million in private funds Mayor Emanuel is trying to raise to help combat youth violence.

“At the press conference he had announcing this, the mayor only mentioned youth basketball leagues,” El-Amin says. “If that’s all you can come up with, with $50 million dollars, I think somebody’s got a lot more money than they’ve got ideas.”

The ability to truly help those in need, by building affordable housing or increasing spending in public schools, is far outside the reach of ward menu money. That may be why Chicago’s programs have not caught fire as they have in other parts of the world. In the 49th Ward, more than 1,600 residents voted in PB’s first year, but that was only 2.6 percent of the population. And in the 5th Ward, only 103 residents voted, roughly 0.2 percent of the population—a disappointing turnout that can likely be attributed to a combination of factors: lack of outreach, the newness of the program and the inadequacy of the menu money to fix the ward’s most demanding problems—housing foreclosures, school closures and gun violence.

Nonetheless, 5th Ward residents who participated say they are proud of what they accomplished, and some are already strategizing how to engage more people next year. Meanwhile, after meeting with Alderman Moore in early 2010, four New York City council members began participatory budgeting programs in their districts, and four more joined them last year.

William Yelder, an activist from Buffalo, N.Y., visited the 5th Ward’s voting site on May 4, and, struck by the excitement he saw, is inspired to bring participatory budgeting back to Buffalo. “It was an epiphany,” he says. “I thought, ‘This is what we need. We can get this everywhere. This can work.’ ” It’s a process, he says, that can “convince people to believe how powerful they are.”