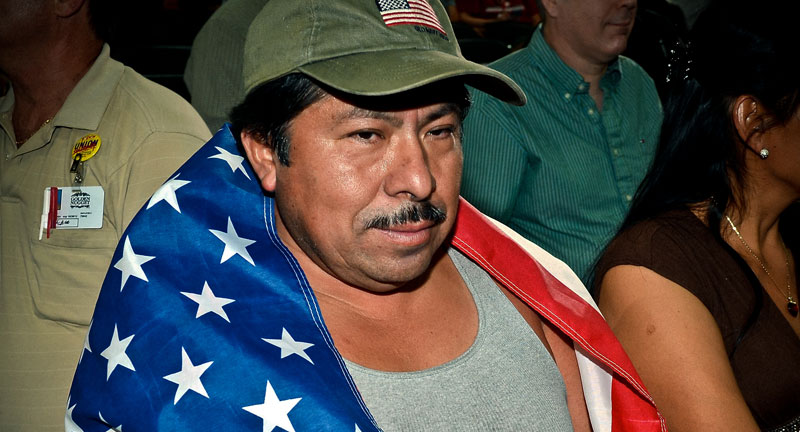 The Devil’s in the Details

If the Senate’s bill is so good, why are immigrant rights groups so unhappy?

'The bill represents the outcome of many compromises made by progressives in order to keep Republicans on board.'

After months of backroom negotiations and public debates, on June 27 the Senate passed the most extensive overhaul of U.S. immigration policy in decades. The Border Security, Economic Opportunity and Immigration Modernization Act (S. 744) passed with the support of all Senate Democrats and 14 Republicans. President Obama said of the bill, “Nobody got everything they wanted. Not Democrats. Not Republicans. Not me. But the Senate bill is consistent with the key principles for commonsense reform that I—and many others—have repeatedly laid out.” The legislation then headed to the Republican-controlled House of Representatives.

Labor unions and immigrant rights groups have been strong proponents of reform, but they’ve expressed mixed feelings about the legislation. While the bill offers a much sought path to citizenship for many of the 11 million undocumented, provisions that provoke concern include the length of the path (13 years on average), the requirement that those on it be continuously employed, the terms of a new guest-worker program and the increased militarization of the U.S.-Mexico border. The AFL-CIO, which worked closely with Democrats to advance the legislation, offered only a tepid endorsement of the final version.

In These Times discussed the bill with Ana Avendaño, the AFL-CIO’s director of immigration and community action; Rosalinda Guillen, a farm worker advocate and member of the Dignity Campaign; and Immanuel Ness, a political science professor at CUNY.

What new labor protections does the version of the bill passed by the Senate offer immigrant workers?

ANA:  S. 744 has a number of labor protections. Threats related to workers’ immigration status have become the best way for employers to defeat workers’ attempts to organize for fair pay and dignity on the job, so the path to citizenship is the biggest and most important worker protection. There are new protections for temporary workers who expose violations of law. The bill also regulates labor recruiters for the first time, which is important.

ROSALINDA: These are good protections. But the protections that exist now don’t make much difference because there’s no enforcement. Exploitation is going to continue, especially given what’s required of workers to maintain a good status while they’re waiting to apply for legal permanent residency.

The “continuous employment” provision of the bill requires immigrants on the path to citizenship to not be unemployed for more than 60 consecutive days. What would this mean for workers?

ROSALINDA: This is a question that workers have been asking us because this provision is devastating to low-income workers. Many undocumented people work two or three low-wage jobs, and they have to hustle just to keep those. So when they look at the reality of trying to stay employed, coupled with the uncertainty of what this provision means—60 total days or 60 continuous days—and the requirement that workers earn a certain wage per year, they know these legalization provisions are unlikely to help them. In fact, workers say to us, “They want us out, and this is another way to get us out.”

They’re disappointed with the compromises that have been made—the legalization provisions, the militarization of the border—and they ask, “Who negotiated this for us? Who is doing this and why?”

IMMANUEL:  The legislation is largely an extension of corporate and business demands. Republicans—and Democrats who support the primacy of capital—favor this legislation as it forces workers to find work at minimum wage if they seek citizenship. Many cohesive immigrant ethnic families and communities will be thrown into disarray as workers are forced to travel long distances to find employment. By forcing more workers into the labor market, the reserve army of low-wage workers will grow, and wage standards will diminish and labor unions’ capacity to organize will decline. One would only hope that if passed, this legislation is not enforced by local and state authorities.

So how did we end up with this bill?

ANA: The bill represents the outcome of many compromises made by progressives in order to keep Republicans on board. Things have changed a lot since the mass immigrants rights marches of 2006. We have a community organizer as a president, and progressive forces control the Beltway. But it’s still a toxic environment for immigrants and immigrant workers. There was a real desire to pass a bill, and Democratic senators identified the baseline requirements it would take for Republicans to get on board and worked off of that. Whether that was right or wrong, that was the reality.

ROSALINDA: Early on in the process, members of the Dignity Campaign for Real Immigration Reform came out and publicly opposed the bill in the hopes of moving progressives towards a discussion where some of these compromises could be reversed. When we spoke to our base about what they thought would be included in truly comprehensive reform, something that came up again and again is the trade agreements that force them to migrate. This has been missing completely from the discussion.

Immanuel, you’ve been critical of the AFL-CIO’s compromise with the Chamber of Commerce on the guest-worker provisions of the bill. Why?

IMMANUEL: The guest-work program is an extension of the Chamber of Commerce’s efforts to replace low-wage workers—from agriculture to hospitality—with foreign-born guest workers who will not have equivalent rights and will be denied the right to become U.S. citizens. This bill appears to be written by the business lobby to expand the labor market for low-wage workers.

What would a genuinely pro-labor immigration platform look like, and why has this been so difficult to discuss in the context of “immigration reform”?

ANA: Immigration is not an easy question for many union members. But the labor movement’s position has evolved dramatically, and the key has been finding ways to talk about this issue as one of worker rights. When the AFL-CIO changed our policy formally in 2001, we called for amnesty because we realized that a two-tiered society is not sustainable, fair or just.

ROSALINDA: The majority of the undocumented workforce is not organized under collective bargaining agreements, and the labor movement recognizes that this is a weakness. The expansion of guest-worker programs in this bill will make labor organizing more difficult. But we can’t just look at getting immigrant workers into collective bargaining agreements. We need to model new ways of empowering people so that we can have better policy and prevent restrictive and harsh policy being passed in the Congress.

ANA: We don’t know what’s going to happen in the House. The question is how do we build up the power to actually impact the legislative process.

Organizing is what happens when people say “no.” We’ll need the progressive community to come together on this issue, and take the fight back to the streets. We’re getting ready to do that in Republican districts, to show the Republican Party that the face of America is changing, and that they’ll have to accept that.

ROSALINDA: I agree with those statements. But supporting this bill does not back them up. Opposing the bad parts of this bill—the criminalization of families, a long, harsh, provisionary status—is the way to take a stand.

IMMANUEL: A progressive plan should allow all immigrants the right to stay in the United States without monetary penalties, which will further drive low-wage workers underground. And crucially, immigrant workers should also have a right to stay home. That means progressives must demand trade policy that ends the dumping of agricultural products into Mexico and Central America. A short-term interim measure is granting citizenship for millions who have lived in the U.S. for decades and passage of the Dream Act, which is possible. Immigration reform is necessary, but not under the conditions passed by the Senate. Comprehensive immigration reform is preferable to immigration reform that penalizes migrant workers.