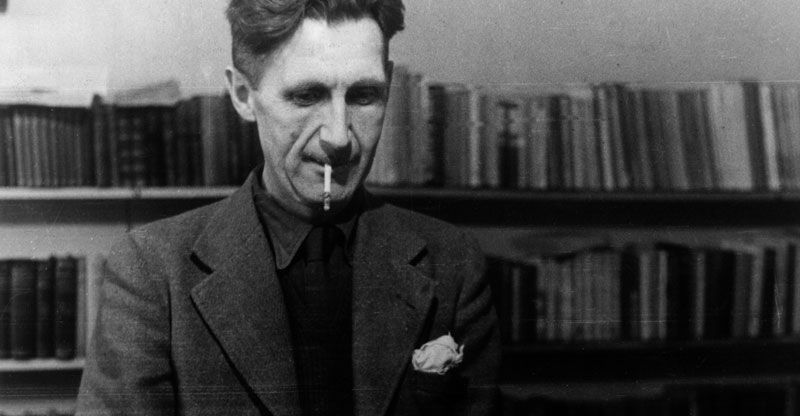 George Orwell at his typewriter. (Mondadori via Getty Images)

A new book of letters offers a glimpse at the man behind the reputation.

As Orwell himself noted, 'any life when viewed from the inside is simply a series of defeats.'

George Orwell was, famously, a man in dialogue with his time. From Down and Out in Paris and London to 1984, he showed the ways large, inhumane systems of power impinge on the lives of individual people. A devoted socialist, he was vocally hostile toward capitalism, Communism and Fascism, as well as British Imperialism. His political views were largely shaped by his personal experiences, from serving in the Imperial Police in Burma, to working as a dishwasher in France and picking hops in the English countryside, to fighting in the Spanish Civil War, where he was shot by a Fascist sniper and had to flee the Communist secret police. His work, in turn, provoked controversy from left and right alike, and earned him a reputation for contrarian integrity. This reputation had some ironic results: Some of his work was banned by the British government in India even while he was making propaganda broadcasts to the country, commenting on the war effort for the BBC.

George Orwell: A Life in Letters, out this month from Liveright, can be read as a record of the dialogue between Orwell and his era. The correspondence collected here spans forty years, beginning with a badly spelled letter home from boarding school and ending with a letter his wife, Sonia, wrote on his behalf because he “isn't strong enough to write himself.” It provides an intimate view of Orwell's life, though often the most revealing letters are not his but those of his friends, and especially those of his first wife, Eileen, whose correspondence shows her to be a gifted writer in her own right.

Unfortunately, those turning to A Life in Letters for commentary on Orwell's literary work will largely be disappointed. One can find, reading his correspondence, occasional insights into the origins of 1984 and the “moral” of Animal Farm (“that revolutions only effect a radical improvement when the masses are alert and know how to chuck out their leaders as soon as the latter have done their job”).  But what we see far more often are quarrels with publishers and worries about money.

On the other hand, those looking to understand the scope and nature of Orwell's political commitments will find some interesting facts to work with. Many of these letters deal with his excitement in seeing Animal Farm translated into Eastern Bloc languages, along with his refusal to profit from such editions. A couple of notes to the anarchist Sir Herbert Read concern preparations to secure a printing press with which to produce anti-war propaganda in the event of stringent censorship. Others touch on his critique of imperialism, his devotion to intellectual freedom, and his concern with the treatment of German POWs, among other things. One theme that comes across repeatedly is Orwell's insistence on fair dealing, even for his adversaries—whether pacifists like Alex Comfort or fascists like Sir Oswald Mosley.

Orwell the writer is present throughout the book as a kind of shadow figure. Orwell the man stands in the foreground. The most dramatic incidents in Orwell's life—those that form the subject of much of his professional writing—pass largely without comment in his letters. There are no notes here from his years in the Imperial Police in Burma, none from his time “down and out” in Paris, just one from his “adventure as an amateur tramp” in England, very few from Wigan, where he reported on the living conditions of the miners, and hardly any from Spain. There are, however, numerous letters from his days in a sanatorium, chronicling the progression of his tuberculosis and the numerous, fruitless attempts to treat it. These last are remarkably matter-of-fact, with a resigned—and even sometimes rather cheerful—tone. His own sufferings are little commented on, his chief frustrations being the illness's interference with his work and the distance it put between him and his son, Richard, who could not visit until the infection had cleared.

What this book offers is really a series of vignettes, primarily from Orwell's perspective, into the quiet, everyday aspects of his life. Such a view is, in one sense, harder to attain than a chronology of public actions and personal milestones, and is therefore that much more valuable. But it is hard to know exactly for whom this book is meant. Most of these letters will already be familiar to Orwell enthusiasts, while the presentation here does not include enough narrative context to orient the casual reader to the significance of much of the book's content. In either case, one would likely be better served by consulting the four-volume Collected Essays, Journalism, and Letters of George Orwell (Harcourt, Brace & World, 1968), which includes the most important of the letters, alongside his essays and newspaper commentary, excerpts from his diaries, and so on.

Still, with such a symbolic figure, it is worth the time to pause and consider the purely human aspects of his story—the unwritten books, the canceled travels, the botched romances, the illness, the money woes, the difficulty finding shoes that fit and, more sweetly, his affection for his little boy.

A Life in Letters lets us see Orwell's story, as it were, from the inside—and, as Orwell himself noted, “any life when viewed from the inside is simply a series of defeats.”

The sense of defeat may help us to see past his reputation.That that reputation was already taking hold during his life, and found proponents among people who knew him well, suggests that it was in some important ways deserved; but the image it creates is necessarily a simplification, and therefore a distortion.

When Orwell was working at the BBC, producing what was essentially propaganda, his supervisor issued a report (excerpted in this volume) stating:  “I have the highest opinion of his moral, as well as of his intellectual capacity. He is transparently honest, incapable of subterfuge, and in early days, [he] would have either been canonized—or burnt at the stake!” Orwell himself had a very different assessment. He wrote in his diary: “All propaganda is lies, even when one is telling the truth.” Besides which, it was Orwell who reminded us (in his essay on Gandhi) that “Saints should always be judged guilty until they are proved innocent…”

Two incidents in particular invite rebuke. In the first, Orwell made aggressive and unwanted sexual advances toward his friend Jacintha Buddicom, going so far as to hold her down and tear her dress. In the second, he passed a list of suspected Communists to a government agent. A Life in Letters handles each of these matters, I feel, too briefly, yet by printing letters from the other parties, it does add important context.

The latter case, which sounds so much like the “naming names” of the McCarthy period, turns out to be something pretty different. Orwell's friend Celia Kirwan was employed by the Information Research Department, which was looking for leftwing anti-Stalinists to help counter Soviet propaganda. She asked Orwell for an article, but he was too ill to oblige. He did, however, suggest some other writers who might be good for the job and, as a precaution, offered to “give you a list of journalists & writers who in my opinion are crypto-Communists, fellow-travelers or inclined that way & should not be trusted as propagandists.” Whether this was wise (or fair) could of course be debated, but it is clearly something different than testifying before HUAC.

In the former case, nothing can be said to excuse Orwell's conduct. But in a letter written to a friend decades later (and reprinted in this collection), Buddicom offered her assessment:  “He had ruined what had been such a close and fulfilling relationship since childhood. …  It took me literally years to realise that we are all imperfect creatures but that [he] was less imperfect than anyone else I ever met.”

That phrase—“less imperfect”—fits nicely with Orwell's own outlook, his rejection of utopias, his distaste for sainthood and hero-worship, his pessimism about all varieties of perfectionism, and also his insistence that we accept dilemmas on their own terms and be willing to choose between greater and lesser evils. It fits, too, with his self-deprecating manner, his humility with regard to his work and his gift for “facing unpleasant facts.” Taken together, these features make up an attitude that is both realistic and humane, strict in its adherence to the truth but for just that reason forgiving of human weakness. This attitude is present, of course, in individual letters. More interesting, the collection as a whole encourages us to take the same attitude toward Orwell.  Rather than hold him up as a symbol or a saint, it shows us something more—George Orwell as a human being, greater than his faults, smaller than his hopes.