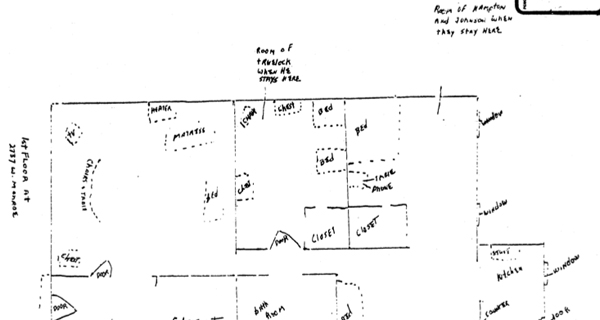 Included in the FBI's file on the Black Panther Party was a floor plan of Hampton's apartment specifically identifying the bed where he slept. (People's Law Office)

How the FBI Conspired to Destroy the Black Panther Party

The assassination of BPP leader Fred Hampton in 1969 was just the beginning.

The FBI had, in fact, played a central role in the assassinations, and Hanrahan’s initial lies were only the top layer of what proved to be a massive cover-up.

On Dec. 4, 1969, a select unit of 14 Chicago police officers, under the direction of Cook County State's Attorney Edward Hanrahan, executed a predawn raid on a West Side apartment that left Illinois Black Panther Party (BPP) leaders Fred Hampton and Mark Clark dead, several other young Panthers wounded and seven raid survivors arrested on bogus attempted murder charges. Though Hanrahan and his men claimed there had been a shootout that morning, physical evidence eventually proved that in reality, the Panthers had only fired a single shot in response to approximately 90 from the police.

In the wake of the raid, Illinois BPP Minister of Defense Bobby Rush stood on the steps of the bullet-riddled BPP apartment and declared that J. Edgar Hoover and the Federal Bureau of Investigation were responsible for the raid. At the time, Rush had no hard proof to back up his claims. Over the course of the next eight years, however, activists and lawyers, myself included, would eventually discover the truth: The FBI had, in fact, played a central role in the assassinations, and Hanrahan’s initial lies were only the top layer of what proved to be a massive cover-up.

The first evidence to support Rush’s allegation surfaced in March 1971, when a group of anonymous activists who called themselves the “Citizens’ Commission to Investigate the FBI” broke into a small FBI office in Media, Pa. to expropriate more than 1,000 documents. In doing so, the Commission exposed the FBI’s “COINTELPRO” program, a secret counterintelligence program created to, as the L.A. Times put it in 2006, “investigate and disrupt dissident political groups in the United States.“ According to the Commission’s purloined documents, Hoover had directed all of the Bureau’s offices to “expose, disrupt, misdirect, discredit and otherwise neutralize” African-American organizations and leaders, including the Southern Christian Leadership Conference, the Student Nonviolent Coordinating Committee, the Nation of Islam, Martin Luther King, Stokely Carmichael and H. Rap Brown.

Two years later, it was publicly revealed in an unrelated case that Chicago Black Panther Party Chief of Security William O'Neal was a paid informant for the FBI. At the time, I was a young lawyer working with my colleagues at the People’s Law Office on a civil rights lawsuit we had filed on behalf of the Hampton and Clark families and the survivors of the December 4th raid. We quickly subpoenaed the Chicago FBI’s Black Panther Party files. In response, the FBI produced a small number of documents that included a detailed floor plan of the BPP apartment specifically identifying the bed where Hampton slept, which O’Neal had supplied to Hanrahan before the raid by way of his FBI control agent.

For the following two years, we focused on unearthing further details about the FBI's involvement in the conspiracy and sought the Chicago office's COINTELPRO file in order to establish a direct link between the FBI's program and the raid. When the government would not produce the file—and District Court Judge Joseph Sam Perry refused to compel them to do so—we turned to the Senate Select Committee to Study Governmental Operations for help.

A staff member of the Committee, which was created in the wake of the Watergate scandal to investigate rampant abuses by all United States intelligence agencies, including the FBI, informed us in late 1975 that there were several documents in the Chicago office definitively establishing the link we sought. Armed with this information, we were able to persuade Judge Perry, who had previously declared those documents irrelevant after privately reviewing them, into ordering the FBI to produce the file. And just as the Select Committee had promised, the documents revealed the FBI's efforts to foment violence against Fred Hampton and the Chicago Panthers. One document, dated Dec. 3, 1969, specifically classified the anticipated raid on the West Side apartment as part of the COINTELPRO program.

In January of 1976, our team embarked on what would turn out to be one of the longest civil trials in federal court history. Two months in, O'Neal's FBI control agent, Roy Mitchell, blundered on the witness stand and inadvertently indicated that the FBI had not actually produced all of the Chicago Black Panther files Judge Perry, likely not knowing what was about to happen, ordered that they do so. The next day, a shaken Justice Department supervisor wheeled into court shopping carts, on which were stacked almost 200 volumes of FBI files on the BPP.

The government spent the next two weeks producing several volumes of documents each day. The files contained directives to destroy the Panther's Breakfast for Children Program and disrupt the distribution of the BPP newspaper, extensive wiretap overhears and evidence that the charismatic Hampton had been specifically targeted for intensive surveillance and disruption.

The last volume produced by the government was O'Neal's control file. In it was yet another smoking gun: a memo from the Chicago office to FBI Headquarters requesting a $300 bonus to reward O'Neal for his information, which the memo asserted was of “tremendous value.” A return memo from Headquarters approved this request.

Despite the overwhelming evidence to the contrary, Judge Perry exonerated the FBI defendants and their lawyers of any wrongdoing in suppressing the documents and later dismissed the FBI defendants from the case. But in April 1979, the Seventh Circuit Court of Appeals overturned the trial judge, finding that the FBI and its government lawyers had obstructed justice by suppressing the BPP files. The Court of Appeals also concluded that there was substantial evidence to support the conclusion that the FBI defendants, in planning and executing the raid, had participated in a “conspiracy designed to subvert and eliminate the Black Panther Party and its members,” thereby suppressing a “vital radical-Black political organization.” The Court further found there to be convincing evidence that these defendants also participated in a separate post-raid conspiracy to “conceal the true character of [their] pre-raid and raid activities,” to “harass the survivors of the raid” and to “frustrate any [legal] redress the survivors might seek.”

The next year, this landmark decision withstood a  challenge in the U.S. Supreme Court. It stands today as judicial recognition of outrageous federal and local criminality and cover-up.

However, it is important not to relegate the Hampton assassination and subsequent conspiracy to the annals of history. We would do well, after all, to remember Director Hoover’s line from a 1964 COINTELPRO memorandum in which he claimed credit for “disrupting” and “neutralizing” the Communist Party:

Over the years, our approach to investigative problems in the intelligence field has given rise to a number of new programs, some of which have been most revolutionary, and it can be presumed that with a continued aggressive approach to these problems, new and productive ideas will be forthcoming.

In light of the current revelations concerning the systemic illegal activities of the National Security Agency and the FBI in the name of fighting terrorism, such “new and productive ideas” seem closer at hand than ever.

Flint Taylor is a founding partner of the People’s Law Office in Chicago. He is one of the lawyers for the families of slain Black Panther leaders Fred Hampton and Mark Clark, has represented many survivors of Chicago police torture over the past 30 years and is counsel in several illegal search and wrongful death cases brought against the Milwaukee Police Department.