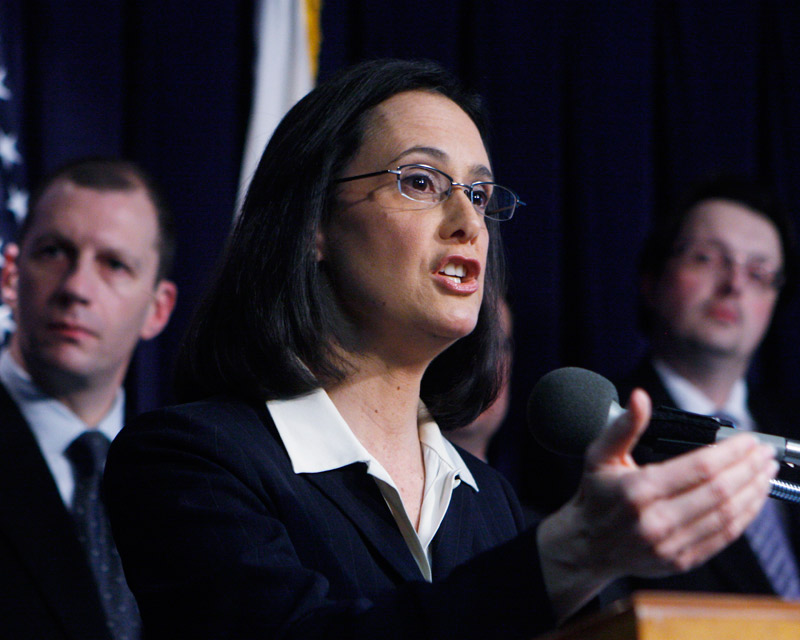 Illinois Attorney General Lisa Madigan went before the Illinois Supreme Court to try to stop pension payments to Jon Burge, who was fired from the city's police department in 1993. (Joshua Lott / Getty Images)

The former police commander has raked in thousands while in prison for lying about torturing detainees.

After Cook County Associate Judge Rita M. Novak dismissed the case, the Illinois Appellate Court overturned her decision. In doing so, the court noted that Burge was 'widely believed to have sanctioned and participated in physical abuse and torture of arrestees in order to obtain confessions.'

In June 2010, former Chicago Police Commander Jon Burge was sentenced to 4 1/2 years in prison for three torture-related felonies. But while Burge serves his time at the Federal Correctional Complex in Butner, N.C., he’s continued to collect his police pension—to the tune of some $36,000 a year. After his conviction, Illinois Attorney General Lisa Madigan, acting on behalf of the people of the state of Illinois, went to court in an attempt to stop that cash flow.

On Jan. 22, 2014, the Illinois Supreme Court heard arguments in Madigan’s case, People v. Burge. The question argued before the court was whether Madigan had the power to challenge the continuing lifetime payments to Burge.

City, county, state and federal taxpayers have already footed a bill amounting to more than $100 million over the course of two decades to investigate, prosecute and defend Burge and his cronies—and to compensate some of his victims. Still, Burge’s lawyers, likely funded by the Fraternal Order of Police based on past behavior, argued that the police pension board’s 2011 decision to continue to pay him could not be challenged in court. (The FOP did not return requests for comment.)

The board’s original 4-4 decision was based on the proposition that Burge’s conviction for lying under oath about whether he tortured detainees did not relate to, arise out of, or connect to his work as a police officer. Given the notorious circumstances of Burge’s sentencing, this resolution fostered widespread outrage, particularly in the African-American community. Madigan filed suit less than a month later to halt the payments.

After Cook County Associate Judge Rita M. Novak dismissed the case, the Illinois Appellate Court overturned her decision. In doing so, the court noted that Burge was “widely believed to have sanctioned and participated in physical abuse and torture of arrestees in order to obtain confessions.” Burge and the pension board then sought review of the decision in the Illinois Supreme Court. This high court, which only agrees to review about one in 20 cases, nonetheless granted Burge and the board the right to appeal.

During the arguments on January 22, the arcane-sounding legal issues discussed by justices and lawyers were framed by overarching concerns about the pension board’s 2011 decision. Those questions included whether the board’s evenly split decision, voted for only by the four current or former police officers present, had been a legally binding one. Another was whether it could be reasonably concluded that Burge’s eventual conviction—lying in federal court about whether he participated in the serial torture of arrestees during his tenure as a police officer—was, in fact, unrelated to his police work. And a third was whether the taxpayers can challenge such a decision via Madigan, given that neither Burge nor the board had an interest in appealing it.

But there are other older, equally troubling questions that surround the saga. Burge was first suspended in 1991 for allegedly torturing Andrew Wilson in 1982. The police board fired him for this offense in 1993, and his appeals were exhausted in 1995, making the decision final. Nonetheless, in 1997, Burge started to quietly collect his pension.

After the court-appointed special prosecutor’s 2006 report found that Burge had tortured Wilson “beyond a reasonable doubt,” a furor arose about the former commander living comfortably in Florida on his police pension. That report also led to a widely publicized City Council torture hearing in the summer of 2007, during which Alderman Ed Smith said Chicago could no longer allow Burge “to live off the fat of this city.” Meanwhile, the Chicago Sun-Times, in a banner editorial, urged Chicago to “PULL HIS PENSION.”

However, the Daley administration did nothing beyond funneling additional millions to defend Burge—and ultimately, Daley himself—in the civil cases brought by Burge’s exonerated victims in the following years.

The lingering doubts about Burge’s right to his pension were compounded in 2009, when former Chicago Police Superintendent LeRoy Martin testified at a deposition that, if Burge had been fired, he would have only been entitled to a lump sum payment of what he’d contributed to the superannuation fund over the course of his 21-year career, instead of lifetime checks supplemented by city funds. But contrary to the unambiguous decision of the police board and the reviewing courts, Martin then asserted that, in fact, the department had permitted Burge to retire, thereby protecting his right to collect his pension starting at age 50.

While this seems hard to fathom, Burge maintained in his 2010 trial that he’d retired in 1997 without mentioning his firing—testimony that went unchallenged by government prosecutors. And in 2011, the board opted to continue paying the pension Burge had begun to pocket more than ten years prior.

Attorney General Madigan’s current battle with Burge and his lawyers could go on for several years: If the Supreme Court deems that she has the legal right to challenge Burge’s payments, she’ll have to return to court again to do just that. To date, Mayor Emanuel’s lawyers have not joined forces with Madigan. And, like Daley before him, Emanuel has not spoken out on either side of the issue.

Burge, who rose in the ranks from patrolman to Commander in record time, has been said to have friends in high places. In an era where the Illinois Supreme Court and the legislature are potentially scaling back the hard-earned pensions of law-abiding public workers and their families, it will be telling to see, once again, just how high Burge’s clout reaches in this scandal-within-a-scandal.

Flint Taylor is a founding partner of the People’s Law Office in Chicago. He is one of the lawyers for the families of slain Black Panther leaders Fred Hampton and Mark Clark, has represented many survivors of Chicago police torture over the past 30 years and is counsel in several illegal search and wrongful death cases brought against the Milwaukee Police Department.