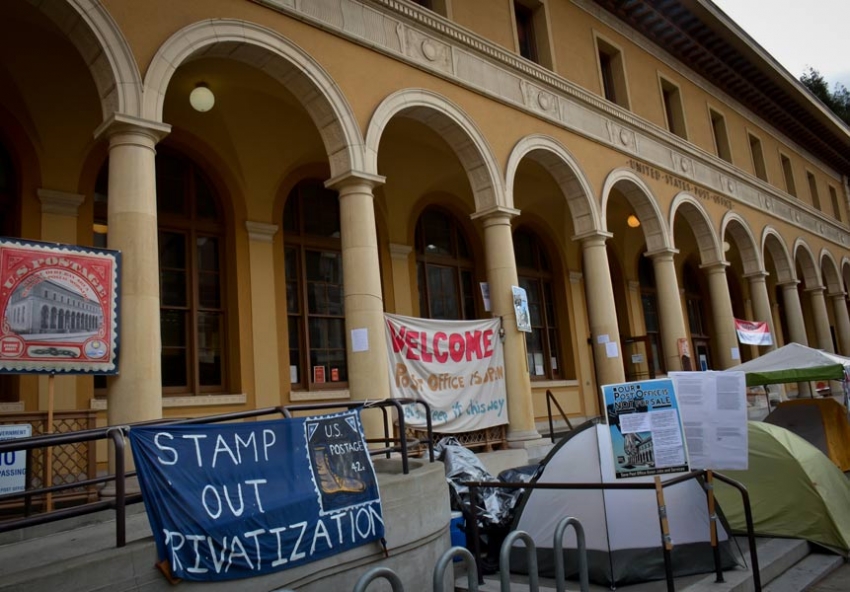 Activists and union workers fight to stop the U.S. Postal Service from shedding buildings and jobs.

A large-scale sell-off is no longer the primary concern; rather, it’s death by a thousand cuts of privatization.

The $1 trillion spending bill that the House of Representatives passed in January included a warning to the U.S. Postal Service: Stop selling off the nation’s priceless architectural assets.

Over the past several years, the USPS has reported huge net losses: $15.9 billion in 2012 and $5 billion in 2013. To avoid remaining in the red, the USPS has put up some 40 buildings for sale. But Congress instructed the postal service to “suspend the sale of any historic post office” until March, when the USPS Office of Inspector General will release results of an investigation into whether the sale of the buildings violates preservation laws. Many of the buildings are on the National Register of Historic Places.

The proposed sale of two buildings, in particular, has generated an uproar: Berkeley, California’s downtown post office and the Bronx General Post Office (built in 1914 and 1935, respectively). The New York Times describes the Bronx structure as “a centerpiece of life in the borough for more than 75 years.” Unloading the buildings is just the USPS’s latest attempt to relieve financial pressure. In 2011, it targeted 2,000 branches for closure, but abandoned the plan after aggressive pushback nationwide. Instead, it cut back operating hours in many branches.

One office slated for closure served the Hudson River Valley hometown of Steve Hutkins, a professor of literature at New York University. In response, Hutkins became a vocal post-office advocate and created the website SaveThePostOffice.com. Hutkins, who teaches a course about how literature creates a “sense of place,” says that while most local post offices may not be as historically significant as the Berkeley and Bronx branches, they’re just as critical to the fabric of their communities. “It’s the place where you see your neighbors and find out what’s going on,” he says.

Those community spaces—and the jobs they supply—remain under threat. A large-scale sell-off is no longer the primary concern, says Hutkins; rather, it’s death by a thousand cuts of privatization. “They find all kinds of ways to privatize it, without the big moment when they would privatize the whole thing,” he explains. “It’s been going on gradually.”

The USPS eliminated more than 37,000 jobs last year, and “postal jobs are going to keep disappearing—at a faster rate than in any other sector of the labor force,” warns retired postmaster Mark Jamison in an essay on Hutkins’ website. As a result, “by 2022 the number of clerks, mail processing workers, and letter carriers will decline” by 28 percent.

The downsizing and privatization have mostly happened under the radar, but they occasionally generate public flare-ups, as when the USPS began opening mini-post offices in dozens of Staples stores nationwide last fall. The outlets are staffed by non-unionized Staples employees, whose hourly wage is estimated at $8.25, rather than unionized USPS clerks, who make about $25 per hour.

In January, the American Postal Workers Union (APWU) mounted protests against the new USPS partnership with Staples, and it is mobilizing its 222,000 members for a broader, long-term fight.

“We’ve been sending delegations to Staples stores all over the country,” says APWU President Mark Dimondstein. “We certainly think that the workers are going to have to be more engaged and involved than they have in the past.”

While the USPS’s annual losses are the nominal reason for the downsizing and privatization, the push to privatize the postal service dates back nearly a half-century. Congress passed legislation in 1970 that transformed the post office into a “self-sustaining” institution, based on recommendations by a postal reform commission appointed by Lyndon Johnson three years earlier.

Since then the USPS has been subject to the profit and loss pressures of a private corporation—and also to the whims of Congress, which has forced it since 2006 to pre-fund retiree health benefits 75 years in advance. That obligation is responsible for a large part of the USPS’s annual deficits.

“No other U.S. agency or private business faces such a crushing financial burden,” writes Jamie Partridge in Labor Notes. “USPS has … overpaid tens of billions of dollars into two pension funds.”

“Right now everybody’s just hypnotized by the media’s repetition of how big the postal service’s deficits are,” Hutkins says. “[They believe] that no one uses the mail anymore. But this is a total myth. And now that the economy is getting better, some of the advertising volume is coming back.”

Indeed, the USPS saw its first revenue increase in years in 2013, to $66 billion from $65.2 billion in 2012. Had it not been for a $5.6 billion payment to the pension fund, the post office would have turned a profit last year. “It’s really a vital business,” says Hutkins. “That’s why people want a piece of it.”

Huge sums of money are also at stake in the USPS’s sell-off of buildings. About 1,100 post offices were constructed during the New Deal, and they are particularly valuable—and thus vulnerable. The Bronx building’s estimated value is nearly $15 million. While the fates of the Bronx and Berkeley post offices remain in limbo, activists in Berkeley are highly organized. They have camped out, staged frequent rallies and gotten virtually every elected local politician to speak out on behalf of keeping the building in public hands.

Privatization and downsizing have sparked similar local protests around the country. In October, seven self-designated “postal protectors” were arrested in downtown Portland, Ore., for trespassing as they protested the outsourcing of local postal jobs to private contractors. And in January, protestors rallied against the planned closure of a post office that was the site, in 1960, of Houston’s first civil-rights sit-in demonstration.

For its part, APWU is prepared to take the battle against privatization to the people that its members serve every day. That means “going out to the faith community and the senior organizations to talk about fighting to keep your local neighborhood post offices open,” Dimondstein says. “We can’t do it alone.”

Post offices are like national parks, Hutkins says. “Each of them plays an important role in its town, and each one has aesthetic beauty. [Selling them] hurts the economy of the town and the businesses around them.”

“It’s symbolic of what’s happening to the institution as a whole,” Hutkins continues. “The infrastructure belongs to the country and should be serving the interests of the country as a whole.”