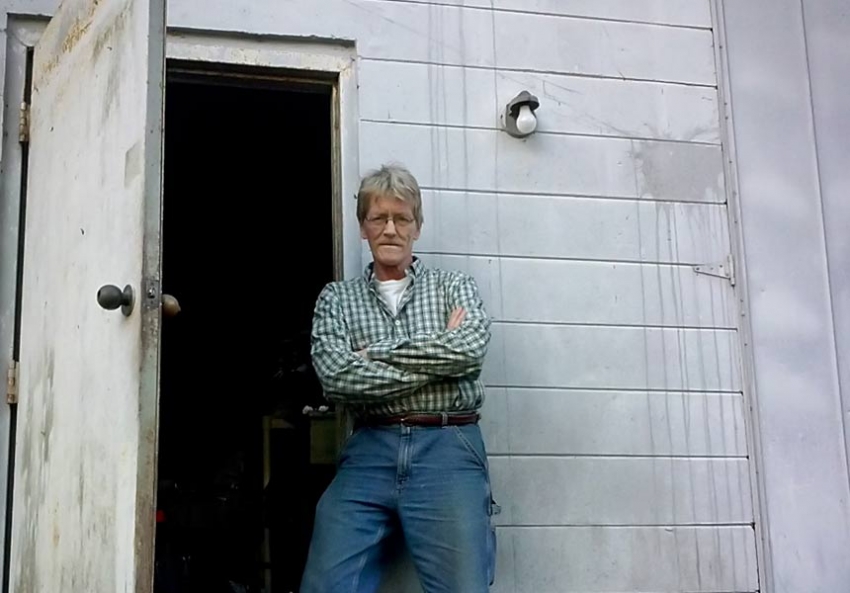 George Grasmann, 59, stands in front of the garage he has been living in for the past year. (Photo courtesy of George Grassman)

More than 5 million Americans have given up hope of a job. Who are they?

'I feel like the media and certain parts of the government are ignoring the problem of unemployed Americans, and we are being shoved into some sort of 'under community' with no way out.’

Back in 1990, George Grasmann earned more than $50,000 a year as a systems engineer. For a time, he rented a comfortable, spacious house outside Tampa, Fla. Today, he lives on less than $13,000 a year in part of a rented garage.

Grasmann’s tech career ended with a layoff in 2000, after which he shifted to taking any short-term job he could find. He lost his last job, with a pest control firm, in 2009. Since then, he says that he has sent out 1,500 applications for jobs with no success. Federal extension of unemployment assistance helped him survive and fueled his job search until he exhausted the full 99 weeks (an option no longer open to the unemployed, since Congressional Republicans repeatedly blocked renewal of extended benefits—although a new Senate extension deal awaits House approval).

Grasmann pawned personal belongings and ran through his retirement savings. He relied on food stamps until last year, when Republican-initiated changes made him ineligible. He was denied Social Security disability, but eventually the Department of Veterans Affairs (VA) ruled that his severe arthritic pain and other health problems justified disability payments, which constitute his only income.

Now, he fears he has overstayed his welcome at his garage home and may need to apply to the VA for emergency shelter. He says he is deeply discouraged and has stopped actively looking for employment.

But he has an idea for Congress: “Look at what FDR did with a jobs program. They found work that needed to be done and hired people to do it.”

Grasmann and millions of Americans like him have no job and want to work, but no longer count as “unemployed,” according to the Bureau of Labor Statistics, because they are not job-hunting.

The slow recovery from the Great Recession has led to a high number of Americans unemployed for more than six months. It has also contributed to an unusually sharp decline of the “labor force participation rate” (LFPR)— that is, the percentage of the civilian population working or looking for jobs. The figure has dropped from 67.3 percent in 2000 to about 63 percent, which translates into 5.85 million people who have vanished from the workforce. The Economic Policy Institute estimates that counting these “missing workers” would have put January’s official jobless rate at 10.0 percent, rather than the much-heralded 6.6 percent that marked the lowest rate since October 2008.

A look at the demographics of who has dropped out of the labor force, however, would support Atlanta’s case over Philadelphia’s. Workers older than 55 made up the only group whose rate of participation in the labor force actually increased during the Great Recession.

So who are these missing workers? Men dropped out of the labor force in greater numbers than women, and blacks in greater numbers than whites. Men disproportionately work in manufacturing, which began shedding jobs during the economic recovery of the 2000s and did so even more heavily in the Great Recession. Also, mainly male construction workers received a one-two punch when the housing bubble burst and then austerity-minded governments cut infrastructure spending.

Meanwhile, the severe recession compounds the plight of black men, who, through good times and bad, lag far behind white men in employment and labor force participation, according to Howard University economics professor and AFL-CIO chief economist William Spriggs. In addition, higher rates of injury drive black workers out of the workforce, Spriggs notes, and black workers are less likely to receive unemployment compensation, partly because employers are more likely to challenge their claims than those of white workers. Falling off the unemployment rolls means black workers are less likely to be counted by the BLS as labor force participants.

Age also plays a role. Between 2002 and 2012, young people aged 16 to 24 experienced the largest labor-force decline of any age group. While teens have an increasingly hard time getting a job, they’re not idly sitting at home watching TV: 16–to–24-year-olds are now more likely to be in school full time without a job. But these growing ranks of students in trade schools, community colleges and traditional four-year colleges are also increasingly unlikely to finish their post-secondary education, raising questions about whether school prepares them for work and citizenry, or simply occupies their time (and increases their debt).

But during that decade, workers aged 25 to 54—roughly two-thirds of the workforce—also stopped working or looking for work in droves. “Household care,” such as tending to an ailing family member or aged parent, is the main reason women give, while men most often cite disability, according to a paper by Atlanta Federal Reserve economist Julie Hotchkiss and colleagues.

People in this age group have also surged back to school. This is a socially respectable activity for the unemployed and may improve their mid-career job prospects.

But it doesn’t always work. After losing her administrative job when the market for carpets manufactured by her employer took a hit in 2009, Kathy Davis, 56, earned a paralegal certificate, volunteered at her local juvenile court to gain experience and would have probably gotten a job as a paralegal there, had the state of Georgia not cut spending. Now it has been three years since her last unemployment check, and food stamps are the only public assistance she receives. She has lost her house, her car and her retirement savings during her futile job search and, along with one son, is living with her daughter, the only employed family member. She has given up looking for a job and joined the ranks of the missing workers.

Davis blames the Tea Party and its corporate backers for destroying “everything I have worked for [over] the past 40 years. I feel like the media and certain parts of the government are ignoring the problem of unemployed Americans, and we are being shoved into some sort of ‘under community’ with no way out.”

Some baby boomers are retiring, but many, like Grasmann and Davis, aren’t doing so by choice. With job prospects slim and age discrimination rampant, they find themselves pushed into unwanted retirement or onto the growing lists for disability aid.

As the United States experiences another “jobless recovery,” millions of unemployed workers are simply giving up the hunt. From this, we can take several simple, important lessons. First, the deep, long recession and the limits imposed on government spending on aid to the long-term unemployed and job creation are the main causes of the decline of labor force participation, even if retirement of baby boomers also has some effect. Second, the striking decline in labor market participation makes official unemployment statistics less reliable as a guide to policymaking. We should be skeptical of the rightwing argument that the decline in unemployment stats erases the need for more government stimulus.

Indeed, the decline of labor market participation bolsters the case for a large-scale job-creation plan from federal, state and local governments, as well as the Federal Reserve. This could benefit both the jobless and jobholders. Without millions of desperate job seekers—and millions more “missing workers” in reserve—the balance of power would tip toward workers. The lowest-paid could bargain to earn more, thus reducing inequality, as economists Dean Baker and Jared Bernstein argue in their new book, Getting Back To Full Employment.

Perhaps most importantly, a stimulus would help people like Grasmann and Davis come in from the cold. “It is hard to avoid feeling like a used-up relic with not enough sense to just go away,” Grasmann writes in an e-mail. “I counter it with the idea that I was put here for a reason. For all I know my purpose is being fulfilled by telling this story to anyone who will listen.”