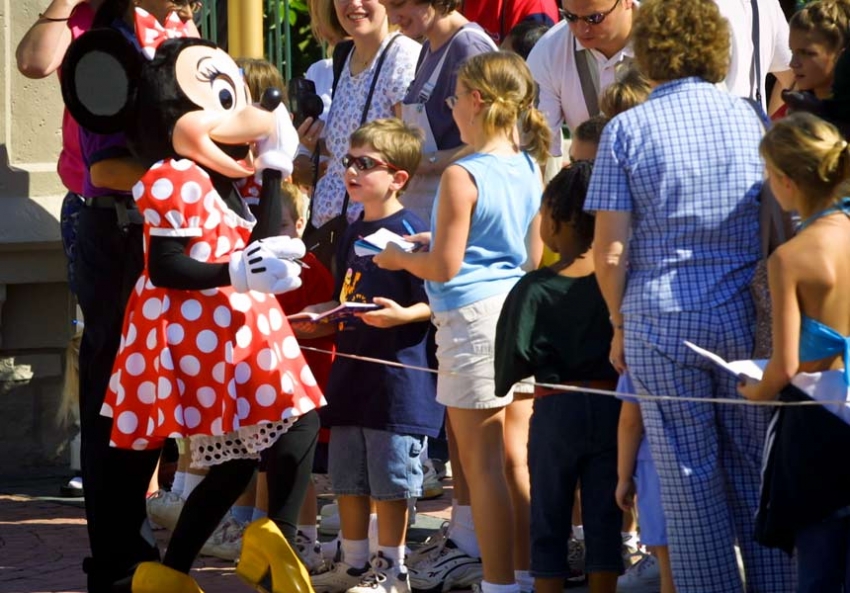 Why Paid Sick Days Are a No-Brainer

They keep you–and everyone else–healthy.

The choice between losing a job and caring for yourself, your family and public health is not one that people should have to make. And, in most countries, they don’t.

If you go to Disneyland, you might want to stop Mickey and Minnie from hugging your kid. The Walt Disney Company, like many businesses, opposes paid sick leave. The result, nationwide, is that millions of people show up for work every day sick as a dog (Pluto?), because staying home means losing essential pay or even their jobs. One sick person can infect hundreds, even thousands, with airor food-borne infectious diseases such as flu, colds, Hepatitis A and gastrointestinal illnesses, such as norovirus.

The lack of paid sick days hurts families. A kid comes home with a sore throat, and soon everyone in the house is in bed. Or should be. But unable to take a paid day off, parents send germ-laden children to school—where they extend the chain of infection.

According to the Centers for Disease Control and Prevention (CDC), the poor and poorly educated—already more vulnerable to some diseases—are most likely to hold jobs without paid sick days. An NIH study found, “Lack of paid sick leave appears to be a potential barrier to obtaining preventive medical care.” No paid sick leave is also linked to less screening for cancer, diabetes and other diseases that, when caught early, may have better outcomes, according to the CDC, which grants its employees 13 annual paid sick days.

The choice between losing a job and caring for yourself, your family and public health is not one that people should have to make. And, in most countries, they don’t. At least 145 nations mandate paid sick days for short- or long-term illnesses; 127 provide a week or more annually. But in America, 40 percent of private-sector workers and 80 percent of the lowest-paid workers have no paid sick days. That category includes workers in food, hospitality, healthcare, childcare and nursing homes—the very people in closest contact with the public, and with especially susceptible populations.

Every few months, we hear of another cruise ship that returns to dock because thousands of passengers, confined in a closed environment, have infected each other and crewmembers with norovirus, which causes violent diarrhea and vomiting. Well, those of us in contact with schools, workplaces, public transportation, nursing care and restaurants are on the equivalent of our own personal infection cruise—without the luxurious amenities.

Six U.S. cities and Connecticut recently voted to ensure paid sick leave, with other fights underway. This growing movement is opposed by corporations such as Disney and by large financial interests connected with the American Legislative Exchange Council (ALEC). Largely funded by corporations, trade groups and right-wing foundations—including those linked to the notorious Koch brothers— ALEC creates “model” legislation that is introduced, often verbatim, by state legislators around the country. In fact, ALEC’s fingerprints are all over preemptive bills passed in 10 state legislatures that bar cities and counties from enacting their own paid-leave standards.

The debate balances on the fulcrum of economics. Employers argue that paid sick leave cuts into profitability. Proponents, backed by numerous studies, counter that the effect on profits is small, non-existent or even positive. Indeed, “presenteeism” (sick workers showing up) costs employers $180 billion annually in lost productivity. During the 2009 H1N1 flu pandemic more than 8 million sick workers reported for work between September and November, according to the Institute for Women’s Policy Research, and may have infected 7 million coworkers.

Food-borne illness costs chain restaurants millions and ravage public relations. In 2008, after the health department traced more than 500 cases of norovirus to one worker at a Chipotle in Kent, Ohio, the chain gained notoriety for serving its customers a complimentary side order of diarrhea. Chipotle did not respond to inquiries about its sick-leave policy, but workers at three Chipotle locations in Manhattan told In These Times they receive no paid sick leave.

Arguing that paid sick leave is bad for profits is like asserting that bathroom breaks, minimum wages, safety standards and a 40-hour week hurt profits. Or that abolishing child labor and slavery cuts into revenue. So what? Even if paid sick leave did reduce profits, sometimes the bottom line is that the bottom line is not the point. There are greater goods, including public health.