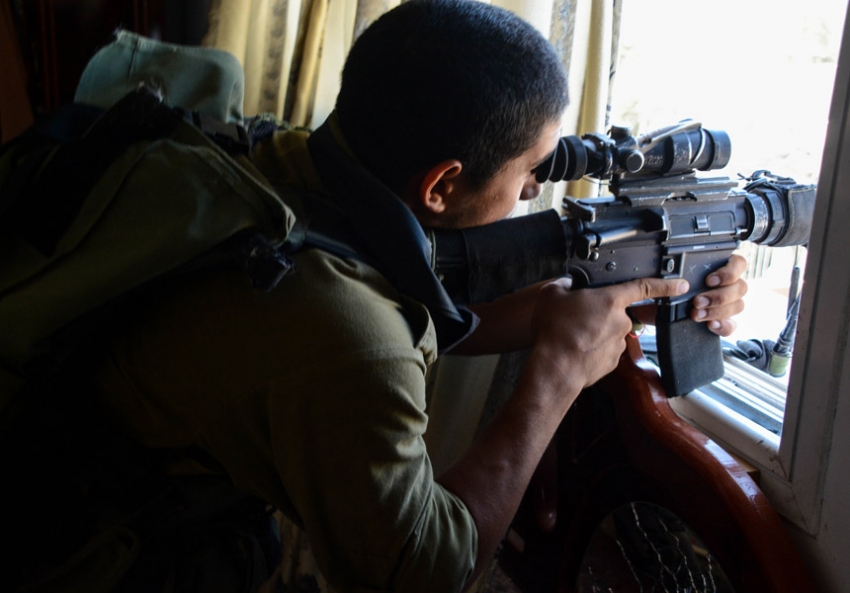 For Gaza, ‘The Norm’ Is Devastating

With its latest offensive, Israel’s objective is simple: to return to the status quo.

'We have no dignity, no pride; we are just soft targets, and we are very cheap. Either this situation really improves or it is better to just die.'

Amid all the horrors unfolding in the latest Israeli offensive in Gaza, Israel's goal is simple: quiet-for-quiet, a return to the norm.

For the West Bank, the norm is that Israel continues its illegal construction of settlements and infrastructure so that it can integrate into Israel whatever might be of value, meanwhile consigning Palestinians to unviable cantons and subjecting them to repression and violence.

For Gaza, the norm is a miserable existence under a cruel and destructive siege that Israel administers to permit bare survival but nothing more.

The latest Israeli rampage was set off by the brutal murder of three Israeli boys from a settler community in the occupied West Bank. A month before, two Palestinian boys were shot dead in the West Bank city of Ramallah. That elicited little attention, which is understandable, since it is routine.

“The institutionalized disregard for Palestinian life in the West helps explain not only why Palestinians resort to violence,” Middle East analyst Mouin Rabbani reports, “but also Israel's latest assault on the Gaza Strip.”

In an interview, human rights lawyer Raji Sourani, who has remained in Gaza through years of Israeli brutality and terror, said, “The most common sentence I heard when people began to talk about cease-fire: Everybody says it's better for all of us to die and not go back to the situation we used to have before this war. We don't want that again. We have no dignity, no pride; we are just soft targets, and we are very cheap. Either this situation really improves or it is better to just die. I am talking about intellectuals, academics, ordinary people: Everybody is saying that.”

In January 2006, Palestinians committed a major crime: They voted the wrong way in a carefully monitored free election, handing control of Parliament to Hamas.

The media constantly intone that Hamas is dedicated to the destruction of Israel. In reality, Hamas leaders have repeatedly made it clear that Hamas would accept a two-state settlement in accord with the international consensus that has been blocked by the U.S. and Israel for 40 years.

In contrast, Israel is dedicated to the destruction of Palestine, apart from some occasional meaningless words, and is implementing that commitment.

The crime of the Palestinians in January 2006 was punished at once. The U.S. and Israel, with Europe shamefully trailing behind, imposed harsh sanctions on the errant population and Israel stepped up its violence.

The U.S. and Israel quickly initiated plans for a military coup to overthrow the elected government. When Hamas had the effrontery to foil the plans, the Israeli assaults and the siege became far more severe.

There should be no need to review again the dismal record since. The relentless siege and savage attacks are punctuated by episodes of “mowing the lawn,” to borrow Israel's cheery expression for its periodic exercises in shooting fish in a pond as part of what it calls a “war of defense.”

Once the lawn is mowed and the desperate population seeks to rebuild somehow from the devastation and the murders, there is a cease-fire agreement. The most recent cease-fire was established after Israel's October 2012 assault, called Operation Pillar of Defense.

Though Israel maintained its siege, Hamas observed the cease-fire, as Israel concedes. Matters changed in April of this year when Fatah and Hamas forged a unity agreement that established a new government of technocrats unaffiliated with either party.

Israel was naturally furious, all the more so when even the Obama administration joined the West in signaling approval. The unity agreement not only undercuts Israel's claim that it cannot negotiate with a divided Palestine but also threatens the long-term goal of dividing Gaza from the West Bank and pursuing its destructive policies in both regions.

Something had to be done, and an occasion arose on June 12, when the three Israeli boys were murdered in the West Bank. Early on, the Netanyahu government knew that they were dead, but pretended otherwise, which provided the opportunity to launch a rampage in the West Bank, targeting Hamas.

Prime Minister Benjamin Netanyahu claimed to have certain knowledge that Hamas was responsible. That too was a lie.

One of Israel's leading authorities on Hamas, Shlomi Eldar, reported almost at once that the killers very likely came from a dissident clan in Hebron that has long been a thorn in the side of Hamas. Eldar added that “I'm sure they didn't get any green light from the leadership of Hamas, they just thought it was the right time to act.”

The 18-day rampage after the kidnapping, however, succeeded in undermining the feared unity government, and sharply increasing Israeli repression. Israel also conducted dozens of attacks in Gaza, killing five Hamas members on July 7.

Hamas finally reacted with its first rockets in 19 months, providing Israel with the pretext for Operation Protective Edge on July 8.

By July 31, around 1,400 Palestinians had been killed, mostly civilians, including hundreds of women and children. And three Israeli civilians. Large areas of Gaza had been turned into rubble. Four hospitals had been attacked, each another war crime.

Israeli officials laud the humanity of what it calls “the most moral army in the world,” which informs residents that their homes will be bombed. The practice is “sadism, sanctimoniously disguising itself as mercy,” in the words of Israeli journalist Amira Hass: “A recorded message demanding hundreds of thousands of people leave their already targeted homes, for another place, equally dangerous, 10 kilometers away.”

In fact, there is no place in the prison of Gaza safe from Israeli sadism, which may even exceed the terrible crimes of Operation Cast Lead in 2008 to 2009.

The hideous revelations elicited the usual reaction from the most moral president in the world, Barack Obama: great sympathy for Israelis, bitter condemnation of Hamas and calls for moderation on both sides.

When the current attacks are called off, Israel hopes to be free to pursue its criminal policies in the occupied territories without interference, and with the U.S. support it has enjoyed in the past.

Gazans will be free to return to the norm in their Israeli-run prison, while in the West Bank, Palestinians can watch in peace as Israel dismantles what remains of their possessions.

That is the likely outcome if the U.S. maintains its decisive and virtually unilateral support for Israeli crimes and its rejection of the long-standing international consensus on diplomatic settlement. But the future will be quite different if the U.S. withdraws that support.

In that case it would be possible to move toward the “enduring solution” in Gaza that U.S. Secretary of State John Kerry called for, eliciting hysterical condemnation in Israel because the phrase could be interpreted as calling for an end to Israel's siege and regular attacks. And—horror of horrors—the phrase might even be interpreted as calling for implementation of international law in the rest of the occupied territories.

Forty years ago Israel made the fateful decision to choose expansion over security, rejecting a full peace treaty offered by Egypt in return for evacuation from the occupied Egyptian Sinai, where Israel was initiating extensive settlement and development projects. Israel has adhered to that policy ever since.

If the U.S. decided to join the world, the impact would be great. Over and over, Israel has abandoned cherished plans when Washington has so demanded. Such are the relations of power between them.

Furthermore, Israel by now has little recourse, after having adopted policies that turned it from a country that was greatly admired to one that is feared and despised, policies it is pursuing with blind determination today in its march toward moral deterioration and possible ultimate destruction.

Could U.S. policy change? It's not impossible. Public opinion has shifted considerably in recent years, particularly among the young, and it cannot be completely ignored.

For some years there has been a good basis for public demands that Washington observe its own laws and cut off military aid to Israel. U.S. law requires that “no security assistance may be provided to any country the government of which engages in a consistent pattern of gross violations of internationally recognized human rights.”

Israel most certainly is guilty of this consistent pattern, and has been for many years.

Sen. Patrick Leahy of Vermont, author of this provision of the law, has brought up its potential applicability to Israel in specific cases, and with a well-conducted educational, organizational and activist effort such initiatives could be pursued successively.

That could have a very significant impact in itself, while also providing a springboard for further actions to compel Washington to become part of “the international community” and to observe international law and norms.

Nothing could be more significant for the tragic Palestinian victims of many years of violence and repression.