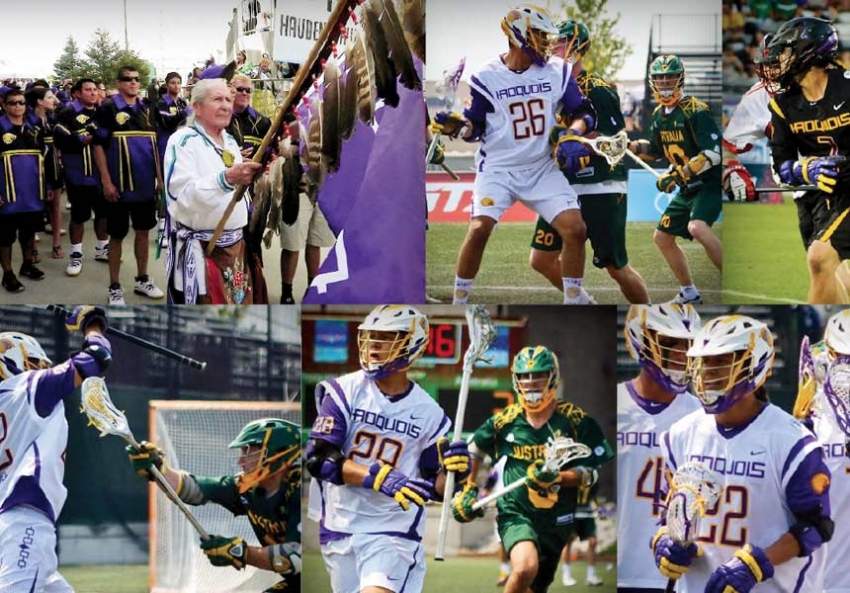 At the 2014 World Lacrosse Championship in Denver, Colorado, the Iroquois Nationals won their first medal in 30 years. (Courtesy of Ken Frost)

The Iroquois Nationals at the World Lacrosse Championships

The Iroquois lacrosse team plays to win, while their nation fights to have its sovereignty recognized.

The history of lacrosse is also the history of attempts by the Iroquois Nation—the longest-standing democracy in North America—to gain recognition under international law.

Oren Lyons has never given up faith in the Creator, his people or the game. The 84-year-old, an Onondaga statesman, is a 47-year member of the Iroquois Council of Chiefs. He is also a (still active) lacrosse player of world renown. I met him in July at the World Lacrosse Championships in Denver with the Iroquois Nationals team, a team he founded in 1983.

My friends were puzzled as to why I drove, with two 14-year-old boys, the 1,200 miles from the White Earth Indian Reservation in Minnesota to attend the games. But for me and other Native people, lacrosse is not only a game. It is an epic journey through centuries.

According to my people, the Ojibwe, the first game of lacrosse was played between the mammals and the birds. The bat, that creature which spans two worlds, won that game for the mammals. So today, birds fly south in the winter while the mammals stay put. Later, the Creator gifted the sport to the two-legged. Since then, it has been “the Creator’s game.”

“Lacrosse was traditionally used as a means of healing between parties when hurtful conflicts were imminent,” says Faith Spotted Eagle of the Yankton Indian Reservation in South Dakota. “History tells of a Yankton Chief, Waanatan, who oversaw a game that lasted several days, eventually leading to the settling of a conflict between camps. Many of our communities plagued by violence would benefit from this ancient way of resolving conflicts and pursuing healing.”

Sid Jamieson, a Mohawk (of the Iroquois Nation), is a former Bucknell University lacrosse coach. “In the sport’s earliest days, players would only step on the field if the clan mothers deemed they were pure in spirit enough to earn the honor,” says Sid. “The game was played ferociously. There wasn’t any ill feeling about that, because the game was meant to be played rigorously, with fairness and all-out effort.”

Lacrosse is the preeminent indigenous sport of North America, played from the plains to the Atlantic. Tewaaraton (little brother of war) is the Mohawk word for “lacrosse”—a French word. The Ojibwe word for lacrosse is baaga’adowewin (the stick) and in Eastern Cherokee it is da-nahwah’uwsdi (little war).

Today, lacrosse is the fastest-growing sport in the United States. This year, Uganda, Belgium, China, Colombia, Costa Rica, Israel, Russia, Thailand and Turkey competed in the World Championships. Of the 38 countries to send teams to the games, the Iroquois Nation was the only indigenous nation.

Oren tells me that prior to the 2014 games, the members of the Iroquois Nationals had only practiced five times together. “I asked the U.S. coach, ‘What was your player pool?’ He said, ‘200,000. What’s yours?’ I replied, ‘100.’ That’s where we were this year. With Indians, the odds have always been out there.”

The lack of practice doesn’t show. The team is young and gifted, and on the field, their play is seamless, as if they are communicating with the Creator.

The history of lacrosse is also the history of attempts by the Iroquois Nation—the longest-standing democracy in North America—to gain recognition under international law.

In the last half of the 19th century, the East Coast, European-American elite adopted lacrosse as a collegiate sport. But the Native teams remained dominant. In the late 19th century and for much of the 20th, the Iroquois teams were so strong that the government of Canada excluded them from international competition on the pretext that, because they played exhibition matches to fund their travel expenses, they were professional athletes and ineligible.

During this time when the Iroquois were not permitted to play their own game at international events, they were denied political participation as a sovereign nation at the UN. Then, in 1977, Iroquois chiefs attended the first formal UN meeting on the rights of the indigenous people in the Americas. That meeting resulted in the “Declaration of Principles for the Defense of the Indigenous Nations and Peoples of the Western Hemisphere.” That same year, the Iroquois Confederacy issued Haudenosaunee (Iroquois) passports for international travel.

Six years later, in 1983, the Iroquois Nationals played their first game, and in 1984, the team was invited to tour England, where they won every game but one. Significantly, the team traveled using their Haudenosaunee passports.

In 1987, the Federation of International Lacrosse accepted the Iroquois Confederacy as a member nation, and in 1990, the Iroquois Nationals played in their first World Lacrosse Championships. (Only the United States, Canada, England and Australia have played in all 12 world tournaments.)

For the next 20 years, the team played around the world. Then, in 2010, the UK, refusing to recognize the passports, denied the Iroquois Nationals entry into Great Britain to compete in the championships.

“It was heartbreaking,” says Denise Waterman, Iroquois Nationals executive director and the mother of Iroquois Nationals general manager Gewas Schindler. “I remember thinking, ‘What will the children who are holding sticks think of us? Of all our dreams for sovereignty? Maybe they will think this is a tribe but they didn’t make it.” But, she says, when the team came home, “it was the total opposite. They were heroes. Little kids said, ‘I want to be an Iroquois National.’ ” (This is where Denise and I both get sort of teary.)

In the stands I meet Brian Miller, whose grandson Zach is a 19-yearold Seneca and a rising sophomore at Denver University. In the past year, Brian has driven his Ford F-150 pickup truck more than a dozen times from the Allegheny Indian Reservation in upstate New York to Denver—more than 3,200 miles round trip—to watch his grandson play home games.

On the edge of our seats on July 19, we watched the Iroquois Nationals as they, having lost to Canada and the United States, battled Australia for third place. They won 16 to 5 and took home the bronze medal—their first in the sport their ancestors originated centuries before.

So there it is. An epic story, which represents far more than a game for Indian country. It is a sport that nourishes traditions and, in many cases, education and leadership. More and more Native lacrosse players are getting recruited for colleges with scholarships. It inspires our youth.

Lyle Thompson, who this year received the NCAA’s Tewaaraton Trophy for best college lacrosse player (along with his brother, Miles), explains, “When I go back to the rez and talk to kids, the first thing I ask is, ‘How are your grades? Get your grades up no matter how hard it is.’ Second, ‘Keep loving the game.’”

“It’s almost a spiritual happening, these games today,” says Oren. “We used to settle wars that way, with a game. The game represents principles of equity and peace. The ball is a medicine. Somebody always loses, but we’ve lost a lot of games and we won’t be defeated. We won’t ever be.”

Winona LaDuke is Anishinaabe, a writer, an economist and a hemp farmer, working on a book about the Eighth Fire and the Green New Deal. She is ready for the Green Path, and would prefer not to spend her golden years cleaning up the messes of entitled white men. LaDuke lives and works on the White Earth reservation in northern Minnesota, where she founded the White Earth Land Recovery Project. She is program director of Honor the Earth and a two-time vice presidential candidate with Ralph Nader on the Green Party ticket.

There’s a Vanishing Resource We’re Not Talking About