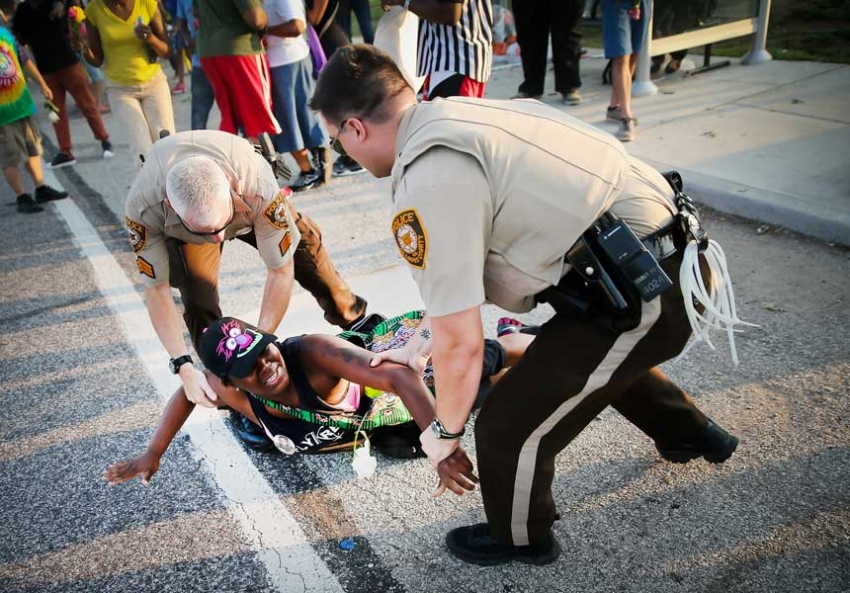 On August 19, in Ferguson, Missouri, a demonstrator is arrested while protesting the killing of teenager Michael Brown. (Photo by Scott Olson/Getty Images)

Can we stop the brutality?

'I don’t know of any movement going on right now against police brutality that has demilitarization as its priority. We are struggling for community control.'

In the fury over the police killing of an unarmed teenager in Ferguson, Missouri, it feels as though White America is waking up to what Black America has long known: Policing looks different in communities of color.

Here are the facts. Study after study has shown that low-income areas home to people of color are the most heavily policed. Blacks, despite being far less likely than whites to be found carrying weapons or drugs, are far more likely to be stopped and frisked by police, to have their vehicles searched, to be tased, to be shot, to be killed. As Jazmine Hughes explains on Gawker, black parents routinely have “the talk” with their sons on how to beat these odds: “Don’t wear a hoodie. Don’t try to break up a fight. Don’t talk back to cops. Don’t ask for help. … They’re all variations of a single theme: Don’t give them an excuse to kill you.”

Now, outrage over Ferguson has sparked a flurry of proposals to curb police violence and racism: body cameras, anti-racism training, accountability boards. Demilitarization, too, has been a rallying cry, after footage circulated of Ferguson officers using government-supplied tanks and tear gas to suppress protesters.

Yet police reform is notoriously easier said than done. In 2007, the city of Chicago set up a civilian body, the Independent Police Review Authority (IPRA), to investigate police misconduct after cries that the existing Police Board was corrupt and ineffective. According to an analysis by the nonprofit Chicago Justice Project, the rate of cases referred for discipline increased by only 0.28 percent.

So what can governments do to appease protesters? In These Times asked Frank Chapman, a field organizer for the Chicago-based National Alliance Against Racist and Political Repression, Frederick Collins, a police officer in Chicago’s near West District and a 2015 mayoral candidate, and Kristian Williams, the author of Our Enemies in Blue: Police and Power in America.

What do you think the impact will be of the Michael Brown protests? How hopeful are you that Ferguson can open a space for real change?

Frederick: I’m very hopeful. As a 21-year veteran of the Chicago Police Department, I am neither naïve nor blind to the changes we need to make within the department and law enforcement agencies around this country. To see youth mobilize so quickly around Ferguson via social media gives me hope. What made the civil rights movement begin to have an effect was youth, and gaining that media coverage.

Frank: The media is not an engineer of social change in our country. The civil rights movement spent many, many years fighting uphill. There were the boycotts, like in Montgomery, Alabama, that did not get overwhelming national support. Then the explosion took place, and the media acted like this was something new. Ferguson isn’t unique. Black citizens have been struggling against police brutality for a long time. Ferguson was a big spark to ignite a bigger movement. It gives us an opportunity to see in a microcosm what is going on in the whole entire country.

What demands should activists make?

Frank: In Chicago, we are fighting for an elected Civilian Police Accountability Council. [Editors’ note: The existing IPRA has an appointed head and a hired staff.] The council would appoint the Superintendent of Police, rewrite the police rule book—including all use of deadly force guidelines and standard operating procedures, investigate and prosecute police crimes, and have the final word regarding discipline in the Chicago Police Department.

Frederick: A civilian review panel is only part of the puzzle. You have to have diversity within the rank-and-file that reflects the communities the department serves. You also need blacks and Latinos in positions of power. In Chicago, we’ve got some really good officers working, but we only have speckles of African Americans in power in the police department.

Kristian: There may be secondary benefits to police departments becoming more diverse—helping normalize the idea that people of color hold positions of authority, for example—but I don’t think that they actually limit police racism and violence in the way that is suggested. The police force in Washington, D.C., is majority black in a majority black city. The cops in D.C. behave the same as cops everywhere else. Police violence and police racism aren’t just a matter of individual prejudice. Racism is institutional. It’s how policing evolved. It’s how it’s practiced in the day to day.

Frank: But you know white cops are racist. It comes out of their mouth when they approach us on the street. It’s part of their culture. The composition of the department tells you how little say communities have in how the police police them.

What about other reforms, like mandating police body cameras?

Frederick: I’ve talked about making sure the squad car cameras work in every car, and that police in riot gear have the small video cameras attached to their helmets. You see them in other cities, you don’t see them in Chicago.

Do you think demilitarization is important?

Frank: I don’t know of any movement going on right now against police brutality that has demilitarization as its priority. We are struggling for community control.

Frederick: When we talk about militarization, what we have to keep in mind is that it’s like being between a rock and a hard place. I have responded to calls where my 9mm was no match for the criminal element who had an AK47 and a bulletproof armor vest. But I am not for using armored tanks and military tactics against American citizens who are convening to voice dissent.

Kristian: It’s telling that President Obama and Attorney General Eric Holder are suddenly concerned about the militarization of the police when previously they were actively engaged in militarizing the police. We have an opening here to push for reversing that process—reducing the police weaponry, reducing the military hardware. But reform measures have a tendency to re-legitimize the institution. They can make the police seem like they have repaired themselves; that the problem is not really with the institution but instead with the gear and the equipment.

So do you think any reform measures can be worthwhile?

Kristian: Reforms that open up space for active resistance against racism and poverty, and that put a check on the worst police abuses, should be pursued. But there’s not a review board in the world that’s going to change fundamental inequality. That requires a social movement and a more ambitious agenda. At the end of that, what we’ll see is not better police, but something to take their place, to guarantee public safety and resolve disputes without ubiquitous  surveillance and violence.

Kristian:  It’s hard to generalize. In Our Enemies in Blue, rather than comeup with my utopian fantasy, I look at situations where the police have been so discredited and the social movement so powerful that people stopped looking to the cops for public safety, and started looking to social movements. A restorative justice project in Northern Ireland and “street committees” in South Africa share certain features: They are both very participatory, localized and emphasize a restorative, reparative approach to justice rather than retribution or punishment. But they are also very different and were so tailored to their unique situations that it’s hard to know how they would transfer to the United States. In practical terms, solutions are going to have to arise from communities. A good start is asking people what it is they are looking for in public safety. Some of those things the existing criminal justice system gives us. Some, it doesn’t.

Frank: A Civilian Police Accountability Council would be a step forward. The struggle for reform has to take place before the struggle for revolution. People don’t just say, “Let’s dump the system.” First, they got to fight for things within the system that they believe they’re entitled to. And only when they come to the understanding that they absolutely cannot get them will they take more drastic measures.
People in the communities affected by police crimes, by brutality, by racial profiling, know what they want. They want justice. The mothers we work with, they want their sons out of jail, sons who’ve been framed up by police for crimes they did not commit and subjected to torture. African Americans want some say over the use of guns in their communities. Not just in terms of the gang bangers, but also the police. The struggle to determine how police policies are made—that’s a struggle for political power.