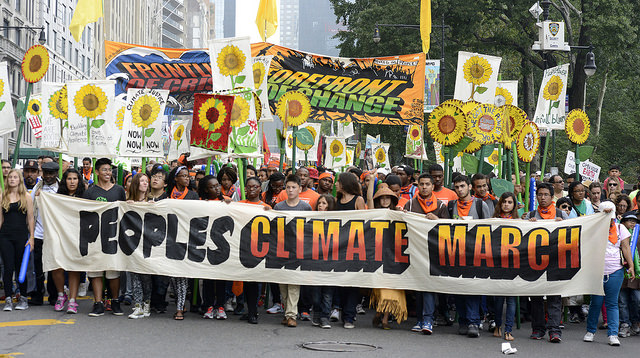 Organizers are reporting that 400,000 marched in the streets of New York on Sunday, and thousands are descending on Wall Street today. (Flickr / Stephen Melkisethia)

Sunday’s climate change protest in New York was bigger than the 1963 March on Washington. What’s next?

As the planet’s carbon problem has become more dire, mainstream green groups are developing a penchant for direct action.

If the estimates of organizers are correct, then the 400,000 people who marched in Manhattan on Sunday took part in one of the largest mass mobilizations in American history—more than the March on Washington and right up there with the biggest of the anti-Iraq and Vietnam war rallies.

“I feel so tiny right now, but I feel like I’m a part of something huge,” says Erika Weiskopf, a student at Swarthmore College in Pennsylvania, who came to the march with dozens of classmates. “It’s amazing to be here with people who have the same priorities that I do. It’s nice to not feel alone.”

“We really need to do something now,” says Ryan Wade, who took a bus to the rally from Philadelphia. “Climate change is already happening. It’s starting to impact us and it’s only going to get worse.”

Initiated by 350.org and the online advocacy group Avaaz—and planned to coincide with a pivotal United Nations environmental summit—the People’s Climate March pieced together a gigantic coalition that exemplified a “big tent.”

“It’s incredibly important to show that hundreds of thousands of people are unified in wanting to see action taken and that is what’s most important about this,” says May Boeve, executive director of 350.org. “We haven’t been able to do that before.”

“It is true that in recent years there was a reluctance from the Sierra Club to do these kinds of larger, national events,” says Sierra Club Executive Director Michael Brune, who famously ended the group’s longstanding ban on civil disobedience when he tied himself to the White House gate and was arrested at a Keystone XL protest on February 13. “I think as new people have come on, we realized that is a role we have to play.”

I asked Brune what he thought of Naomi Klein’s latest book, which argues we need to ditch capitalism to save the planet.

“I think we do need to see a more rapid [inclusion] of economic, social and political values that will enable us to address common causes,” Brune says. “What we call the economic system that emerges from that, that’s unclear to me. But I think Naomi’s critiques are strong and valuable and some of the solutions she offers are practical and helpful.”

Despite the march’s impressive size, and the national and international headlines it generated, questions linger over its overall impact.

The march had no official set of demands, and a quick stroll along the slow-moving procession revealed a cacophonous mix of messages. Posters stated everything from “Cook Organic—Not the planet,” “Carbon Tax Now,” “No Coal Exports” and “Stop Capitalism” to “Horse Abuse Is Not Romantic—Stop Horse Abuse.”

Some on the Left have derided the action as little more than a PR stunt, designed to fundraise rather than build a movement.

Others worry the march will not translate into anything concrete.

May Boeve, from 350.org, disagrees. Plenty of those who made the trek to New York are already engaged on issues in their hometowns, she says, and connecting with a larger movement will give those campaigns a boost.

“Mass mobilizations play a particular role, which is, we get to see each other in the movement,” Boeve says. “We get to be wowed and amazed by what we’re capable of, by how we’re growing. That gets translated into victories on a number of key fronts.”

Al Gore probably won’t be there.