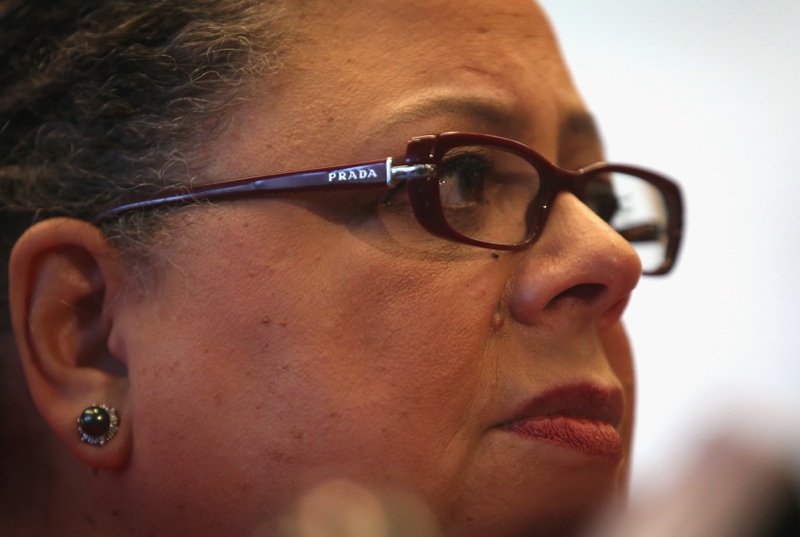 'It's not about me, it's about a movement,” has been Karen Lewis' mantra. After her departure from the Chicago mayoral race, her allies are taking those words to heart. (Scott Olson/Getty Images)

She’s out of the race, but the movement continues to build.

Lewis’s campaign could have offered a template for how a populist message—carried by the right candidate and backed by aggressive grassroots voter registration, education and turnout—can neutralize the oligarchs’ money.

The news that Chicago Teachers Union President Karen Lewis will not run for mayor of Chicago due to illness is heartbreaking.

Speaking as a colleague, comrade and friend, I can say with certainty that Karen Lewis is one of most brilliant and committed labor leaders today. Underneath her down-to-earth demeanor are nerves of steel.

After she took office, I attended several debates between Lewis and Etoy Ridgnal, then a local director of Stand for Children, a corporate-backed booster for school privatization. The Chicago Urban League debate was particularly instructive. After Lewis schooled her opponent about the relationship between race, poverty and education—the “opportunity gap”—an African American woman, in apparent awe of Lewis, asked me why no one had explained the connection “like she just did.” She wondered out loud why other union leaders had “allowed them to blame the teachers.”

At one point, Lewis interrogated Ridgnal about the rightwing billionaires who fund Stand for Children—like the Walton Family Foundation, started by Walmart’s founders. As Ridgnal, seemingly flummoxed, processed the question, Lewis, with visible contempt, questioned how “these rich white people can pretend to love our children more than we do.” I recall that moment because Lewis’ emotion touched me, and the audience went wild.

But she wasn’t done. Lewis dared Ridgnal to reconcile her funders’ newfound sensitivity to the needs of black children with business practices and actions—Walmart’s low wages and right-wing politics—that marginalize black workers and impoverish their neighborhoods. The debate was effectively over.

A formidable polemicist, Lewis unflinchingly tackles race—once calling Mayor Rahm Emanuel’s education agenda “racist”—in ways her white counterparts cannot. She and the CTU have almost singlehandedly rehabilitated the labor brand in Chicago by addressing the issues affecting poor and marginalized communities. The CTU has made racism a central issue in everything from contract negotiations to marches against school closings. Lewis became so popular in black communities—unusual for a contemporary labor leader—that the first calls for her to run for mayor started there.

Lewis’ usually low-key style may make her opponents underestimate her. Jonah Edelman, co-founder of Stand for Children, is a case in point. In 2011, Edelman bragged to a group of wealthy corporate backers that he had outmaneuvered CTU with the passage of a bill requiring a 75 percent strike authorization threshold for the union. Edelman was confident the union could never muster the votes. A year later, 98 percent of Lewis’ union voted to authorize a strike. On September 10, 2012, they went on strike. Edelman has since receded into the background, and is seldom heard from.

Upon taking office in 2011, Mayor Rahm Emanuel adopted the rhetoric of corporate education “reformers” such as Stand for Children, casting himself as the champion of black children and the CTU as the defender of the status quo. With no mention of poverty—the real driver of student achievement—he demanded an extension of the school day and, in an end run around the union, offered financial incentives to teachers if they would agree to work longer days. He, too, would find out the hard way who Karen Lewis was.

Citing labor law, Lewis accused Emanuel of altering the terms and conditions of employment outside collective bargaining—an illegal act. Emanuel lost the legal battle. Then Lewis—who did not object to a longer school day—went further and demanded that the extra school hours be filled with programs that had been lost to budget cuts, such as art, music, drama, languages and physical education. As the teachers went on strike, it became clear that Lewis and the CTU had won over public opinion. Polls showed that the majority of Chicagoans supported the striking teachers. Furthermore, almost 90 percent wanted teachers to be compensated for the longer school day. The progressive impulse is alive and well in Chicago communities, in particular among African Americans and Latinos—folks who know something about servitude.

Lewis has legions of fans and supporters, including many In These Times readers. Our thoughts are with her as we wish for a quick and full recovery. But while she recuperates, the potential impact of Lewis’ absence from this race is too urgent to set aside.

Her insurgent campaign promised to shake up a city whose politics had atrophied, thanks to corporate capture of the city’s political institutions. For 22 years, under Mayor Richard M. Daley, an outsized corporate role in municipal elections—through campaign contributions and outright corruption—secured a pro-business political climate that marginalized the public voice and was faithfully enforced by the mayor and his perennially compliant City Council. Daley’s school privatization scheme, his privatization of city parking meters, and his 2006 veto of a popular living wage ordinance are only a few examples.

During Daley’s six-term tenure from 1989 to 2011, those corporate big pockets scared off any serious challengers, turning mayoral elections into coronations. Without Karen Lewis in the 2015 race, the same ritual will likely play out again. It is disheartening that Emanuel will face no serious progressive challenge, even as polls show his popularity is somewhere between that of used car salesmen and Ebola.

A fearless progressive, Lewis would have offered a sharp ideological contrast with Mayor Rahm Emanuel. She has embraced movements and causes, beyond education, that directly challenge the city’s corporate elites: fast food workers’ Fight for 15 campaign; a financial transactions tax on stock sales and other financial trading, which would generate billions for the city treasury; a $15-an-hour minimum wage; and of course, an elected school board. Lewis continually makes the link between poverty and violence, and talks of the need to prioritize higher wages, union rights and other strategies for worker uplift, which she sees not just as a social justice issue, but an educational imperative—family income is the number-one predictor of a child’s success in school. Lewis' union has urged immediate release of hundreds of thousands of dollars in in federal housing vouchers intended to help struggling families, which have been withheld by the Chicago Housing Authority (CHA). Most recently, Lewis endorsed an ordinance for the city to make reparations to victims of police torture under the notorious Chicago Police Commander Jon Burge—something no other labor leader has done.

Compare these views with Rahm Emanuel’s. He declared the financial transaction tax off the table and begrudgingly offered a $13-an-hour compromise to the proposed $15 minimum wage (which over 80 percent of voters support)—a political sacrifice necessitated by the issue’s popularity and importance to Democrats in this election season. Emanuel has withheld the housing vouchers for families in need, even as the CHA enjoys a budget surplus. On the question of compensation for Jon Burge’s victims, he has hemmed and hawed for a year.

Whether or not Lewis won, the fight would have forced Rahm Emanuel to elucidate and answer for his pro-corporate policies. And her positions offer a glimpse of what the election platform of a viable progressive candidate might look like. With few exceptions, Democrats elsewhere are running distressingly vacuous campaigns that elide major issues like economic inequality, race and climate change.

Taking on Emanuel would not have been easy. He has already raised more than $9 million. Were Lewis to lose, despite polling 9 percentage points ahead of Emanuel in July, her campaign could have, at the very least, further exposed the distorting role of money in politics. And were she to win, it could have offered a template for how a populist message—carried by the right candidate and backed by aggressive grassroots voter registration, education and turnout—can neutralize the oligarchs’ money.

Lewis’s departure from the race was a huge blow to the Chicago Teachers Union and its grassroots allies. But despite their disappointment, they are not conceding anything in this election. As movement builders, they take a long view of events. So they are proceeding with a grand strategy to alter the city’s power dynamics. In coalition with United Working Families, they are campaigning to reshape the City Council by electing progressives. An independent council will be the best counterweight to Emanuel's corporate agenda, in the event that he wins.

A key strategy is to force aldermen to go on record on an array of issues—affordable housing, budget cuts, school closings, economic development and more—or face electoral consequence. The keystones of this effort are petition drives to put the elected school board question and the $15-an-hour minimum wage on the November ballot. Organizers hope to use both initiatives to motivate voter turnout. (The power to appoint the school board is so important to Emanuel he has conditioned his support for any aldermanic candidates upon their opposition to an elected board.)

Every Vote Counts, a voter registration coalition affiliated with the CTU, has registered more than 100,000 new voters. Action Now, an Every Vote Counts member and a CTU community ally, has independently registered 18,000 voters in 10 wards, constituting 20 percent of eligible voters there, according to director Katelyn Johnson. Many other union-allied community groups—Kenwood Oakland Community Organization, Brighton Park Neighborhood Council, Albany Park Neighborhood Council, Pilsen Alliance, to name just a few—are similarly engaged. And eight CTU members are running for City Council seats. They have adopted a progressive platform around educational and economic justice issues.

These leaders, activists and organizations—not to mention thousands of CTU members, parents and students who found their voice in the 2012 strike—provide the critical infrastructure necessary for continued community struggles; future electoral endeavors; eventual dismantling of machine politics; defense of progressive political allies; and a strong social movement to confront, in perpetuity, unchecked and corrosive corporate power. As Johnson declared, “We’re in it for the long haul. We don’t do any work in a vacuum.” These activists are well schooled in the perils of electoral work, especially when conducted in isolation, disconnected from long-term base-building.

Karen Lewis’s legacy as union president is her commitment to building exactly these kinds of strong, bottom-up movements, led by grassroots community folks and union members. Lewis herself reaffirmed upon stepping down, “It's not about me, it's about a movement.” It’s the same mantra she has repeated during her past four years as Chicago Teachers Union president. In her stepping aside, Chicago has been robbed of a true people’s fighter in the mayoral race. But regardless of who gets elected, as progressives we should never stop building our movements—just as Karen Lewis has always insisted.

An updated version of this story ran in the December 2012 issue of In These Times.