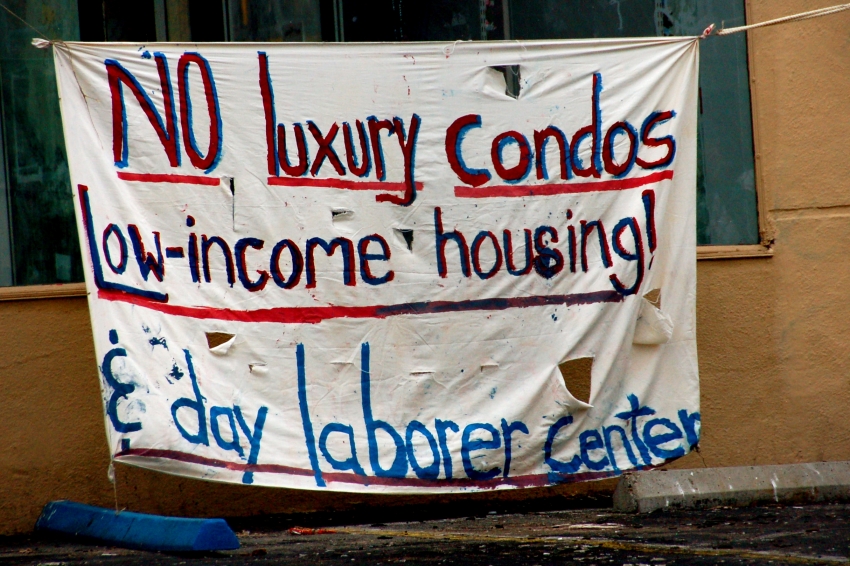 Gentrification raises rent and displaces the poor, but many argue that it is a natural historical process, and even a good thing. (via Brooke Anderson/Flickr)

Some activists are trying to beat back the tide of the market.

Can affluent white urbanites be ethical gentrifiers? Can a community retain its cultural history and affordable rents, and still thrive economically and expect to have its trash picked up?

During a lecture in Brooklyn in February, director and native New Yorker Spike Lee took up the issue of gentrification. “You can’t just come in when people have a culture that’s been laid down for generations,” said Lee. “You come in and now shit gotta change because you’re here?” Lee skewered the changes happening in his Brooklyn neighborhood of Fort Greene and countless other urban spaces across America as development drives up rents and pushes out long-time residents, often low-income people of color.

Lee is not the only one riled up. In San Francisco, where median rental housing prices in gentrifying neighborhoods have increased 40 percent since 1990, low-wage workers say they are being forced to move farther and farther from their jobs in the city—making commutes significantly longer and sometimes prohibitively expensive. Critics also decry the loss of cultural memory as gentrification breaks up communities that have long labored and lived in a neighborhood, and local businesses are replaced by boutiques.

On the flip side, some argue that gentrification provides a much-needed infusion of cultural capital in cities like the once-struggling Des Moines, Iowa, now billed as the new playground for hipster millennials. And as private investment and white newcomers flood in, public services follow—as Lee notes, “Garbage wasn’t picked up every motherfuckin’ day when I was living in 165 Washington Park.”

For those who live in neighborhoods with changing demographics, the immediate question is whether anything can be done. Can affluent white urbanites be ethical gentrifiers? Can a community retain its cultural history and affordable rents, and still thrive economically and expect to have its trash picked up?

Since the 1930s, policymakers have fumbled in their attempts to provide equitable and affordable housing. The history of the last century is one of failures: Large-scale public housing was abandoned by city governments in the 1990s amid neglect and rising urban poverty, few cities have attempted to impose strict rent control and, most recently, little has been done to meet the need for affordable rental housing for seniors.

In These Times brought together four people with different angles on the debate to discuss whether gentrification can—or should—be stopped: Rosemary Ndubuizu of ONE D.C., a city-wide organizing group; Britt Julious, a Chicago-based cultural critic; Adelaide Meyers, an activist with the Chicago housing group ONE Northside who was herself displaced by rising rents; and Steve Conn, a professor at Ohio State University who teaches urban history.

Let’s start at the beginning. What is gentrification?

Adelaide: It’s when developers come in and systematically push people out of a neighborhood that’s mostly poor ethnic minorities.

Rosemary: Actually, gentrification starts with the government, which is always trying to figure out ways to drive resources back into cities. Governments will invest in things like a subway or other transportation or a particular building, or provide tax incentives, in order to create capital accumulation in urban spaces, while turning a blind eye to how it has a domino effect on displacement.

Is gentrification always a bad thing?

Steve: I think that there are all kinds of benefits that come from reinvesting in urban neighborhoods. Across most of the old manufacturing centers, the opposite of gentrification has been systematic disinvestment. I think that pitting new arrivals against residents who are already there is also a kind of false dichotomy. The problem of housing in cities is not a problem created because some artists moved into SoHo warehouses in the 1970s and that neighborhood began to change. The problem of housing is about a whole variety of ways in which we’ve disinvested from middle-income and lower-income housing since the mid-1970s.

Adelaide: I was one of the people systematically pushed out because I have a disability and I am low-income. The developers in Uptown in Chicago are buying all these Single Room Occupancy (SRO) buildings—including the one I used to live in and closing them down. If you’re going to invest in a neighborhood, it’s more ethical to benefit the people who are already living there.

Adelaide: I do believe that race and poverty are factors. African Americans, Latinos and poor people are basically dehumanized because we see them as “other,” so we push them out of their homes to make money.

Steve: I want to take you up and down Spruce Street and Pine Street of Philadelphia between about 5th and 20th Streets. The neighborhood was built early in the 19th century and housed mostly working-class Irish dock workers. By 1900, the neighborhood had changed entirely from white to black— that’s W.E.B. Du Bois’ Seventh Ward in his study of the Philadelphia Negro. By the 1950s, that neighborhood was being quietly referred to as the “gayberhood” because it’s where gay men, mostly, had begun to move in. So, is this gentrification, or is this the changing dynamics of city neighborhoods through a historical lens? Harlem wasn’t black, originally. We all know that.

Rosemary: Within any capitalist structure, neighborhoods do change. But we can’t ignore the fact that there are some very clear adverse consequences for certain groups. ONE D.C. believes there’s a racist ideology about poor people of color in urban spaces that allows the government to push gentrification and pro-market policies, often at the expense of poor black residents.

Let’s talk solutions. Are individuals responsible for mitigating some of the negative effects of gentrification?

Britt: I don’t necessarily know if there’s any one thing an individual can do to alleviate something that is far larger and more complicated. Maybe the task of the individual is to find other like-minded people who are also interested in alleviating the effects of gentrification—people who can work together and come up with minor action plans that will at least ensure some of the population can stay.

Adelaide: There wasn’t much that I could do as an individual. But now that I’ve joined forces with other people, I’ve found there is something I can do. In Chicago, we’ve introduced an ordinance in the City Council that gives nonprofits, or even the tenants themselves, the option to buy an SRO building first and make sure vulnerable people can still live in it.

What about other communal solutions, like rent control or community ownership of land, which are being proposed in San Francisco?

Rosemary: Rent control has its problems. In Washington, D.C., rent in rent-controlled apartments is allowed to go up a certain amount each year—2 per-cent plus inflation. After awhile, it ends up being pretty unaffordable.

Adelaide: Rent control would not necessarily be a silver bullet, but I think it would help. We need to have policies in place that lock in affordable housing and let current residents benefit from new investment.

Rosemary: Instead of rent control, we believe that it’s important for us to collectively control our resources through structural alternatives like housing cooperatives, worker cooperatives and worker centers. These alternatives let us better control what happens in our community, as opposed to letting the avalanche of gentrification and third-party opinions dictate where and how people live.

Steven: There’s a long, long tradition in this country of somehow thinking that we can solve all our social problems through housing. Economic issues like wage stagnation aren’t going to be solved by housing. Housing is the consequence, not the cause. What we need is a different set of economic arrangements whereby the working class is no longer the working poor.