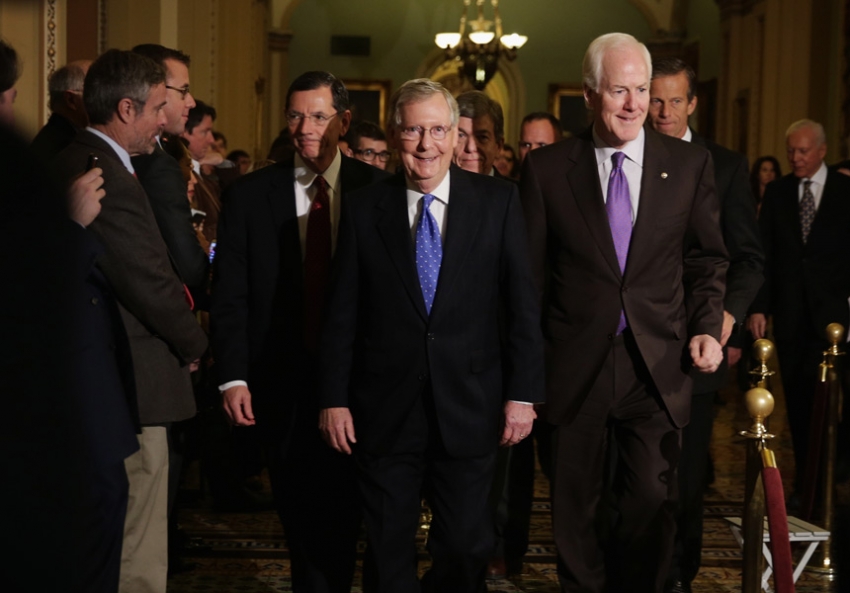 Today, 49 percent of Republicans and 33 percent of Democrats say they would be upset if their child married someone from the opposite party. (Alex Wong/Getty Images)

We Can’t All Just Get Along

In our era of polarization, one party is guiltier than the other.

This isn’t like a fight between siblings, where the parent says, 'It doesn’t matter who started it.' Yes, it does.

Editor's note:  This article was originally titled “We Can't All Just Get Along” in the print version of the magazine.  The title was then changed, without the author's knowledge or approval, to “It's Okay to Hate Republicans.”  The author rejects the online title as not representative of the piece or its main points. Her preferred title has been restored. We have also removed from the “Comments” section all threats to the author's life and personal safety.

I hate Republicans. I can’t stand the thought of having to spend the next two years watching Mitch McConnell, John Boehner, Ted Cruz, Darrell Issa or any of the legions of other blowhards denying climate change, thwarting immigration reform or championing fetal “personhood.”

This loathing is a relatively recent phenomenon. Back  in the 1970s, I worked for a Republican, Fred Lippitt, the senate minority leader in Rhode Island, and I loved him. He was a brand of Republican now extinct—a “moderate” who was fiscally conservative but progressive about women’s rights, racial justice and environmental preservation. Had he been closer to my age, I could have contemplated marrying someone like Fred. Today, marrying a Republican is unimaginable to me. And I’m  not alone. Back in 1960, only 5  percent of Republicans and 4  percent of Democrats said they’d  be “displeased” if their child married someone from the opposite  party. Today? Forty-nine percent  of Republicans and 33 percent of  Democrats would be pissed.

According to a recent study  by Stanford professor Shanto  Iyengar and Princeton researcher  Sean Westwood, such polarization has increased dramatically  in recent years. What’s noteworthy  is how entrenched this mutual animus is. It’s fine for me to use the word “hate” when referring to Republicans and for them to use the same word about me, but you would never use the word “hate” when referring to people of color, or women, or gays and lesbians.

And now party identification and hatred shape a whole host of non-political decisions. Iyengar and Westwood asked participants in their study to review the resumés of graduating high school seniors to decide which ones should receive scholarships. Some resumés had cues about party affiliation (say, member of the Young Republicans Club) and some about racial identity (also through extracurricular activities, or via a stereotypical name). Race mattered, but not nearly as much as partisanship. An overwhelming 80 percent of partisans chose the student of their own party. And this held true even if the candidate from the opposite party had better credentials.

How did we come to this pass? Obviously, my tendency is to blame the Republicans more than the Democrats, which may seem biased. But history and psychological research bear me out.

Let’s start with the history. This isn’t like a fight between siblings, where the parent says, “It doesn’t matter who started it.” Yes, it does.

A brief review of Republican rhetoric and strategies since the 1980s shows an escalation of determined vilification (which has been amplified relentlessly on Fox News since 1996). From Spiro Agnew’s attack on intellectuals as an “effete corps of impudent snobs”; to Rush Limbaugh’s hate speech; to the GOP’s endless campaign to smear the Clintons over Whitewater, then bludgeon Bill over Monica Lewinsky; to the ceaseless denigration of President Obama (“socialist,” “Muslim”), the Republicans have crafted a political identity that rests on a complete repudiation of the idea that the opposing party and its followers have any legitimacy at all.

Why does this work? A series of studies has found that political conservatives tend toward certain psychological characteristics. What are they? Dogmatism, rigidity and intolerance  of ambiguity; a need to avoid uncertainty; support for authoritarianism; a heightened sense of threat from others; and a personal need for structure. How do these qualities influence political thinking?

According to researchers, the two core dimensions of conservative thought are resistance to change and support for inequality. These, in turn, are core elements of social intolerance. The need for certainty, the need to manage fear of social change, lead to black-and-white thinking and an embrace of stereotypes. Which could certainly lead to a desire to deride those not like you—whether people of color, LGBT people or Democrats. And, especially since the early 1990s, Republican politicians and pundits have been feeding these needs with a single-minded, uncomplicated, good-vs.-evil worldview that vilifies Democrats.

So now we hate them back. And for good reason. Which is too bad. I miss the Fred Lippitts of yore and the civilized discourse and political accomplishments they made possible. And so do millions of totally fed-up Americans.