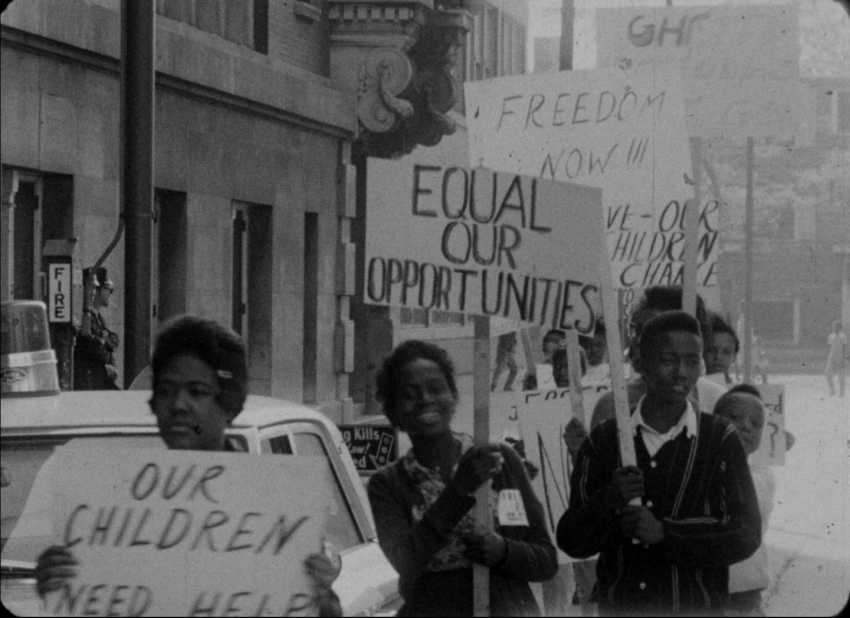 Racial segregation in many charter schools isn't far from the Civil Rights-era levels that these Chicagoans protested. (Kartemquin)

Charters’ defenders like to position themselves as 21st century civil rights activists. But a Delaware lawsuit alleges that charters are actually worsening racial inequality in the state.

Because the case is being filed with the federal government, these actions could have implications for school districts everywhere—and there is already plenty of data tying charter schools to segregation.

Charter schools are often promoted as a tool to address educational inequities, but a potential precedent-setting legal case launched earlier this month says the opposite. In filings with the U.S. Department of Education, two Delaware nonprofit groups allege that some of the state's publicly funded, privately managed schools are actively resegregating the education system—and in a way that violates federal civil rights law.

The complaint, by the Delaware branch of the American Civil Liberties Union and the Community Legal Aid Society, cites data showing that more than three-quarters of Delaware's charter schools are “racially identifiable”—a term that describes schools whose demographics are substantially different from the surrounding community.

The groups are asking the Obama administration to take specific steps, including prohibiting subjective admissions policies for charter schools and barring extra fees for attending charter schools—factors they say discriminate against low-income, disabled and minority students.

Because the case is being filed with the federal government, these actions could have implications for school districts everywhere—and there is already plenty of data tying charter schools to segregation.

In 2010, a University of Colorado report analyzing charter schools found that “as compared with the public school district in which the charter school resided, the charter schools were substantially more segregated by race, wealth, disabling condition and language.” Similarly, in reviewing a decade worth of research about charter schools, George Washington University education researcher Iris Rotberg earlier this year concluded that “charter schools often lead to increased school segregation … and lead to the stratification of students who were previously in integrated environments.”

Meanwhile, a General Accountability Office study in 2012 showed that “charter schools enrolled a lower percentage of students with disabilities than traditional public schools.”

The causes of educational segregation are a point of debate. Charter school defenders, for example, argue that the trends may merely reflect geography.

“A naive examination … appears to show that the critics are right: More choice is associated with minority students attending less diverse schools,” wrote the Brookings Institution's Matthew M. Chingos in his 2013 study of education data. “Of course, this relationship ignores the fact that charters tend to locate in areas that serve large shares of disadvantaged students and members of minority groups. As a result, this simple correlation tells us nothing about whether charters increase segregation or just tend to locate in areas where the schools are already segregated.”

“These requirements include high examination scores, essays written by parents to explain why a school is a good choice for their child, access to gifted and talented elementary and middle school programs that help increase academic performance, annual activities fees, mandatory parent involvement and mandatory high-cost uniform purchases,” the ACLU said in a statement announcing the complaint. “Such barriers prevent students from low-income African-American and Hispanic families from having the same access to high-quality charter schools that middle- and upper-class families have.”

In May, the Department of Education warned charter school administrators that their admissions policies “may not use admissions criteria that have the effect of excluding students on the basis of race, color or national origin.”

That warning was issued almost exactly 60 years after the historic Brown v. Board of Education ruling that began officially desegregating America's schools. In those six decades, much progress has been made on civil rights—but the trends documented in Delaware show there is still a long way to go.