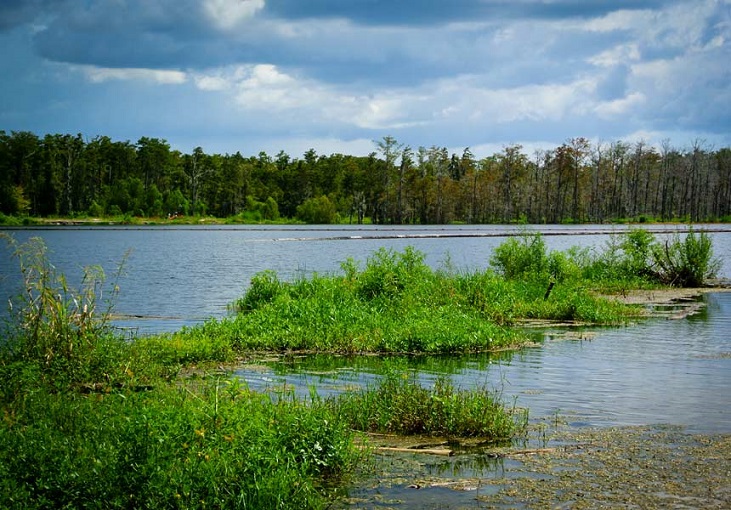 The Bayou Corne sinkhole, caused by an oil industry well, has swallowed 32 acres of Louisiana and forced the evacuation of a town in the heart of Cajun country. (Kendra Pierre-Louis)

Will the eaters of étouffée disappear along with the Louisiana bayou?

While broader American culture seems hellbent on cleaving itself from any identity dependent on a physical landscape, Cajun identity is completely intertwined with a sense of place.

On first glance, the Bayou Corne sinkhole doesn’t look like much. The 32-acre rent in the earth in the thick of Louisiana’s Cajun Country can easily be mistaken for a lake. The only hint of something amiss is a 40-inch-thick empty pipe floating on the water’s surface—and the fact that I must wear a life vest on dry land (although I’m not sure what protection the vest will afford if the ground collapses).

To see the true impact of the sinkhole, one must travel half a mile west to the town of Belle Rose. The streets, like Sauce Picante Lane and Jambalaya Street, stand eerily empty. Most of the town’s 350 inhabitants have fled.

The sinkhole formed after the collapse, two years ago, of a vast underground salt dome mine operated by Texas Brine. Salt domes are injected with fresh water through surface wells—a little-known cousin of fracking—and the resultant brine is pumped to the surface to help transform oil into plastic, leaving a cavern behind. One such cavern, Oxy Geismar No. 3, gave way after it was mined too close to its edge.

When Oxy Geismar No. 3 caved in, it didn’t just create the Bayou Corne sinkhole—it also released fumes from 8,000 barrels of trapped crude oil that were noxious at best, toxic at worst. Texas Brine and the Louisiana Office of Homeland Security found the air quality to be safe, but residents believe it wasn’t monitored quickly enough to know.

Because of the threat of the sinkhole’s expansion, the town is under a mandatory evacuation. But resident Dennis Landry, Cajun by birth, is staying put. His voice thickens as he explains, “If you’re from South Louisiana, you want to live on the river or lake or bayou [the marshy outlet of a lake or river]. … It would be virtually impossible to replace a paradise like this.”

Belle Rose sits directly on Bayou Corne, where the town’s residents once routinely boated and fished. Most Cajuns still get much of their diet from what mainstream America would call subsistence: a deep tradition of living off the land, including hunting and fishing.

But the town’s connection with the marsh went beyond the pragmatic. Landry says, “You can walk directly out to the bayou [and] enjoy the beauty of nature 365 days a year. It would not be uncommon to see an alligator. You would not be shocked or surprised to see a beautiful American bald eagle, a bass, an egret or a heron.”

Sinkholes aren’t the only thing eating away at Southern Louisiana—since 1932, the region has lost a Delaware-sized  amount of land to various forces. The levees that hold back floods keep Mississippi River sediments from replenishing the delta. The erosion is hastened by oil and gas development, which the Interior Department estimates is responsible for up to 59 percent of the wetlands loss. The state is pocked with 50,000 oil and gas wells and crisscrossed by 10,000 miles of canals. The state has not held the oil and gas industry to its obligations to restore the land or fill in abandoned canals, which slowly widen and pump salt water into freshwater marshes. According to a recent ProPublica study, most of Cajun country will be underwater in 50 years, prompting “the largest forced migration for environmental reasons in the history of the country.”

The loss of Cajun culture is already underway. The levees are diverting the sediment that once sustained the delta into the Atchafalaya basin, America’s largest river swamp, where Cajun Country sits. As the basin silently fills, bottomland hardwood forests are replacing the cyprus swamp that has formed the basis of Cajun life for generations.

A swampland and its people

The fingerprints of Cajun culture—which contains a number of regional traits lumped under the umbrella term—can be seen across the United States, most recognizably in our food: red beans and rice, tabasco sauce, gumbo.

Cajun is a derivative of the word Acadian, the region of Eastern Canada where some 11,500 colonists, many of mixed Native American and French heritage, were expelled by the British during the 18th-century French and Indian War. After being shipped to France or scattered along the East Coast and the Caribbean, many migrated to Louisiana, believing it to be under French control. By the time they arrived, Louisiana was in the hands of the Spanish, who welcomed them to stay—in the swamps.

The migrants adapted to the region’s fluctuating water levels, favoring houseboats and campsites over more permanent homes. They grew sugarcane and other crops on dry land, logged, trapped and hunted on land that was too flood-prone to farm, and shrimped and fished in the wetlands. That’s why, while broader American culture seems hellbent on cleaving itself from any identity dependent on a physical landscape, Cajun identity is completely intertwined with a sense of place.

“Everything in Louisiana that is celebrated across the nation and across the world was born out of that true experience of people settling and living in a very wild environment,” says Louis Michot, a fiddler and vocalist for the Southern Louisiana band the Lost Bayou Ramblers. “It’s based on suffering. So much of the music and the food ways come from learning how to survive.”

When the English exiled the Acadians, they deliberately split families. The Acadians fought to reconnect, some making long voyages from France to Louisiana in an era before airplanes. Many died. Today, families are very close: It’s common for three generations to gather together every Sunday for family dinner.

Now, however, young Cajuns are increasingly leaving home. With environmental degradation depressing shrimp and oyster populations and farmed seafood from Asia depressing prices, “many young people don’t even want to go into fishing anymore, because it’s not going to pay them,” says Stacey Scarce, a naturalist and curator in the region. “Some leave to go to college, some go into the oil fields, which may take them away from their family.” Dennis Landry, for example, spent 20 years working in oil and gas before he chose to semi-retire in Belle Rose.

Cajuns aren’t just the victims in this narrative. While their tradition of living off the land continues, Cajuns also buy food at the grocery store. That option stems from having enough good jobs—most of them directly or indirectly from the very oil and gas industry that is destroying opportunities for fishing and hunting. “It’s a paradoxical situation,” says Michot. Cajun Country has become the epicenter of oil and gas development in Louisiana, and has among the highest average wages. In a state where hunters and trappers make an average of $21,000 a year and fishers make $31,000, oil and gas derrick operators earn $49,000 and drill operators, $60,000.

For its part, the oil and gas industry appreciates Louisiana’s “facilitating” ways, which include speedy environmental permitting and aggressive courtship by Republican Gov. Bobby Jindal. The governor recently got the legislature to squelch a suit by a local levee board that charged 97 oil, gas and pipeline companies with “mercilessly” destroying the environment. Eight companies announced last year that they will invest a total of $47 billion to build or expand liquefied natural gas plants—all in Cajun Country. They say they will hire locally as much as possible.

Michot explains: “Louisiana is a land of  extremes—one of the poorest states with the worst education, but with great music and food and the most natural resources. It’s full of a bunch of very good, real people who happen to live in the middle of exploitation and corruption. We’re wrapped up in the systems that keep the rich rich and the poor poor. In the end, we’re the victims and the benefactors all at once.”