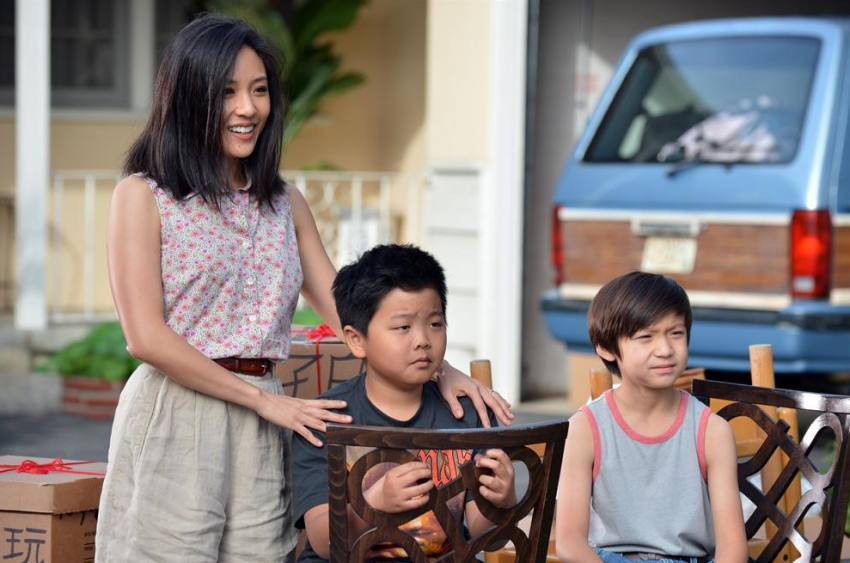 Fresh Off the Boat: At Last, a Show Where Asian-Americans Aren’t the Butt of the Joke

In a welcome departure from most depictions of Asian families, Fresh Off the Boat pokes fun at the ignorance and blandness of white American culture.

It’s not the most sophisticated racial humor, but at a time when mainstream comedy continues to rely on racial stereotypes, lampooning the racists instead of the racialized is a step in the right direction.

Twenty  years  ago  this March, All-American Girl, a network sitcom starring Margaret Cho as the daughter of a Korean-American family, was cancelled after a single disappointing season. Although the intervening decades have seen a slow but steady increase in the available roles for Asian-American actors on television, the debut of Fresh Off the Boat on ABC in February was the first time that an Asian-American family was back at the center of a primetime television show.

Based on the eponymous memoir of writer and chef Eddie Huang, Fresh Off the Boat follows a fictional Eddie at age 11 in 1995, as he and his family adjust to a new life and new neighbors, after moving from Washington, D.C.’s Chinatown to a white suburb of Orlando, Florida. “There is opportunity here to make a better life for our family,” insists Eddie’s father, Louis (Randall Park), despite the skepticism and dismay of his uprooted wife and sons.

The show succeeds in many places where All-American Girl failed. All-American Girl suffered from a fundamentally pro-assimilation point of view that relied on mining the otherness of Korean culture for cheap laughs, particularly through the broadly stereotyped mother and grandmother characters. Cho’s teenage protagonist, Margaret Kim, with her white friends and “All-American” ways, served as a model of a minority “cool” enough not to be hung up on old-country traditions.

By contrast, Fresh Off the Boat largely subverts the white gaze, poking fun instead at the ignorance and blandness of white Americans and ‘90s white culture. The rollerblading neighborhood ladies who can’t stop saying “exotic” and the childish intolerance for different cuisines (shared by children and adults alike) are the punchlines here. It’s not the most sophisticated racial humor, but at a time when mainstream comedy continues to rely on racial stereotypes—witness the Asian schoolgirl jokes in the pilot episode of Seth McFarlane’s 2013 sitcom Dads, Saturday Night Live’s Taran Killam narrating a martial arts battle with a fake Asian accent or How I Met Your Mother putting white actors in yellowface—lampooning the racists instead of the racialized is a step in the right direction.

Still, Fresh Off the Boat struggles to portray a racial landscape that goes beyond the white/non-white binary. Young Eddie (Hudson Yang) is defined by his love of hip hop and black culture. While his parents sing along to Ace of Base and Bonnie Raitt, his internal soundtrack features Notorious B.I.G., Nas and Ol’ Dirty Bastard. “If you were an outsider, hip hop was your anthem, and I was definitely the black sheep of my family,” Eddie’s voiceover explains. Set just three years after the L.A. riots exposed deep divisions, resentment and anger between some blacks and Asians, the show’s relationship to hip hop needs to be more complicated than a facile equivalence between Asian and African-American outsider statuses.

Fresh Off the Boat does set up a complicated racial interaction in the pilot, when Eddie abandons the sole black student’s cafeteria table for the chance to buddy up with cool, Notorious B.I.G.-loving white kids, only to be rejected by the white kids for eating Chinese food. Walter, the black student, sees a chance to move one step up in the social hierarchy and calls Eddie a “Chink.” Eddie—who stayed calm in the face of a white kid’s taunts that “Ying Ming is eating worms”—loses his temper and fights Walter.

Here was a moment when Fresh Off the Boat could explore fascinating themes—whites’ and Asians’ simultaneous embrace of black culture and rejection of black people, the internecine battles between different communities of color—if it had the courage. Unfortunately, the pilot backs away from the complexities of the cafeteria encounter, taking refuge in a voiceover by Eddie that attempts to cast a hip hop sensibility on the classic immigrant narrative: “When you live in a Lunchables world, it’s not always easy being homemade Chinese food, but it’s also what makes you special. …. Because you don’t have to pretend to be someone else in order to belong. Like B.I.G. said, ‘If you don’t know, now you know.’ ” The monologue is a fortune-cookie ending to an authentic Chinese meal, and it leaves a dry taste.

The most exciting part of Fresh Off the Boat is Jessica Huang, Eddie’s mother, played by Constance Wu. Eddie assures us that his mother came “way before all that Tiger Mom stuff,” and while Jessica does check some stereotypical boxes—she insists on tutoring her sons for several hours after school because she’s worried they’re not being challenged, and bullies her husband about saving money—her character is richer and more individualized than we’re used to seeing in depictions of Asian women. She loves Stephen King and Pete Sampras, throws a mean fastball (using an onion) and mocks white American culture with a dry sense of humor.

Above all, Jessica is a seething ball of desire. She wants her children to strive, her husband to succeed and her neighbors to eat her stinky tofu. Her fierce desires drive much of the show’s plot and form its emotional core. This is the honest and unbridled want that lies at the heart of immigrant stories, prompting individuals to strike out in search of a life that is “more than okay,” as Louis says. If Fresh Off the Boat manages to develop the rest of its characters as successfully as it has Jessica, it has a chance of becoming “more than okay,” too.