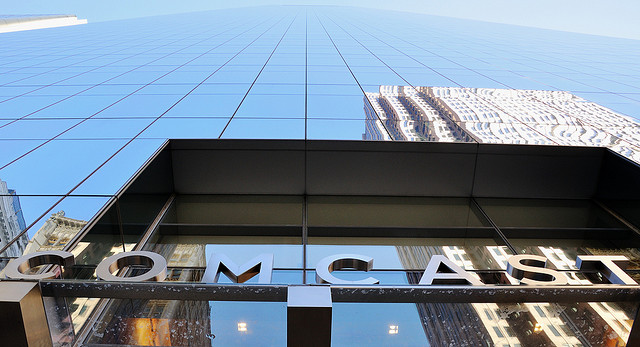 Records obtained by In These Times through a public records request reveal that, in its effort to persuade the FCC to approve its proposed mega-merger, Comcast drafted letters all the way up the state political food chain to the governorship.

On August 22, Neil Abercrombie, then Hawaii’s governor, sent a letter to Washington, D.C., urging the Federal Communications Commission to approve Comcast’s controversial proposal to merge with Time Warner Cable. In explaining the importance of what Comcast could bring to Hawaii’s future, the governor’s letter invoked the country’s recent recession and the state’s high number of families without Internet access.

“I have been impressed with Comcast and what it can offer the State, especially its Internet Essentials program, which offers discount Internet service to low income families,” the Democratic Governor’s letter asserted. “Your approval of this transaction should bring this needed service from the mainland to our shores.”

Yet the state of Hawaii did not give credit to one primary author of the letter: Comcast itself.

The first draft of the missive was sent from the Executive Director of Government Affairs at Comcast Cable. After receiving the original draft, the governor’s office—with help from a state regulatory agency—made mostly cosmetic changes to the Comcast PR document, added some language about a specific transaction involving Comcast’s proposed merger in the state, and sent it to Washington stamped with the state of Hawaii’s official seal.

Records obtained by In These Times through a public records request reveal that, in its effort to persuade the FCC to approve its proposed mega-merger, Comcast drafted letters all the way up the state political food chain to the governorship.

Last week, I reported in The Verge that Comcast had ghostwritten FCC letters for a spectrum of public servants—from a town councilman in Jupiter, Florida, to Oregon’s secretary of state—who had sent letters to Washington supporting the merger. In the case of Oregon, Secretary of State Kate Brown had received nearly $10,000 from Comcast in campaign donations in the years leading up to her FCC letter. Likewise, records show that just over a year before Neil Abercrombie submitted his letter to the FCC supporting the proposed merger, Comcast gave the governor a $6,000 campaign donation, the maximum yearly donation allowed in Hawaii for statewide candidates.

Other prominent officials who wrote letters to the FCC expressing support for the Comcast/Time Warner merger include Chicago Mayor Rahm Emanuel and the governors of Pennsylvania, North Carolina, Vermont, Maryland, and Colorado. Like those of Brown and Abercrombie, each one of these letters cites Comcast’s Internet Essentials program by name.

These letters of support could play a key role in one of the most important anti-trust proceedings in recent memory. Critics argue that, if approved, the proposed merger will create a monopoly that would give Comcast the sort of market power that could harm consumers on a variety of fronts including prices, customer service and the kinds of programming the company will allow people to access. Comcast argues that the merger will enable it to reduce its costs and give it a greater level of efficiency to make infrastructure investments.

“We reached out to policy makers, community leaders, business groups and others across the country to detail the public interest benefits of our transaction with Time Warner Cable,” said Comcast spokesperson Sena Fitzmaurice in an emailed statement. “When such leaders indicate they’d like to support our transaction in public filings, we’ve provided them with information on the transaction, in many cases at their request.  All filings are ultimately decided upon by the filers, not Comcast.”

The newly obtained records from Hawaii give a view into both collaboration and some apparent tension between the governor’s office and the regulatory agency charged with overseeing the state’s cable industry. In one email, a consumer affairs regulator at the Department of Commerce and Consumer Affairs (DCCA) pleads with the governor to “hold off” on sending his letter of support for Comcast’s merger to the FCC until after the state agency determines if and how the particularities of the proposed merger would play out there.

“A letter from the governor to the FCC at this time, would potentially undermine our negotiations with Comcast,” a DCCA official wrote to the governor’s deputy chief of staff on July 30.

But then just weeks later on August 22—well over a month before the DCCA made its own determination on the merger—the same regulator helped to edit Comcast’s draft letter that Governor Abercrombie would send to the FCC. The final letter the governor sent later that day largely kept intact Comcast’s glowing predictions about the potential of what the company might bring to Hawaii. (In August, Abercrombie also lost his bid for reelection to Democratic primary challenger David Ige.)

“The department’s Cable Television Division had initial concerns regarding the letter to the FCC,” the DCCA told In These Times in an emailed statement. “However, the department was able to provide feedback to the governor before the letter was issued.”

On September 12, a veteran lobbyist named Robert Toyofuku emailed the governor’s deputy chief of staff. Comcast was coming to town and the lobbyist was trying to wrangle a maximally private meeting area at Honolulu’s swanky Plaza Club for the Governor and Comcast officials to meet. Other than that Comcast wanted to “see the Gov and thank him for the letter,” the records do not make clear what the meeting regarded or why the lobbyist was involved.

Less than a month later, Hawaii’s state regulator gave its blessing, pending final approval from the FCC and Department of Justice, for the transfer of cable lines owned by Time Warner to Comcast.