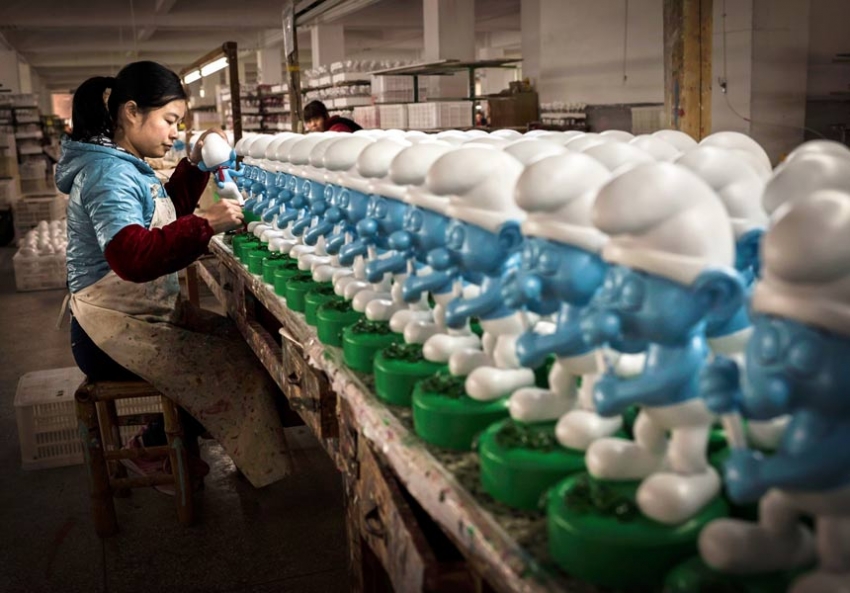 A Turning Point for Chinese Workers?

Amid a wave of strikes, hopes for lasting workplace reforms

The new militancy reflects the economic and social dislocations brought on in the last few decades with China’s embrace of a capitalist model of development.

As unions have struggled and strikes have declined in the United States in recent years, labor militancy has surged in other parts of the world—and nowhere more so than China. Since 2010, China has seen thousands of strikes and protests in a tide of collective action that shows no sign of ebbing. Between January 2011 and January 2015, nearly 2,900 strikes and protests occurred nationwide, almost half of them in 2014 alone, according to the Hong Kong-based NGO China Labour Bulletin (the Chinese government does not report national strike statistics).

In May 2010, 2,000 workers struck for 17 days at the Nanhai Honda auto transmission plant near Guangzhou. The landmark strike shut down delivery of parts to all Honda assembly plants in China and ultimately won wage hikes of up to 35 percent. A wave of worker actions has followed: One of the largest occurred in April 2014 in the industrial city of Dongguan, when tens of thousands of workers walked out at the Taiwanese-owned Yue Yuen shoe factory complex, maker of global brands like Nike and Reebok.

But protests are not limited to manufacturing; teachers, taxi drivers, sanitation workers and others have engaged in actions across the country. The new militancy reflects the economic and social dislocations brought on in the last few decades with China’s embrace of a capitalist model of development. Workers have suffered as the country’s authoritarian institutions have failed to stem increasing exploitation on the job.

The All-China Federation of Trade Unions (ACFTU) is the only legally recognized union, a vast Communist Party bureaucracy with more than a half-million full-time cadres. It is widely seen as an ineffective consultation body representing government and employer interests; at many enterprises, union offices are filled by company human-resource managers. All of the recent strikes have been initiated outside the ACFTU, but that has left workers without a broader organizational structure or coordination for their actions.

Now, however, the movement appears to be starting to achieve significant institutional reform. After years of legislative wrangling and stiff opposition from employers, last September the People’s Congress of Guangdong Province in South China passed groundbreaking new “Regulations on Collective Contracts for Enterprises,” which took effect in January. The new rules establish more democratic forms of union representation and a genuine system of collective bargaining.

The rise of militancy

For decades, China’s explosive economic growth was based on its ability to produce low-cost goods for export. This relied on a massive migration of cheap labor from the country to the cities: In Dongguan, almost 80 percent of its 8.3 million residents are migrants or their children. Under the government’s hukou or household registration system, migrant workers face discrimination in housing, education and welfare benefits, while earning less than 60 percent of the monthly wages of urban-born residents.

But as migration has begun to slow, labor markets are growing tighter andgiving workers more leverage—which the younger migrant generation is eager to use. Aided by access to a mobile Internet and a flowering of worker centers and labor-oriented NGOs, younger workers are more aware of their rights and less willing to accept conditions their elders endured.

Until recently, local authorities quickly suppressed rank-and-file worker uprisings, but the current wave has been met with an ambivalent tolerance. As it now tries to shift China from a low-wage to a consumer-led economy, the government knows it must deliver a more broad-based prosperity to raise purchasing power and preserve its own legitimacy. In a socialist country like China, “it’s an extremely unwise political choice to follow the labor policies of early capitalism to deal with labor conflicts and workers’ strikes,” Chang Kai, retired chair of labor studies at Renmin University and a legal advisor to the 2010 Honda strikers, wrote in a 2011 article in Caijing, a Chinese business magazine.

These pressures have led to a series of national labor law reforms to regulate employment contracts and resolve individual worker disputes. Local enforcement of the laws can vary greatly, however, and there is still no national law to enable real collective bargaining. Nor is there any national law to either protect or prohibit the right to strike, leaving strikes among the few ways workers can express collective grievances to management, local government or union officials.

A movement for reform

Yet changes are emerging. The new Guangdong regulations signal the openness of some provincial ACFTU leaders to the need for institutional reform. “[Union leaders] must represent the workers and not play the middleman,” said Chen Weiguang, former head of the Guangzhou Federation of Trade Unions, in a 2010 interview. “In the event of a strike, even very short ones, the trade unions have to be on the side of the workers.”

Under the new regulations, if at least 50 percent of a company’s employees support a demand for collective bargaining, the employer must respond to their proposals within 30 days. In addition, the regulations provide for democratic election of employee bargaining committee members, require employers to give worker representatives time off for negotiations and forbid management retaliation against them.

A key question, however, is the right to strike. The rules effectively ban strikes during negotiations; if bargaining reaches an impasse, they impose a form of mediation between higher levels of the union, business organizations and local government. Some activists doubt whether workers can truly exercise power in negotiations without a right to strike.

So far, the government has tolerated walkouts by workers making strictly economic demands, but remains hostile to independent labor organizations or any challenges to its authority. That includes the labor-oriented NGOs, long targets of government harassment. Activist groups have seen their leaders summoned for questioning and their office landlords pressured to shut off power or evict them. These crackdowns may be growing more violent: In December 2014, four unidentified men entered the Panyu Migrant Workers Center in Guangzhou and physically assaulted its director, Zeng Feiyang.

Meanwhile, with President Xi Jinping’s recent push for ideological discipline, Chinese universities have come under increasing Party scrutiny and control. But that did not prevent more than 120 Chinese labor scholars and practitioners from gathering in Beijing for a two-day conference in December 2014, joined by a small U.S. delegation (including the author) from the American Sociological Association’s section on labor and labor movements. The conference featured frank and intense debates on what many of the participants see as an historic juncture for China’s labor relations.

All signs suggest that the movement in China will continue to grow. Though Guangdong’s establishment of collective bargaining and democratic union representation are limited to the shop floor, they mark important steps forward. Elsewhere, including the Dalian Development Zone in northeast China, the restaurant industry in Hubei province and the sweater industry in Wenling, Zhejiang province, efforts to move to regional or sectoral bargaining have been explored.

With the current slowdown in the Chinese economy, workers are also expanding their demands to include retirement, unemployment and social benefits. The massive Yue Yuen shoe factory strike, for example, forced the company to make years of unpaid pension contributions. As these benefits are often administered through the government, such disputes may raise more openly political controversies.

All these factors make the current moment a crucial one for the Chinese labor movement. Guangdong is the “cutting edge place of Chinese industrial relations,” said Dr. Meng Quan, a labor scholar at the Capital University of Economics and Business in Beijing and a participant in the December conference. “The election of the workplace trade union will make a great difference on the effectiveness of collective bargaining in the factory.” Yet much still depends on workers’ ability to mobilize, he added, so “it is better for workers to learn how to conduct more collective actions.”

Chris Rhomberg is associate professor of sociology at Fordham University and the author of The Broken Table: The Detroit Newspaper Strike and the State of American Labor.