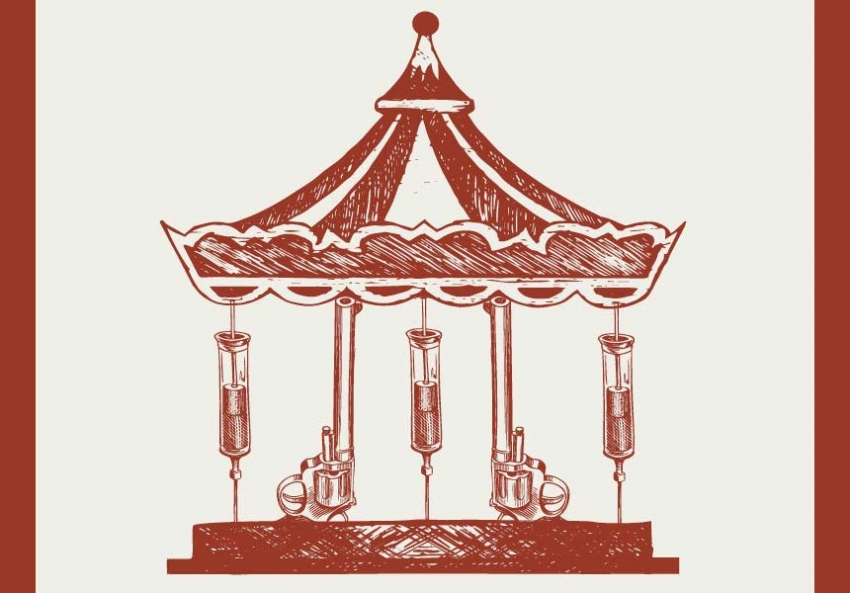 The scarcity of guns for purchase in New York and the lack of heroin in Vermont allows dealers to make a significant profit off of the lucrative gun-heroin carousel. (Rachel K. Dooley / Shutterstock)

The Vermont-New York Heroin-and-Guns Carousel That Can Make Dealers a 1,400% Profit

Gun-drug runners are carving a deep, two-way trench down the Northeast, leaving a toxic trail of violence, misery and addiction.

Pssst. Want an unregistered semi-automatic handgun, some heroin and a way to make a 1,400 percent profit?

First, the gun. In Vermont, you can legally buy it through a “private” sale at a gun show, yard sale, online or from a dealer. Doesn’t matter if you’re a convicted murderer with a history of mental illness and a restraining order for domestic abuse. Anyone 16 or older with $600 can, for example, go to Armslist.com and arrange with a “private party” in Arlington, Vt., to pick up a “Zastava M92 PV 7.62 x 39 cal. semi auto pistol that has a 10 inch barrel, comes with 2 each 30 round clips.” The Serbian assault weapon is, the ad notes, the “very cool … pistol version of the AK-47.”

Then, if you are willing to break the law, you can drive the weapon to New York, where semi-automatic handguns are banned, and sell it for triple the Vermont price. You can invest the $1,800 in heroin. Back in Vermont, where heroin is in relatively short supply, you can resell it for five times the New York cost and garner $9,000—a quick 1,400 percent profit.

Vermont is a gun lover’s free-market paradise. And anti-gun control advocates argue that because it has a golden triangle of virtues—loose gun laws, high gun ownership and a low crime rate—the famously safe, liberal state is proof that gun regulations are largely irrelevant to crime rates.

National Review writer Charles C. W. Cooke gleefully described Vermont as having “no gun laws at all,” and concluded that the state does “damage to the idea that there is an ironclad link between the availability of firearms and crime.”

And facts back him up.

FACT NO.1: Vermont has some of the loosest gun laws in the country. You can legally buy 50-caliber sniper rifles with scopes, sawed-off shotguns, semiautomatic pistols that can kill a moose, and armor-piercing bullets. No background check, no waiting period or limit on how many guns you can buy or own. You can use a false name and need no identification or registration. The magazine size is not restricted. And you can display the new gun on your hip or stuff it in your underpants for all the state cares. All legal. And as long as you “don’t know” the firearms will be used for criminal purposes, you can immediately resell the guns to a 21-year-old with racist insignias on his jacket, two prison escapees from upstate New York, a whacked-out drug dealer, a certified paranoid with a tinfoil hat, or a drunk 16-year-old (that’s the age to own a handgun without parental consent; there’s no age restriction on possessing a rifle or shotgun).

FACT NO.2: Vermont has consistently the first-or second-lowest per capita murder rate in the country. The state had only eight murders in 2012, only two of which related to firearms.

“And so we can absolutely say,” Cooke concludes, “a) an abundance of firearms and a set of loose regulations do not inevitably lead to more crime, and b) that the widespread suggestion that they do is dishonest.”

Hmmm, not exactly. Seeing the clear links between guns, violence and crime requires a more complex view of public safety and a few more facts.

FACT NO.3: We have seen that, like maple syrup, firearms cross state lines. One makes your pancakes delicious, the other fuels crime and murder. “Firearm traffickers travel to Vermont for the purchase of firearms from unlicensed sources and then travel back to more restrictive states,” Massachusetts Bureau of Alcohol, Tobacco, Firearms and Explosives (ATF) Special Agent Christopher J. Arone tells In These Times. Vermont exports more guns per capita than any other New England state and ranks 16th nationwide. Hundreds of crime-linked guns originally purchased there have been recovered by out-of-state law enforcement.

FACT NO.4: Vermont’s export of guns is neatly paired with its imports of heroin. “ATF offices in Vermont and Springfield, Mass., have consistently seen guns originating in Vermont used as currency in the interstate drug trade,” Massachusetts ATF Agent Debora Seifert told the Boston Globe in April 2014.

“It’s not so much just firearms trafficking to make a profit [off the guns themselves],” Vermont ATF Agent Jim Mostyn told Vermont Public Radio in 2014. “What we’re seeing is the narcotics for the guns. Most of the firearms trafficking, if not all, has a nexus to narcotics.”

FACT NO.5: Vermont is in the midst of a heroin epidemic. With more than $2 million in heroin and other opiates flooding in every week, the state has the country’s second highest per capita use of illicit drugs, excluding marijuana. Heroin-related deaths in Vermont nearly doubled between 2012 and 2013 and there was a 770 percent rise in the number of people treated for addiction between 2000 and 2014.

Turns out, capitalism hasn’t changed all that much in 300 years. The  interstate gun-drug merry-go-round bears more than a passing resemblance to the British East India Company’s lucrative 18th-century trade route: Purchase opium in India, trade it in China for tea, sell the tea in England, and use the profits to buy more opium.

The rest of the story

Today’s gun industry earns billions of dollars a year from consumer sales and then funnels tens of millions into the coffers of the NRA, which lobbies hard against gun control. Although federally licensed gun shops across the country impose some hard-won standards (government-issued photo IDs, limits on firepower, background checks, etc.), consumers with a criminal record or other disqualifiers can illegally skirt these impediments by using a straw buyer—a proxy with a clean record. Or, like Dylann Roof, who is accused of murdering nine people in a black South Carolina church, they can slip through a flawed bureaucracy. Having admitted drug possession, Roof should have failed his background check and been barred from legally buying the gun used in the attack.

Or like the myriad gun buyers wanting to avoid federally licensed shops, they can travel from states like New York or Massachusetts (with stricter-than-federal regs) to those where restrictions are virtually nonexistent. “When dealing with firearms trafficking, it’s ‘source’ versus ‘market’ states,” says ATF Agent Arone. “The source areas and their non-restrictive firearm laws make the purchasing of firearms easier versus more restrictive states. It’s as simple as that.”

So, where better to shop than Vermont? The only problem is that the laid-back populace and pleasant landscape seem to lull some traffickers into such dizzying stupidity that they speed in cars cop-baited with busted taillights. Like the Brooklynites clocked at 109 miles per hour on Interstate 91 at 12:30 a.m. while hauling cocaine, heroin and 1,200 glassine bags. Or the genius with the cracked windshield who stashed 740 one-dose bags of heroin in a deflated spare tire that didn’t fit his car.

Darwinian culling aside, gun-drug runners are carving a deep, two-way trench down the Northeast—and, like the East India Company before them, leaving a toxic trail of violence, misery and addiction.

The literal trail is Interstate 89 and Interstate 91, which bracket the length of Vermont. They carry milk and cheese from organic farms to trendy city shops, Heady Topper beer to hipsters, tourists to scenes of pastoral beauty, and drug and gun runners high on dreams of big profits.

I-91, which connects to key stations in the illegal circuit—New York City and the hardscrabble Massachusetts towns of Springfield and Holyoke—has been dubbed the Iron Pipeline. It joins up with Vermont’s other main northsouth route, I-89, which passes through Barre, the former “granite capital of the world” that was once famous for union struggles and colorful in-fighting between the anarchists and socialists who worked its extensive stone quarries and carving sheds. Today, Barre, like much of Vermont, struggles with drug abuse rates that owe much to the interstate gun-drug circle.

The NRA and the National Review’s simplistic arguments notwithstanding, Vermont is actually an example of the complex and extensive web of social costs that flow from the barrel of unregulated guns. In an average year, roughly 100,000 Americans are killed or wounded with firearms; an uncountable number are destroyed by the trade in illegal drugs linked to guns.

Turns out guns do kill people, especially when joined in lethal synergy with the lures of heroin and profit.