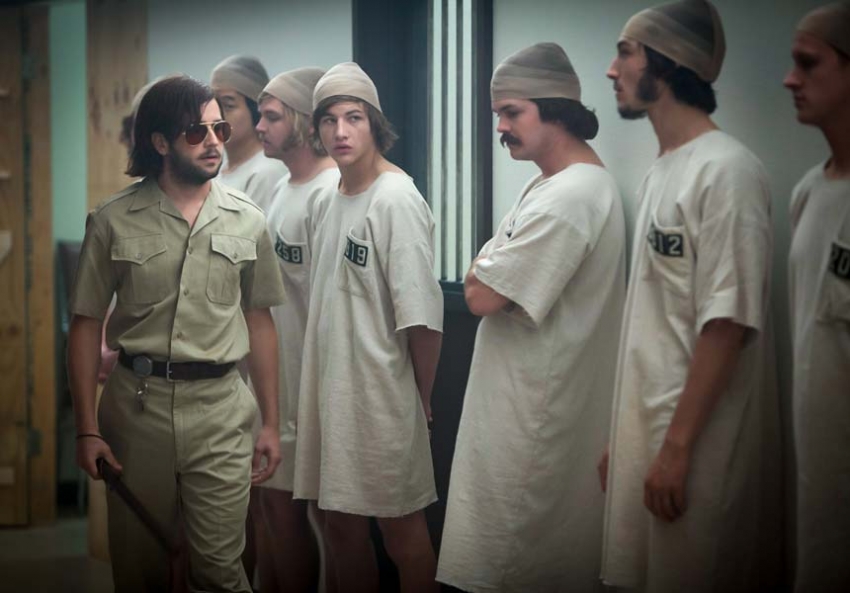 A 'guard' in The Stanford Prison Experiment intimidates 'prisoners.' (Courtesy of IFC Films)

The film adaptation of the Stanford prison experiment explores little of its ambiguity.

The most startling part of the film’s methodical re-creation is the way the prisoners succumb to authority from the outset.

Kyle Patrick Alvarez’s The Stanford Prison Experiment is a grim slog of a film, but it capitalizes effectively on the morbid fascination the 1971 study has always inspired.

The experiment, conducted by Professor Philip Zimbardo and his research team, involved a group of “normal” male Stanford University students who were randomly assigned roles as “prisoners” or “guards.” They agreed to enact a prison simulation in the basement of the psychology department. Designed to last up to two weeks, the experiment was terminated at the end of six days, by which time the gleeful guards were abusing their authority in shocking ways and the hollow-eyed prisoners were enduring it with zombie-like passivity.

The most startling part of the film’s methodical re-creation is the way the prisoners succumb to authority from the outset. Not knowing when the experiment will start, and never briefed about the procedures, they are arrested without warning at their homes, driven to Stanford and instructed by the guards to strip. Seeing the first student hesitate, protest mildly and then swiftly cooperate—at which point he’s sprayed all over with disinfectant—was more shocking than a lot of what comes later.

By the second day, the traumatized prisoners are mounting ragged rebellions, and the guards are cracking down with escalating physical force and sadistic inventiveness.

When a member of the research team asks Zimbardo if it’s time to step in, Zimbardo replies: “No. Let the guards figure it out, let’s see where it goes—”

“This IS where it goes!” replies the researcher, in a moment of meta-commentary by the screenwriters.

As played by Billy Crudup, Zimbardo is a modern monster, an avid, obtuse careerist who can’t or won’t recognize his own self-serving complicity in the abuse until the sixth day, long after his experiment has descended into Lord of the Flies.

Crudup’s portrayal resonates uneasily with the fact of the real Zimbardo’s current status as a professor emeritus at Stanford and his illustrious postexperiment career, including a stint as the president of the American Psychological Association. Zimbardo’s been dining out on the Stanford prison experiment for decades, having suffered no consequences from the conceptually flawed, badly regulated and, one would assume, legally actionable study. On the contrary, Zimbardo’s career has consistently benefited from its infamy. For example, Zimbardo billed his 2007 book, The Lucifer Effect: How Good People Turn Evil (on which the film is based), as “the full story behind the Stanford prison experiment, a now-classic study I conducted in 1971.”

It’s so “classic” that, in training courses on human subject research, it is almost invariably cited as an egregious example of ethics violations. The Hippocratic Maxim, “First, do no harm” is supposed to be a guiding principle.

It’s strange to find a title card at the end of the film assuring us that “extensive interviews conducted by the researchers determined that none of the participants were permanently harmed or suffered any long term effects.” Are we supposed to laugh out loud at that point? I did, anyway. And subsequent “interviews” with the characters—seemingly based on Zimbardo’s actual exit interviews—undercut the noharm claim. The first interviewee says, “This whole experience harms me.”

The film explores the dubious contrivances of the research team that designed and conducted the actual experiment, which have been previously underreported, as Maria Konnikova attests in a recent New Yorker article, “The Real Lesson of the Stanford Prison Experiment.” She argues that the lesson commonly taken from the experiment is that “with a little nudge, we could all become tyrants.” But this is erroneous, she says, in part because of the way the human subjects were manipulated to act in a certain way, especially the guards. From the beginning, their roles were crafted as tough, sadistic prison guards literally right out of a movie. They were issued uniforms that included whistles, nightsticks and mirrored sunglasses inspired by the scary head prison guard “the man with no eyes” in the Southern chain gang film Cool Hand Luke. In The Stanford Prison Experiment, we see one of the main guards, played by Michael Angarado, do a credible imitation of Strother Martin’s vicious “Captain” character, clearly using the despotic prison warden as the model for his own conduct.

In addition, according to Konnikova, the participants’ actual behavior during the experiment was far more complex than is generally known (or represented in the film). Only about a third of the guards, for example—that is, four of the students—engaged in the abuse.

The implications of the experiment are highly ambiguous, and the film explores only some of that ambiguity, while mainly sticking with the broadstroke lesson that “with a little nudge” we could all become tyrants, or slaves to tyranny, literally overnight.

The film plays longer than its 122 minutes, but it’s likely to be a draw for the kind of independent film viewer who loves to watch exercises in bleakness, evocatively shot, and then announce, “It really makes you think.”

But before you start thinking, I suggest you read up on the actual Stanford prison experiment.