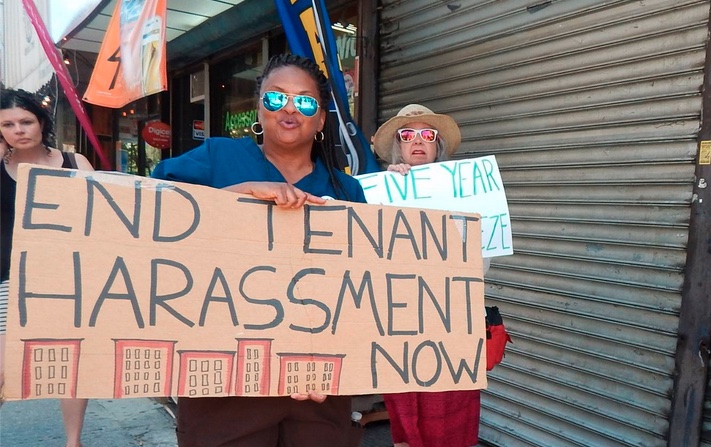 For the past two years, the Crown Heights Tenant Union of Brooklyn has used collective bargaining strategies to win victories around rent control and tenant protection laws.

Instead of depending on unreliable government officials to defend them, CHTU has decided to push for collective bargaining agreements between tenants and landlords that would write protections for tenants directly into the deeds of rented buildings.

This is an expanded verison of the story that ran in the September issue of In These Times.

The past two months have been a roller-coaster ride for affordable housing activists in New York. Despite a fight over the renewal of state rent regulations that ended in an unsatisfying stalemate between landlords and renter advocates, activists won an unprecedented rent freeze for all rent-stabilized apartments with one-year leases in New York City from Mayor de Blasio’s Rental Guidelines Board just one week later, raising hopes for future victories.

But one group of organizers, based in the rapidly gentrifying Brooklyn neighborhood of Crown Heights, sees better prospects for change outside of the developer-friendly state capital. They've decided that the problem with affordable housing is not necessarily that tenant laws aren't strong enough—New York has some of the strongest housing regulations in the country—it's that tenants lack the power to ensure that the law is enforced. The Crown Heights Tenant Union (CHTU) is exactly what its name implies—a union in the Brooklyn neighborhood of Crown Heights based around an organizing model adapted from the labor movement. Instead of depending on unreliable government officials to defend them, CHTU has decided to push for collective bargaining agreements between tenants and landlords that would write protections for tenants directly into the deeds of rented buildings.

CHTU’s ultimate goal is to negotiate a neighborhood-wide contract between landlords and tenants that would regulate future rent increases (and impose a five-year rent freeze on all units), codify standards on repairs and renovations, guarantee automatic lease renewals and protect tenants from displacement and harassment, putting the brakes on skyrocketing rents that have forced many long-time residents to leave the neighborhood.

“The landlords are so powerful politically that we felt we had to confront them directly if we wanted to get real concessions, and the only thing that is truly binding is a contract,” says Joel Feingold, an Occupy veteran who helped found the group in October 2013.

That's just one of many reasons why CHTU is so unique. Few other groups in the United States are using this strategy, save for City Life/Vida Urbana, an affordable-housing group in Boston, pushed for collectively bargained “affordability agreements” in the mid-2000s, winning housing subsidies and limits on rent increases in more than 40 buildings. Tenant unions are commonplace, however, in countries like Sweden, where they form the backbone of tenant-friendly housing regulations.

This model has helped CHTU build an alliance between old and new residents that lies at the heart of its organizing strategy. While popular conceptions often paint gentrification as a clash between long-time residents of low-income communities and bespectacled hordes of invading hipsters, CHTU is premised on the idea that both groups have fundamentally shared interests.

“What is typically called ‘gentrification’ is actually a cycle of exploitation, where long-term working-class tenants in a neighborhood are pushed out, and then the same landlords turn around and overcharge—illegally, in many instances—the new tenants,” Feingold says. “Not only are there shared material interests, but both groups need each other to break that cycle.”

So far, CHTU has yet to successfully negotiate a contract for any of its buildings, but it’s come close. CHTU Local 2, which comprises four buildings owned by the private equity firm Burke Leighton, forced building management to the bargaining table after months of protests and legal action when the landlord “cut and ran” by selling off several buildings to another real estate firm, effectively ending negotiations.

That experience, says Feingold, was a watershed moment for the tenant union. Realizing that individual landlords could scuttle negotiations by selling off buildings and forcing tenants to start negotiations from scratch with the new landlord—a problem compounded by rampant speculation in the real estate market—CHTU has shifted its focus from negotiating with individual landlords to securing a collective bargaining agreement for the entire neighborhood. Toward that end, CHTU is launching a massive organizing campaign seeking to expand CHTU’s reach into nearly every rental unit in the neighborhood.

While this may seem like an ambitious goal, Feingold thinks the radically democratic structure of the tenant union will help make it possible. An organizing committee provides leadership on issues of strategy and organization, but ultimately all decision-making power lies in the hands of the rank and file, which discusses and votes on proposals during monthly meetings. These meetings also serve as spaces for education on both legal and practical issues: how to find your unit’s rent history and combat rent overcharge, how to write a press release, how to report a landlord for failing to make repairs, how to organize neighbors and more.

Roger Myers, a member of CHTU who has lived in Crown Heights for more than 40 years, says these trainings have been one of the group’s biggest successes, empowering residents to fight back against illegal evictions and other harassment tactics used by landlords to push out older residents in favor of more affluent newcomers willing to pay top dollar for an apartment in an up-and-coming Brooklyn neighborhood. In years past, he says, “We put up with all the killing and the violence. Now that the neighborhood is better, they want to take it from us.”

And for a long time, it seemed like “they” would. Over the past five years, new landlords, often backed by large Wall Street private equity firms, have flooded the neighborhood, buying up buildings and filling them with new residents who often pay three or four times the existing rent. To force old residents to leave, landlords sometimes resort to harassment campaigns and illegal tactics: refusing to cash rent checks, failing to make basic repairs, serving tenants phony eviction notices. Two years ago, Myers says his landlord changed the locks to the building and refused to give him or his mother (who lives with him) a new key, even threatening to have them arrested if they tried to break the locks. He had to take his landlord to court before he could finally get a new set of keys.

But now he thinks residents have a fighting chance. A campaign to report overdue repairs in his building led to a visit from the city inspector, educational efforts have helped tenants learn to navigate New York’s complicated housing bureaucracy and the landlord’s office has even become a little friendlier since the lawsuit.

“Now they realize we know what our rights are. Knowledge is power. If you know what you’re owed, it’s harder for them to take advantage of you. They have to take you seriously,” he says. “If I didn’t have that knowledge, I’d probably be out on my heels.”

While it’s too early to tell how this model will hold up in the long run, CHTU has already grown to encompass six active locals spread across two dozen buildings in less than two years of existence. Feingold sees this as a sign that the union model is able to gain residents’ trust, a crucial challenge for affordable housing groups across the country:

“We’ve grown through being very sincere about building a democratic, militant, tenant-led union movement in this neighborhood. We create victories in individual buildings that help us create a democratic tide of support. Solidarity works.”

This article originally stated that City Life/Vida Urbana has transitioned away from a collective bargaining strategy for tenants. While CL/VU has shifted some of its organizing to homeowners in foreclosure since the financial crisis, the group continues to organize tenants.