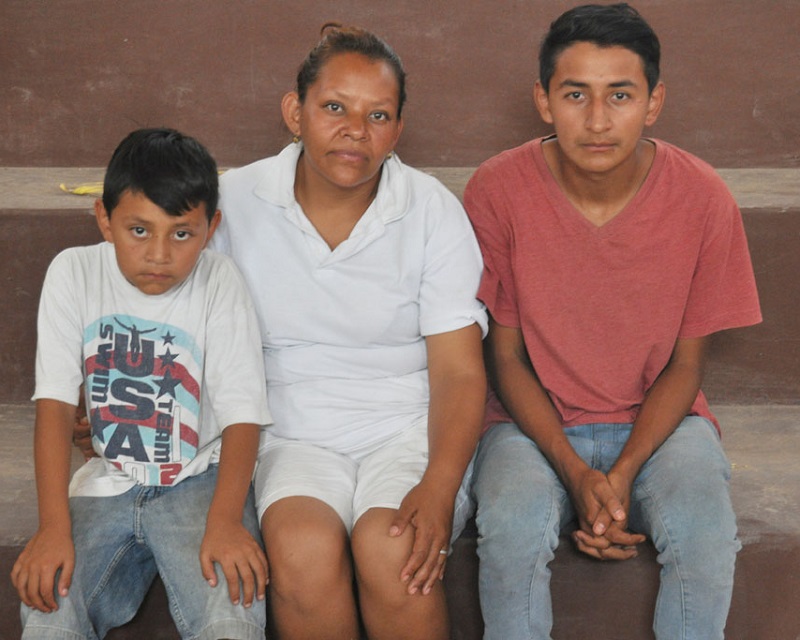 From left, José, Mónica and Herbert, Guatemalan migrants in a shelter in Ixtepec, Oaxaca, Mexico. Hoping to be granted asylum in the US, they will be placed in detention if they reach the US, since they travel as a family. They flee gang members who threatened to kill them if Herbert did not join the gang. (Photo by Joseph Sorrentino)

A California judge affirmed that it’s illegal to detain children—and ordered their mothers released, too

Judge Gee noted 'widespread and deplorable conditions' in the centers, including the 'overcrowded and unhygienic conditions of the holding cells.' The cells are small rooms that typically hold two families of up to eight people.

Last week, a federal court judge ruled that the Obama administration’s detention of Central American children violates a long-standing court agreement known as Flores. The federal settlement, reached in 1997, mandates that unaccompanied minors entering the US illegally must be placed in the least restrictive setting appropriate to the minor’s age and special needs, and released as quickly as possible.

In a decision long awaited by immigrant advocates, Judge Dolly M. Gee of the U.S. District Court for the Central District of California ruled on July 24 that the undocumented children arriving at the U.S. border shouldn’t be put in detention centers and those currently held there should be released as quickly as possible. But she went a step further: She also concluded that the mothers who are in detention should also be released unless they presented a flight risk or danger.

Immigration and Customs Enforcement (ICE) opened a family detention center in Karnes, Texas, in August 2014 and another in Dilley, Texas, in December 2014 to house mothers and children fleeing Central America. The centers are run by private contractors GEO Group and Corrections Corporation of America, respectively, both of which say that detainees have safe and clean environments and educational opportunities. But the centers quickly came under fire from advocates and attorneys.

“Conditions are horrendous,” says attorney Barbara Hines, a coordinating member of the RAICES/Karnes pro bono project, which provides legal counsel for detainees at both centers. Hines has worked to end family detention since 2006,when the Department of Homeland Security (DHS) opened a family detention facility in Taylor, Texas, and has worked extensively at Karnes since that center opened. “You have children in jail. [There were] allegations of sexual abuse, inadequate food, bugs in food, undrinkable water.”

In her ruling, Judge Gee noted “widespread and deplorable conditions” in the centers, including the “overcrowded and unhygienic conditions of the holding cells.” The cells are small rooms that typically hold two families of up to eight people.
The original Flores case was a lawsuit filed by attorneys at the Center for Human Rights and Constitutional Law on behalf of Jenny Lisette Flores, a 15-year-old from El Salvador who entered the US in 1985 seeking to reunite with an aunt. Flores was apprehended by the Immigration and Naturalization Service(the precursor to ICE) handcuffed, strip-searched and detained for two months.

Under the 1997 settlement, approved by a California federal court, unaccompanied minors could no longer be held in detention facilities. Instead, the court ruled they had to be “in facilities that are … consistent with the INS’s concern for the particular vulnerability of minors. Immigration officials must  release the minors within 72 hours to a guardian or adult relative, or placed in facilities licensed to house children.

Things worked well until last year, when a huge number of Central American refugees began entering the United States, spurring the Obama administration to ramp up efforts to detain and deport immigrant women and children. In the past year, the number of beds in family detention centers has increased thirtyfold.

In February, advocates went to court to argue that the new family detention centers violated the terms of Flores. ICE has maintained that Flores only applied to unaccompanied minors, not to minors who were accompanied by an adult, but advocates saw this as a false distinction.

Hines says she’s “delighted” with the ruling. DHS, under which ICE operates, didn’t have the same reaction.

“We are disappointed with the court’s decision and are reviewing it in consultation with the Department of Justice,” says Marsha Catron, DHS Press Secretary, in an email to In These Times. DHS has until August 3 to respond to the ruling and, according to Catron, they plan to do so. Judge Gee’s ruling instructs the administration to devise a plan to release detainees “without unnecessary delay,” but it could still appeal the ruling.
With the ruling released only a few days ago, some advocates expressed uncertainty as to what will happen and when. Hines isn’t one of them. “I think the results mean the end of family detention.”

This article was reported with support from the Fund for Investigative Journalism.