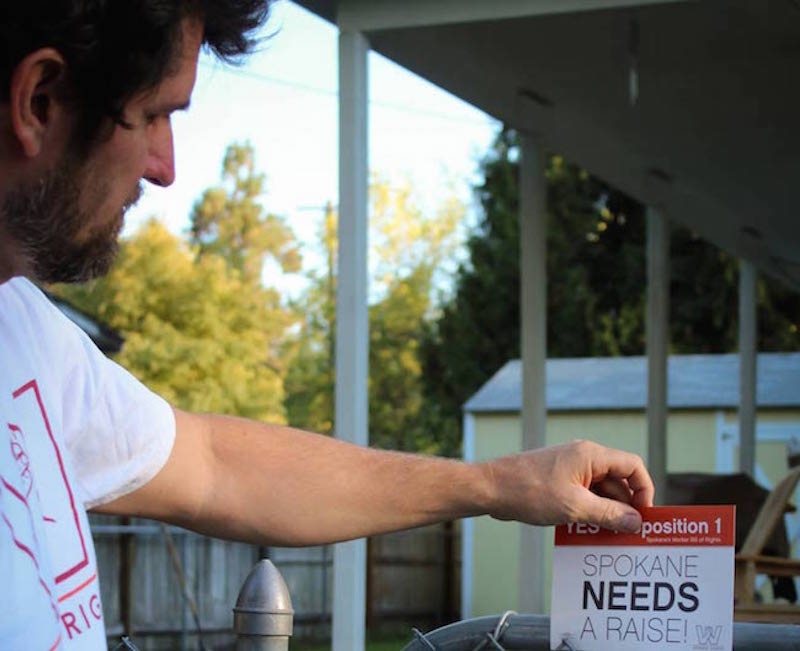 A Bill of Rights That Puts Workers Above Corporations

It’s up to the voters of Spokane, Washington.

Other than Montana, no state—nor the federal government—requires employers to give a 'just cause' for firings.

Ralph knows firsthand that non-unionized workers lack basic rights. Last year he got a text from his boss while at a cancer clinic in Spokane, Wash. After receiving chemotherapy treatment, Ralph learned he was being terminated from his job in the produce transportation industry—a decision his employer had no legal obligation to justify. According to Ralph, he was fired for “insubordination” after he began to question the business’s finances. Now, he’s been forced to take a minimum-wage job and file for bankruptcy, and could lose his home.

“I will not recover from this in my lifetime,” Ralph tells In These Times. “Tell me where the justice is in that.” (Ralph wished to remain pseudononymous because he is exploring filing a suit against his former employer, though lawyers have told him that he probably does not have a viable case.)

Workers without a union contract lack any guarantee of due process on the job, let alone a dignified wage. Other than Montana, no state—nor the federal government—requires employers to give a “just cause” for firings. But a movement in Spokane has gotten a first-in-the-nation Worker Bill of Rights on November’s ballot, which, if passed, would act as a kind of union contract for all workers in the city.

The proposition is being championed by Envision Spokane, a labor-community coalition. Envision Worker Rights, a sister political committee of the group, announced that it would introduce a new, worker-focused measure, and gathered more than 2,600 signatures to ensure its place on the city’s ballot.

Spokane’s Worker Bill of Rights would amend the city charter to provide several new on-the-job protections. It would give all Spokane workers rights to equal pay for equal work and to not be wrongfully terminated, as Ralph believes he was. It would also guarantee a “family wage” sufficient to cover basic necessities such as food, housing, utilities and childcare for workers of large employers. When employers run afoul, workers would be entitled to sue.

This may seem straightforward, but typically workers must hash out these protections through the arduous process of bargaining a union contract. Granting them proactively to all workers represents a promising new paradigm.

Thomas Linzey, executive director of the Community Environmental Legal Defense Fund, which is supporting the Worker Bill of Rights, explains that under current law, “in non-unionized, private workplaces, workers have no constitutional rights. It’s why e-mails can be read, urine can be tested, lockers searched. … By prohibiting firings without cause, due process constitutional rights would be afforded to all people working within the City of Spokane.” This departs from the “state-action” doctrine, the bedrock legal principle that the Constitution only protects citizens from the government, not from private entities.

When faced with efforts to protect workers and communities, corporations have often carped that their own rights are being violated. The International Franchise Association (IFA), for example, sued the City of Seattle over a $15 minimum-wage ordinance passed in June 2014, saying, among other things, that it discriminated against franchises and violated their constitutional right to equal protection. A U.S. appeals court ruled otherwise, and Spokane’s initiative is clearly not afraid of violating so-called corporate rights. The amendment declares that corporations “shall not be deemed to be ‘persons’ ” with legal rights if this interferes with the workers’ rights outlined in the measure. While Spokane is unlikely to reverse longstanding legal precedent on its own, advocates see the Worker Bill of Rights as part of a national movement to challenge corporate personhood.

This concept is resonating with many in the region and beyond. Some nine local unions and two regional labor councils have endorsed the initiative, along with community groups such as 15 Now Oregon and national figures like Noam Chomsky. Beth Thew, secretary-treasurer of the Spokane Regional Labor Council, the regional arm of the AFL-CIO, tells In These Times that the Worker Bill of Rights is “basically everything that organized labor stands for.” Given the decline in union density nationwide, she says, it makes sense “to take a more radical tactic.”

The list of backers also includes Democratic and Green Party-endorsed Spokane mayoral candidate Shar Lichty, the self-proclaimed “Bernie Sanders of Spokane.” Lichty acknowledges that “poverty is a huge issue here in Spokane”—more than 15 percent of residents live below the poverty line—and says she will defend the measure if elected.

As a result, Envision Spokane’s message is winning support from people like Ralph, who, though struggling to stay out of poverty himself, is phone banking for the campaign. “People today are just trying to fricking survive till the next day,” he tells In These Times.

The Worker Bill of Rights builds on Envision Spokane’s previous efforts to pass a Community Bill of Rights, which similarly challenged corporate personhood. The measure would have given neighborhoods power over local development and increased local environmental protections, among other provisions. First introduced on the ballot in 2009, the proposition failed to gain a majority of votes, and an updated version lost narrowly in 2011. The measure qualified again in 2013, but that vote has been delayed by a pre-election lawsuit brought by a coalition of county commissioners and business groups. The Washington Supreme Court will hear the case in November.

In August, the Worker Bill of Rights dodged a similar legal challenge, this time by Spokane’s own Republican Mayor David Condon, who sought to keep the measure off the ballot. The City of Spokane filed a lawsuit arguing, among other things, that the provision denying corporate personhood was unconstitutional because it would deny corporations access to the courts. A superior court judge ruled that the mayor did not have legal standing to keep the measure off of ballots, but city officials have persisted in their opposition. City Council members have also added controversial advisory questions about the potential costs of the initiative—whether, for example, the city should raise taxes to pay for it—that could sway voters against the measure.

“It’s about the rights of real people … taking precedence over corporations,” he says. “If we don’t start to chip away at this edifice that has been carefully crafted for over 200 years, then we’re screwed.”

Simon Davis-Cohen writes and makes films about criminal justice, local democracy, and the law. He does research and communications for the Community Environmental Legal Defense Fund. You can sign up for his nationwide “Ear to the Ground” newsletter— cataloging state legislation, grassroots news, legal developments, and local media—at: patreon.com/eartotheground.