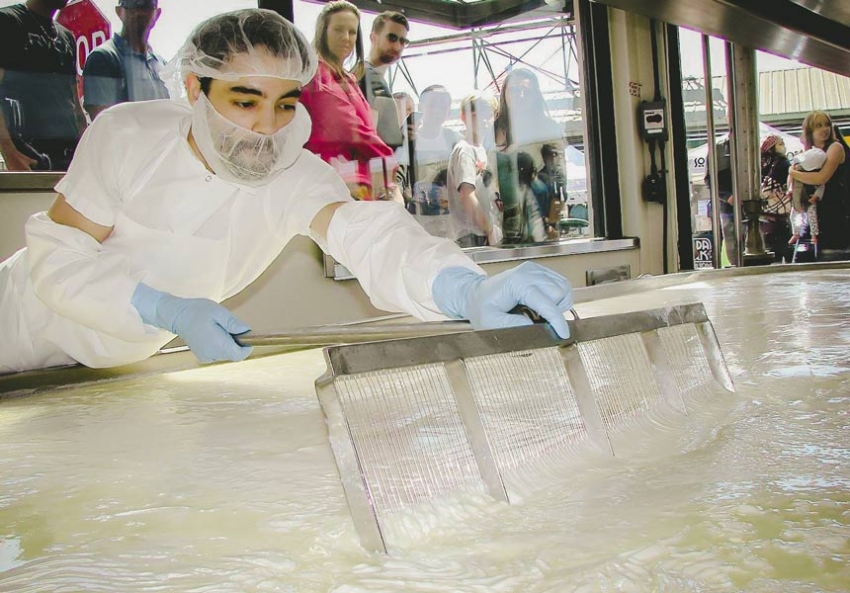 Seattle’s labor regulators are now under one roof.

Beecher’s Handmade Cheese, a cornerstone of Seattle’s Pike Place Market, claims (with good reason) that its penne mac and cheese is the finest in America. Dining at Beecher’s is a must.

Working there may be less advisable. Deric Cole, an Army vet, worked at Beecher’s for seven months, beginning in 2014. He says that turnover was so high that when he quit, he was a senior employee. Shifts varied from day to day, he adds, sometimes starting at 3 a.m. and occasionally lasting up to 15 hours. Cole says that while Beecher’s technically offered overtime, those who managed to accrue it were punished, and employees were even asked to work off the clock. Cole also alleges that Beecher’s ignored Seattle’s 2012 paid sick leave ordinance and refused to grant any paid time off for illness.

Fed up, Cole eventually brought these complaints to a new city agency designed to help in cases like his: the Office of Labor Standards (OLS), one of the first of its kind in the United States.

Over the past five years, Seattle has implemented sweeping labor laws, instituting paid sick leave, discouraging discrimination against those with prison records, incrementally raising the minimum wage to $15 by 2017 and strengthening wage-theft protections.

But these new laws can’t enforce themselves. One year after OLS’s creation, people like Cole will be among the first to test Seattle’s experiment. Although San Francisco originated the model over a decade ago, it has been slow to catch on. Seattle’s new endeavor could push other cities to adopt enforcement mechanisms for local labor laws.

Municipal labor laws are a recent phenomenon, too. In the 1990s, the living wage movement began winning ordinances that set wage floors for businesses receiving government contracts. In the early 2000s, cities like Santa Fe and San Francisco began setting their own minimum wages for businesses under their jurisdiction. A wave of municipal paid sick leave laws followed in cities like San Francisco and Washington, D.C.

Seattle joined the trend in 2011 with paid leave and an anti-wage-theft ordinance. In 2013, it passed “ban the box” legislation that restricts the use of criminal records in hiring procedures. In 2014, Mayor Ed Murray instituted the $15 minimum wage after a unionbacked ballot initiative campaign in nearby SeaTac, aided by the insurgent City Council campaign of socialist Kshama Sawant, pushed the policy to the center of the 2013 elections.

The enforcement of these new laws, however, has been lax. In 2014, Seattle’s auditor investigated the city’s Office of Civil Rights, tasked with enforcing the paid leave law, and found that investigations were defined by a “non-adversarial approach.” In 70 percent of cases reviewed, there was no proof that businesses changed their policies. In 2014, the Seattle Times reported three years after the anti-wage-theft law passed that it had led to no prosecutions.

That year, Seattle established the Labor Standards Advisory Group, composed of representatives from unions, businesses and community groups. Knowing the $15 minimum wage was soon to pass, group members agreed on the need for a centralized office to enforce new labor standards. OLS was born.

Still, “we are really focusing on highimpact enforcement,” says Karina Bull, senior policy analyst at OLS. For example, the agency often launches companywide investigations. “We want to make sure that we are using those four investigators as efficiently as possible,” explains Bull. “If we get a complaint from one person in a business with 500 employees, there are likely violations across that entire workforce.”

Currently, OLS has 81 open labor standards cases. The office has so far assessed a total of $213,000 in back pay and $1,350 in penalties from employers.

OLS also expands its reach by enlisting community groups to alert inspectors of workplace abuses. The groups are supported by a community fund, provided by the city, of $700,000 through August 2016. The money is shared by 10 organizations, including the NAACP, Chinese Information and Service Center, Casa Latina, Eritrean Association and the newly created Fair Work Center.

“For some folks there might not be as much trust [in a government agency], especially if they don’t have their papers,” says Nicole Vallestero Keenan, executive director of the Fair Work Center, which began taking cases in July. “We help people … so when they reach the investigators they have their information ready and accessible.”

Workers who approach OLS have the option to remain anonymous in their complaint, and most say yes. Investigators ask workers a comprehensive set of questions to identify any potential violations of Seattle’s labor ordinances. If OLS decides to investigate, the employer is given 10 days to provide payroll records and an employee roster, among other information.

The community groups also work to educate workers about their rights. Although municipal labor laws have caught the imaginations of labor activists and policy analysts across the nation, most workers remain unaware of the new standards in their cities. Cole says that neither he nor others who worked for Beecher’s knew much about Seattle’s worker protections. “[Beecher’s] always just told me you can’t take a sick day, or if you do you are not going to get paid for it,” says Cole. “I didn’t even know that was illegal.”

Beecher’s disputes these claims. Owner Kurt Dammeier tells In These Times that while cheesemaking is physically demanding, employees in Cole’s position stay for more than a year, on average, and that Beecher’s has provided a “great training ground” for the state’s growing artisanal cheese industry. He says that scheduled shifts for cheesemakers are not longer than 10 hours and that the company has paid out more than 1,600 hours of overtime to its cheesemakers thus far in 2015. He also denies that Beecher’s refuses employees paid sick time, stating that the company offers paid time off (PTO) to all employees and has paid out more than 1,000 hours of PTO to employees in the Cheesemaking department so far this year.

Cole thought about remaining anonymous when offered the choice by OLS. But now that he no longer works at Beecher’s, he feels he has nothing to lose. Winning back pay is a possibility, “but that’s not really the point,” he says. “It’s about making things better for the next people.”

Correction: This piece originally stated that Beecher's owner Kurt Dammeier told In These Times that the company has paid out more than $1,600 of overtime to employees so far in 2015. The actual figure given by Dammeier is 1,600 hours of overtime. The story has been corrected to reflect this, and to clarify Beecher's response regarding paid time off.