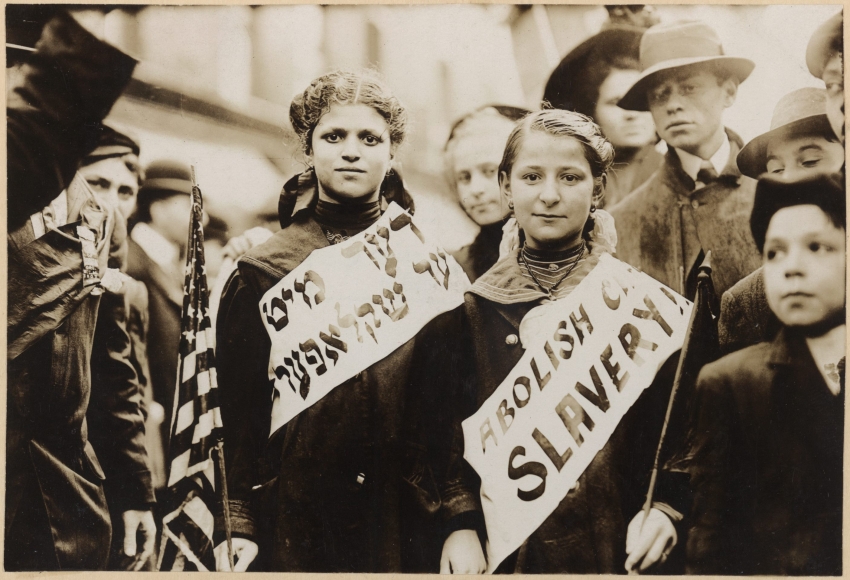 New York City garment workers at a May Day 1909 rally.

Jews Without Money: Toward a Class Politics of Anti-Zionism

Zionism began as class-oriented project within the Jewish community. Opposing it requires a class analysis of who benefits from Zionism within that community.

Jews should oppose Zionism out of a sense of solidarity with Palestinians, and out of a recognition that the Palestinian struggle is part of a larger global struggle against racial violence and indigenous land-displacement.

At the recent protest against the Jewish National Fund's Chicago meeting organized by Jewish Voice for Peace, I was immediately struck by the stark differences between the crowd of protesters assembled for a prayer vigil and the donors crossing Randolph Avenue for a catered reception. Both crowds were nearly all Jews; the vigil sang Shavua Tov and many of the donors wore kippot—both sides apparently locked in a cultural arms race for who most represented authentic Jewish life.

Yet for all the Hebed-out display, what struck me was not our shared culture, but rather the immediately apparent cultural differences. The JNF donors arrived in limousines and taxis (despite the conference hotel being only blocks away); they wore fur and expensive cocktail dresses; they sported the kind of even tans one wears as a fall accessory at a suburban country club. The crowd of singing Jewish protesters, by contrast, looked like social service workers, teachers, students—the ordinary, if educated, middle class.

This perception only intensified as I sat in the lobby of the conference hotel the next day, people-watching before the large demo. I overheard conversations about expensive vacations, and memberships on the boards of various non-profits. And saw pearls. Real, honest-to-God pearls.

Observing this division between the two crowds led me to wonder if perhaps we've missed an important element of the internal struggle within the U.S. Jewish community over Zionism. While a recent Pew study noted that Jewish American feelings about Israel change dramatically based on age and religiosity (younger and less religious Jews tend to identify less with Zionism), no correlations were made between one's income level and their views on Israel. Yet a recent Gallup poll at least leaned toward such an analysis, noting that white people with advanced degrees tended far more strongly to view Israel's bombing of Gaza as “justified” at a ratio of 2-1 compared with less well educated people, especially younger people of color.

While education, race and class are not objective correlatives, they do at least have strong layers of correspondence. We may like to imagine most people with MAs and PhDs are English professors and artists, but they are more likely engineers and MBAs working within industry and finance—if not the ruling elite, at least the top 1%. And this 1% seems far, far more likely to identify with even the most egregious and militaristic expressions of Zionism.

The idea of Zionism having a distinct class character is not by any means new. The Yiddishkeit revivalist Daniel Kahn recently translated and performed the 1930s song “O You Foolish Little Zionists,” in which a Jewish Bundist invites Zionist “fools” to “go down to the factory / and see the workers' reality,” as the immediate needs of Jewish workers would presumably cure the middle class Zionist of their nationalistic, utopian schemes. Radical Jewish writer Abram Leon, shortly before his murder by Nazis in the mid-1940s, argued that Zionism is a movement comprised by the Jewish “petite bourgeoisie” who refuse to see the connections between modern anti-Semitism and the crisis of Western capitalism. Posing anti-Semitism as a transcendent historical fact, rather than a product of European modernity, these small Jewish rentiers and business people can only respond with the “ideological fantasies” of their class.

And of course, there is the class nature of Israeli society itself. Far from being the classless utopia of the Kibbutzim, according an OECD report, Israel is one of the most unequal societies in the Western world, even among Jews. As Moshe Machover notes in his famous 1969 essay “The Class Character of Israel,” many of these class divisions within Israeli society are masked by both settler-colonial nationalism, as well as the externalized and racialized nature of the “threat” facing Israeli workers. Since the 1990s, this trend has been exacerbated by the shifting the already limited social welfare provision of Israeli society to the project of building more settlements—both exporting class divisions to the territories as well as sharpening the conflict between Jewish Israelis and Palestinians.

Yet the class nature of Israeli society does not alone explain why there might be a class division among American Jews along the lines of Zionism and anti-Zionism. As one can observe throughout the 20th century, anti-imperialist politics in the U.S. are decidedly domestic politics, from global analogies between anti-colonialism and Jim Crow in the Cold War era, to the linking of anti-fascism to anti-imperialism during the 1930s and 1940s, to the more present connections between neoliberalism and neoconservative foreign policy.  As economist Gerald Epstein argues in his 2003 paper, “Do U.S. Workers Gain from U.S. Imperialism,” U.S. workers face higher and more regressive taxes—as well as a shrinking social safety net—to pay for wars abroad, and U.S. workers lose doubly from lost jobs as a result of globalization. Epstein argues this wasn't always the case—U.S. workers in the 1950s and 1960s could expect higher wages from globalized firms that still employed a large number of unionized U.S. workers, and the tax burden of the military state fell more evenly on the shoulders of the elite, who paid a far higher marginal tax rate.

Israel is of course intricately and necessarily tied to the project of U.S. imperialism, both ideologically and practically. Whether running weapons to the Contras in Nicaragua, bombing Syrian nuclear reactors or assassinating Islamic radicals, Israel's military aid from the United States and their place within the calculations of the U.S. military go beyond just the normal tit-for-tat of a client state. Even the right-wing Zionist group FLAME now runs ads in The Nation magazine boasting of how Israel is the United States' “unsinkable aircraft carrier.”

In other words, Israel may be—and may have always been—the project largely of a Jewish elite. Yet Israel's militarism and general support for U.S. imperial projects represents the ongoing class project of U.S. empire abroad.

In the early 1930s, Mike Gold issued a challenge to U.S. Jews in his now-classic novel of the East Side tenement, Jews Without Money. It was not only issued as a corrective to the pernicious stereotype of the Jewish financier; it was also a call to Jews to align their interests with the growing labor movement of the 1930s. I would suggest progressive Jewish groups like Jewish Voice for Peace might also take a page from Gold's call: Jews should oppose Zionism out of a sense of solidarity with Palestinians, and out of a recognition that the Palestinian struggle is part of a larger global struggle against racial violence and indigenous land-displacement.

Yet there is also a class politics to this struggle. As teachers, social workers, as an ethnic group who has seen their rise to the middle-class coincide with—even depend on—the growth of the public sector in both education and social services, middle-class and working-class Jews have a material investment in not only cutting aid to Israel, but also challenging the militaristic imperialism for which it stands. And while Judith Butler revives the secular diasporic, anti-Zionist writings of Walter Benjamin and Hannah Arendt, it's important to be reminded that messianic narratives only take us so far in comprehending how and for whom power works. Zionism began as class-oriented project within the Jewish community, and opposing it requires a class analysis of who benefits from Zionism within that community.

At the end of the protest against the JNF this last week, I had sudden uncanny feeling that the anti-Zionist movement was more like other protests I'd attended as a labor organizer in years' past: we saw a small elite defending its privilege from a diverse group of working and middle class people taking to the streets. As education, social services, wages, and social security are slashed to pay for ever more wars in the Middle East, we must acknowledge that it is our moral duty to oppose the Israeli occupation—and it is also in our material interest.

Benjamin Balthaser is associate professor of multi-ethnic U.S. literature at Indiana University, South Bend. His book, Anti-Imperialist Modernism: Race and Transnational Radical Culture, was published from University of Michigan Press in December, 2015. His critical and creative writing has also appeared in American Quarterly, The Massachusetts Review Criticism and elsewhere. He is an active member of Jewish Voice for Peace-Chicago.