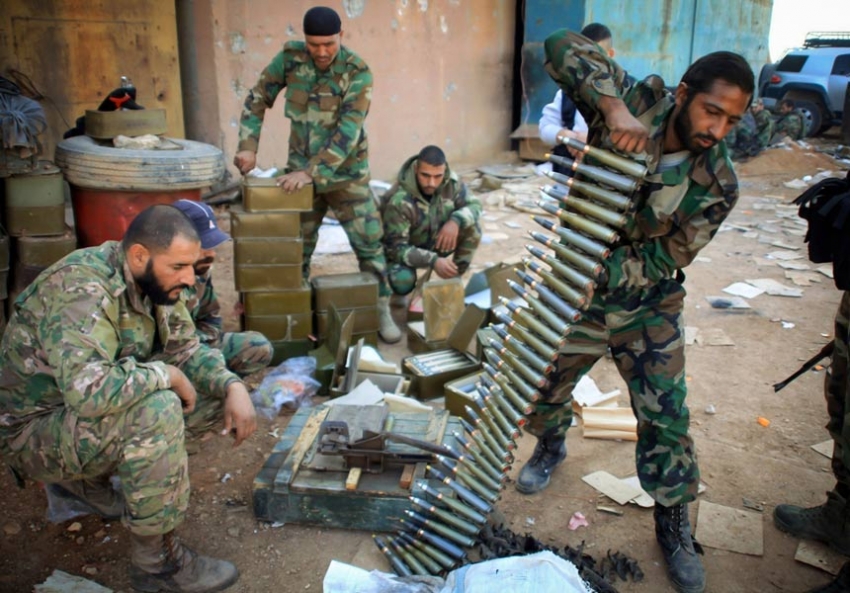 Bernie Is Right: The Military-Industrial Complex Is Alive and Well

For some, the Paris attacks were a windfall

During the last Democratic debate, the presidential candidates pledged to make defeating ISIS a priority. But more significant was the question raised by Bernie Sanders about front-runner Hillary Clinton’s corporate donors “from Wall Street, from the military-industrial complex” and “what they’re gonna get” for their money.

As long as we continue to allow corporate funding of candidates for high office, we will continue to have corporate-driven policies. Big Oil supports a strong U.S. military presence in the Middle East and North Africa to prop up repressive regimes that serve its interest and to stamp out democratic or nationalist governments that might seek to expel foreign investors and U.S. military bases. This fuels instability, anti-Western anger and terrorism. That terrorism, in turn, boosts profits for the military-industrial complex. The Paris attacks occurred on a Friday. When the markets opened on Monday, “defense” industry stocks—Boeing, Raytheon, Northrop Grumman, Lockheed Martin, General Dynamics, Booz Allen Hamilton—soared in anticipation of the coming weapons sales and security contracts. Any foreign policy with the potential to stabilize the region is bad for business and won’t get corporate backing, and thus won’t get a fair hearing in the Pentagon, the halls of Congress or the corporate press.

The results of policies that cater to Big Oil and the military-industrial complex come as no surprise. Since 9/11, five countries in the region—Afghanistan, Iraq, Libya, Syria and Yemen—have disintegrated as nation states. Three were the focus of direct American interventions. The fourth (Yemen) was destabilized by an American drone war. The fifth (Syria) suffered from the chaos and mayhem in neighboring Iraq and from a flood of U.S. arms to so-called moderate rebels.

Bernie Sanders, who has shunned corporate funding for his campaign, deserves credit for discussing our disastrous history of regime change. During the debate, in addition to Iraq, Sanders mentioned the 1953 CIA-initiated coup to overthrow Mohammad Mossadegh, the democratically elected leader of Iran, which caused untold suffering for the Iranian people and spurred decades of conflict between the United States and Iran. Sanders failed to mention that the coup was initiated for the direct benefit of Big Oil. (Mossadegh had nationalized Iran’s oil reserves in 1951.)

Sanders’ message is muddied by his support for regime change in Afghanistan, which resulted in a costly and bloody 13-year U.S. occupation that failed to weaken the Taliban, and has produced a flood of refugees and potential ISIS recruits. Why was it necessary, after 9/11, to obliterate the Taliban because they “harbored” terrorists, while leaving a regime in Saudi Arabia that funded that very same terrorism?

The disparity is easy to understand. The Saudi regime may be funding the enemies of the American people, but they are a friend to its corporations, and thus a reliable U.S. ally. Saudi Arabia is one of the largest buyers of U.S. weapons, which it is presently using to bomb its neighbor, Yemen. Again, on behalf of the arms industry, our leaders are ignoring evidence of Saudi war crimes in Yemen in order to ensure congressional support of a $1.29 billion arms sale (approved by the State Department the Monday after the Paris bombing) that includes thousands of “smart” and general-purpose bombs.

On top of which we have the puzzle of the National Security Agency and other spy agencies that receive tens of billions of dollars (their exact budgets are secret) to collect and analyze Americans’ personal data. Yet every large-scale terrorist attack from Bali to Madrid, London, Mumbai, Boston, Kenya, Paris and most recently, San Bernardino, comes as a complete surprise. Such failures are easy to understand. Corporate-driven policies favor lucrative contracts over demonstrated effectiveness. Thus, rather than hire a reasonable number of intelligence professionals to investigate actual threats, we hire for-profit corporations to collect the data, others to store it all in huge data warehouses, and still others to write and run algorithms to try and find the terrorists. The result is a bureaucratic morass of analysts drowning in data—and taxpayer dollars.

Until we can find a way to end the illicit union between corporate power and foreign policy, America will continue to play the dual roles of arsonist and fire brigade, and taxpayers will continue getting burned on both ends.

War Is an Enormous Threat to the Climate Movement