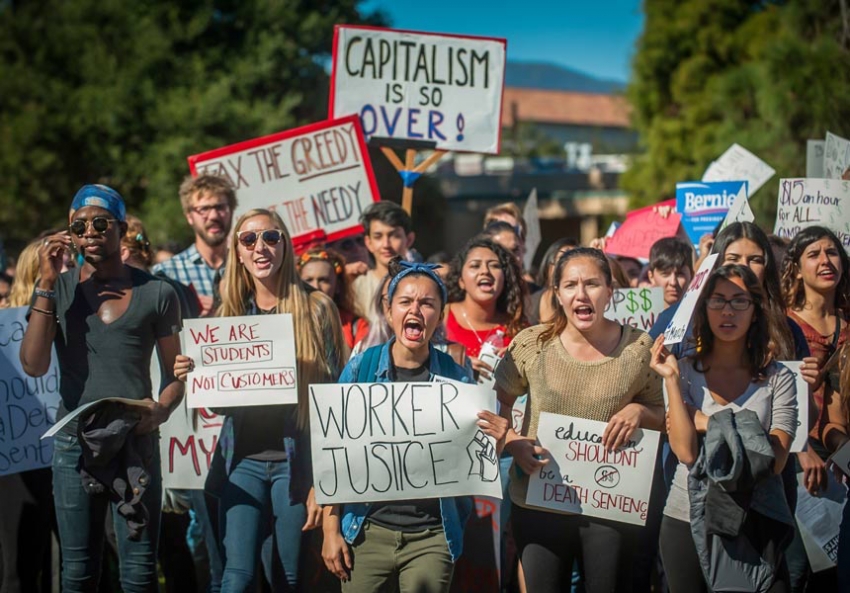 At last, real organizing for tuition-free college is taking off in America.

In the past three decades, average tuition at U.S. public universities has more than tripled.

On Nov. 12, 2015, students at the University of California, Berkeley, redecorated their idyllic campus with a “wall of shame.” On pieces of paper taped to the administration building, students proclaimed how much debt they had assumed in order to attend the prestigious university—for some, more than $160,000.

With chants of, “Free college: That’s our right. What do we do? Fight, fight, fight,” the students called for an increasingly popular solution to the growing burden of student debt: abolishing tuition entirely at public colleges and universities.

Throughout most of the 20th century, many public colleges and universities were free, or nearly so. California’s landmark 1960 Master Plan for Higher Education, for example, was essentially a pledge to educate all residents of the state who wanted an education for free or for a nominal fee. But the plan was soon attacked by Gov. Ronald Reagan, who painted free public higher education as welfare for privileged twenty-somethings and began shifting costs to students when he took office in 1967. Today, the total cost of tuition and fees at the state’s public University of California campuses stands at $12,240 for in-state residents. City University of New York (CUNY), likewise, didn’t begin charging tuition until 1976. It now costs $6,330 per year for in-state students, not including fees.

The idea of free higher education has gained new political life thanks in part to a high-profile champion. Sen. Bernie Sanders has made tuition-free college a signature issue of his presidential campaign, calling it the key to a “stronger economy and a stronger democracy.” Under Sanders’ plan, the federal government would cover the cost by imposing a financial transaction tax on Wall Street. Sanders has stressed that public universities are already tuition- free in Germany, Mexico and many other countries, and said in a June 2015 interview that he believed they could be free in the United States, as well, if a million young people marched in the streets to demand it.

Students rose to the challenge this fall, staging a Million Student March on Nov. 12, 2015 with demonstrations on more than 100 campuses. The protests centered on three demands: tuition-free public universities, a $15 minimum wage for all campus workers and cancellation of student debt.

In the past three decades, average tuition at U.S. public universities has more than tripled. The money has gone to offset deep cuts in state funding, but also to fuel a ballooning of administrations and state-of-the art campus facilities. Given that students have borne the brunt of these changes—average student debt at college graduation grew from $18,550 in 2004 to $28,950 in 2014—one might ask, why weren’t U.S. students flooding the streets sooner?

Places with far lower higher education costs have seen the rise of militant student movements opposing tuition hikes and privatization. In 2012, tens of thousands of students in Québec, Canada, boycotted classes and took to the streets in response to a proposal to raise university tuition. A province-wide student strike lasted more than 100 days—the longest in Québec’s history—and won a tuition freeze. Beginning in 2011, Chilean students held two years of mass protests, organizing hundreds of thousands of students through the Confederación de Estudiantes de Chile, a national coalition of student unions. In January 2015, the Chilean Congress passed a landmark law prohibiting state-subsidized schools and universities from operating as for- profits, but protesters continue to demand free education for all.

However, both Québec and Chile had long histories of student activism around affordable education, with coalitions that could mobilize students quickly across campuses. While U.S. colleges have historically been key battlegrounds for a range of social issues— sexual violence, international human rights, environmental justice, and most recently, racial justice—they lack the same tradition of student unionism. Organizing across geographically disparate campuses also presents a hurdle.

But student organizers from New York to California are rising to the challenge, led by CUNY and UC students who want to revive their schools’ missions to provide universal access to education. “Being able to build student power system-wide and even statewide is the place to start,” says Art Motta, a senior at UC Santa Cruz. The Million Student March was the first nationwide action; organizers came together from activist groups across the country via Facebook and conference calls. They are considering a follow-up in the spring. Although most organizing takes place on the campus or at the statewide level, there are a handful of national student organizations with members or chapters throughout the country. The largest, United States Student Association, focuses primarily on using its extensive network to push for legislative change, rather than mass direct actions.

Politicians are beginning to take notice of growing public support for the idea: Though she opposes Sanders’ plan for tuition-free college, Hillary Clinton has a $350 billion plan to reduce debt in higher education by cutting costs at public universities and expanding income-based loan repayment, among other measures. Clinton has also endorsed tuition-free community college, a proposal that is currently being pursued by President Obama, based on a policy in Tennessee.  And by joining forces with workers demanding a $15 minimum wage, students may be able to draw on the power of the labor movement. At the UC Berkeley march for tuition-free college, members of the California Nurses Association showed up in the hundreds to lend support.

To truly make higher education accessible to all, any plan will have to address not only its cost, but its history of segregation and exclusion of students of color, notes Daisy Villalobos, a junior at CUNY’s Hunter College. The two issues are far from separate: 42 percent of African-American families had student loans in 2013, compared to 24 percent of white families. And the debt protests have coincided with a wave of student protests highlighting other ways that institutional racism functions on campus. While the two student movements have only just begun to articulate their links, some campuses included racial justice in their Million Student March demands.

“I do believe that a student movement is growing,” Villalobos says. “But I think it’s going to have to be about changing what higher education looks like in America to better fit our needs as a nation.”