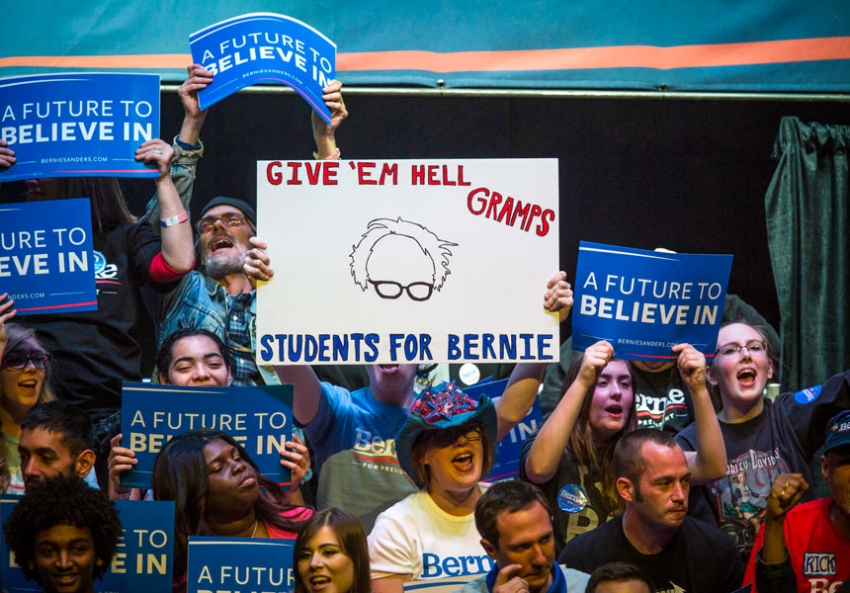 The 74-year old Sanders has proved to be the anti-greedy geezer.

So when Sanders says that “it’s time to make college tuition-free and debt-free,” that the big banks should be broken up, that health insurance is a human right, and that the minimum wage should be increased to $15 an hour, no wonder young people cheer for him, pack his rallies and donate to his cause.

How is it that a 74-year-old man has inspired the loyalty and devotion of thousands of twentysomethings? Aren’t millennials supposed to resent older people, seeing them as demanding “seniors” who have greedily attached themselves to the auricles and ventricles of every government-provided social service available and thus are gleefully and selfishly sucking their children and grandchildren dry? In 2012, former Republican Sen. Alan Simpson (then 81) infamously called older people “greedy geezers,” and numerous pundits have flogged this notion of generational warfare, with older people cast as the clear villains. Washington Post columnist Catherine Rampell, bemoaning college students’ “misdirected” activism around the need for more cultural sensitivity on campuses, suggested that young people focus on “one of the greatest injustices they face: the huge and growing intergenerational wealth transfers away from them and toward their parents and grandparents.” Insisting that “young people have been done wrong by their elders,” she deplored the “generous benefits that those older people have not paid for and never will.” Who will pick up the tab? Her answer: Millennials.

Another typical “warfare” story, in the conservative blog Hot Air, said older Americans are “content” to use their grandchildren as “ATMs.” So what gives with these same young people flocking in droves to the Sanders campaign?

Sanders has tapped into the overwhelming sense of injury, frustration and anger at the toll that market fundamentalism has exacted on Americans, especially the young. And in defiance of the “greedy geezer” stereotype, Sanders personifies the fact that older people—the parents and grandparents of millennials—actually care deeply about the financial struggles of young people and know something about the ravages of market fundamentalism themselves. During the Great Depression and the post-WWII period, there was a general acceptance that the state has a responsibility to mitigate inequality, provide basic services and even out capitalism’s boom-bust cycle.

Older Americans saw the dismantling of that acceptance and the rise of free-market fundamentalism. What followed was an era of “trickle down” economics, efforts to limit or eliminate the government’s role in redistributing wealth, tax cuts for the wealthy, deregulation of corporations and of finance, and widespread privatization of things the government used to run, such as schools, prisons and hospitals.

To justify this, the mantra of market fundamentalism glorifies individual responsibility as if it were a sacrament. We allegedly create our own circumstances by the choices we make. There are no structural, institutional obstacles that might thwart such choices, and thus, no need for any notion of collective responsibility or the common good.

Millennials have been hit especially hard by this ideological shift. The massive defunding of public universities and federal grants and loans has led to the tripling of student loan debt since the 1990s. More than three-quarters of renters between the ages of 18 and 24 spend more than they earn every month, and they are racking up credit card debt at a faster rate than other age groups. One in five twentysomethings have more credit card debt than savings, and the usurious interest rates and late fees are more burdensome when you’re just starting out. At least 8 million didn’t have health insurance as of 2014.

So when Sanders says that “it’s time to make college tuition-free and debt-free,” that the big banks should be broken up, that health insurance is a human right, and that the minimum wage should be increased to $15 an hour, no wonder young people cheer for him, pack his rallies and donate to his cause. He may have lost Super Tuesday, but he won the youth vote. His relentless focus on income inequality has constructed an intergenerational bridge around a wholesale rejection of a government by elites, for elites. One of his many great contributions during the campaign has been to show that such a bridge can be built.

As Hillary Clinton moves closer to the nomination, she ignores this lesson at her peril. At stake is the overthrow of this bankrupt ideology, and the need to celebrate Sanders’ vision of a social solidarity that puts the lie to media-promoted generational “wars” and unites the young and the old around an emphatic repudiation of market fundamentalism.