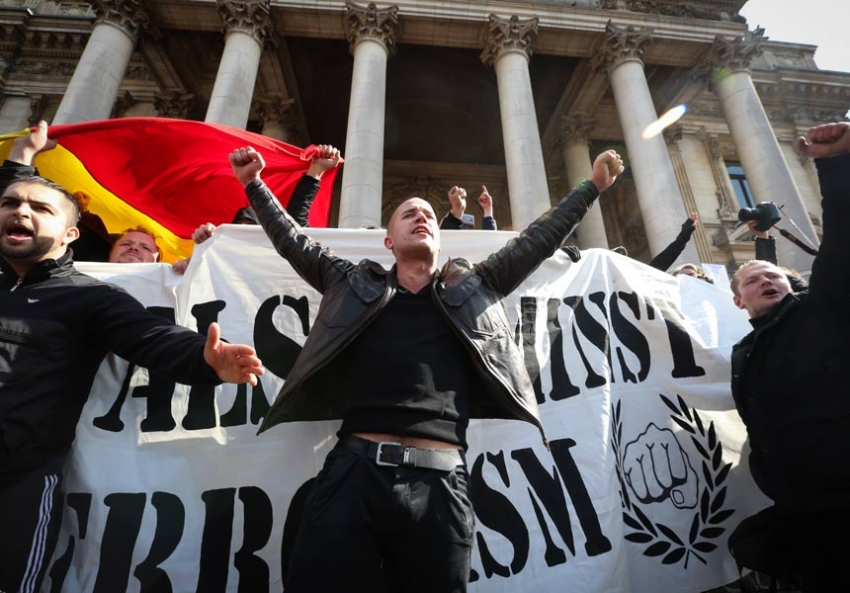 On March 27 in Brussels, nearly 200 far-right demonstrators disrupt a rally at a makeshift memorial to the victims of the terrorist attacks. (Patrik Stollarz / AFP / Getty Images)

The usual Left-liberal critique of the European Union is that it’s basically okay, just with a ‘democracy deficit.’

Sometimes faces become symbols of the anonymous forces behind them. Was not the stupidly smiling face of Eurogroup President Jeroen Dijsselbloem the symbol of the European Union’s brutal pressure on Greece? Recently, the Transatlantic Trade & Investment Partnership (TTIP)—the European cousin of the Trans-Pacific Partnership—acquired a new symbol: the cold face of E.U. trade commissioner Cecilia Malmström, who responded to massive public opposition to TTIP this way: “I do not take my mandate from the European people.”

Now a third such symbol has emerged: Frans Timmermans, the first vice president of the European Commission, who, on Dec. 23, 2015, scolded the Polish government for adopting a new law that subordinates Poland’s constitutional court to the authority of government. Timmermans also condemned the law that allows the Polish parliament to replace all executives at the country’s public television and radio companies. In an immediate rebuke, Polish nationalists warned Brussels “to exercise more restraint in instructing and cautioning the parliament and the government of a sovereign and democratic state.”

From the standard left-liberal view, it is inappropriate to put these three names into the same series: Dijsselbloem and Malmström personify the pressure of the Brussels bureaucrats (without democratic legitimization) on democratically elected governments, while Timmermans intervened to protect basic democratic institutions (judicial independence and a free press). It may appear obscene to compare the brutal neoliberal pressure on Greece with the justified criticism of Poland, but did the Polish government’s reaction not hit the mark? Timmermans did indeed pressure a democratically elected government of a sovereign state.

Recently, when I was answering questions from the readers of Süddeutsche Zeitung about the refugee crisis, the question that attracted the most attention concerned democracy—but with a right-wing populist twist. When Angela Merkel famously invited hundreds of thousands of refugees into Germany, what gave her the right? My point here is not to support anti-immigrant populists, but to point out the limits of democratic legitimization. The same goes for those who advocate the radical opening of the borders: Are they aware that, since our democracies are nation-state democracies, their demand equals a suspension of democracy—in other words, that a gigantic change should be allowed without democratic consultation?

We encounter here the old dilemma: What happens to democracy if the majority is inclined to vote for racist and sexist laws? It’s easy to imagine a democratized Europe with a much more engaged citizenry in which the majority of governments are formed by anti-immigrant populist parties. I am not afraid to conclude that emancipatory politics should not be bound a priori by formal-democratic procedures of legitimization.

Of course, no privileged political agent knows inherently what is best for the people and has the right to impose its decisions on the people against their will (as the Stalinist Communist Party did). However, when the will of the majoity clearly violates basic emancipatory freedoms, one has not only the right but also the duty to oppose that majority. This is not reason to despise democratic elections—only to insist that they are not per se an indication of Truth. As a rule, elections reflect the conventional wisdom determined by the hegemonic ideology.

Left critics of the European Union thus find themselves in a predicament: They deplore the “democracy deficit” of the European Union and propose plans to make the decision making in Brussels more transparent, but they support the “non-democratic” Brussels administrators when they exert pressure on democratically legitimized “fascist” tendencies. What lies behind this contradiction is the Big Bad Wolf of the European liberal Left: the threat of a new Fascism embodied in anti-immigrant right-wing populism. This strawman is perceived as the principal enemy against which we should all unite, from (whatever remains of) the radical Left to mainstream liberal democrats (including E.U. administrators like Timmermans). Europe is portrayed as a continent regressing toward a new Fascism that feeds on the paranoiac hatred and fear of the external ethnic-religious enemy (mostly Muslims). While this new fascism is dominant in some post-Communist East European countries (Hungary, Poland, etc.), it is getting stronger in many other E.U. countries where the view is that the Muslim refugee invasion poses a threat to European civilization.

But is this really fascism? The term is all too often used to avoid detailed analysis. The Dutch politician Pim Fortuyn, killed in early May 2002, two weeks before he was expected to gain one-fifth of the vote, was a paradoxical figure: a right-wing populist whose personal attributes and opinions (for the most part) were almost perfectly “politically correct”: He was gay, had good personal relations with many immigrants and possessed an innate sense of irony, etc.—in short, he was a good, tolerant liberal with regard to everything except his basic political stance. He opposed fundamentalist immigrants because of their lack of tolerance toward homosexuality, women’s rights, religious differences, etc. What he embodied was thus the intersection between rightist populism and liberal political correctness. Perhaps he had to die because he was living proof that the dichotomy between right-wing populism and liberal tolerance is a false one—that we are dealing with two sides of the same coin.

Many leftist liberals, like Jürgen Habermas, idealize a “democratic” European Union that never existed. Recent E.U. policy is nothing more than a desperate attempt to make Europe fit for global capitalism. The usual Left-liberal critique of the European Union—it’s basically okay, just with a “democracy deficit”—betrays the same naïveté as those critics of former-Communist countries who supported the Communists but bemoaned the lack of democracy. In both cases, the democracy deficit is a necessary part of the structure.

In a reference to the likely election of Syriza in Greece, in December 2014, the Financial Times published a column headlined: “Eurozone’s weakest link is the voters.” In the Pink Lady’s ideal world, Europe gets rid of this “weakest link” and experts gain the power to directly impose economic measures. If elections take place, their function is to confirm the consensus of experts.

As Eurocrat and former prime minister of Italy Mario Monti put it: “Those who govern must not allow themselves to be completely bound by parliamentarians.”

The only way to counteract the “democratic deficit” of global capitalism would be through some transnational entity. But the nation-state cannot serve as a democratic bulwark against global capitalism for two reasons: First, it is a priori in a weak position at a time when the economy functions as a global force; second, to do so, a sovereign nation-state is obliged to mobilize nationalist ideology and thus opens itself up to rightist populism. Poland and Hungary are today two such nationstates opposing globalization.

This brings us to what is the principal contradiction of global capitalism: Imposing a global political order that would correspond to a global capitalist economy is structurally impossible, and not because it is empirically difficult to organize global elections or to establish global institutions. The reason is that the global market is not a neutral, universal machine with the same rules for everybody. It requires a vast network of exceptions, violations of its own rules, extra-economic (military) interventions and so forth. So while our economy is more and more global, what is “repressed” from the anonymous global economy returns in politics: archaic fixations and particular (ethnic, religious, cultural) identities. This tension defines our predicament today: The global, free circulation of commodities is accompanied by growing social divisions. Commodities circulate more and more freely, but people are kept apart by new walls, from physical walls (such as in the West Bank and between the United States and Mexico) to reasserted ethnic and religious identities.

Does this mean that we should bypass the topic of democratizing Europe as a blind alley? On the contrary, it means that, precisely because of its central significance, we should approach it in a more radical way.

The problem is more substantial: How do we transform the basic coordinates of our social life, from our economy to our culture, so that democracy as free, collective decision-making becomes actual—not just a ritual of legitimizing decisions made elsewhere?