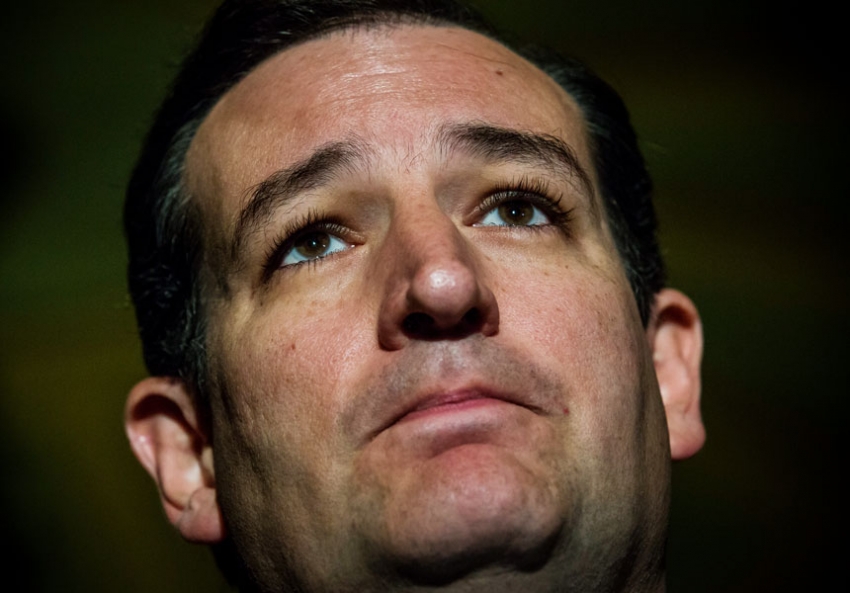 There’s no other way to put it: Ted Cruz is a dick. (Richard Ellis/Getty Images)

If no Senators, Republican or Democrat, like Ted Cruz, why should American voters?

It’s a real feat that Donald Trump is making the most hated man in the Senate seem an acceptable candidate by comparison.

He’s “a carnival barker” with “no qualifications,” says Rep. Peter King (R-N.Y.). “Lucifer in the flesh” and a “jackass,” says former Speaker John Boehner. A “wacko bird,” adds Sen. John McCain. “If you killed [him] on the floor of the Senate,” quipped Sen. Lindsey Graham, “and the trial was in the Senate, nobody could convict you.” Upon meeting him freshman week at college, a classmate “loathed him within the hour.” And in January, his college roommate tweeted, “Getting emails blaming me for not smothering Ted Cruz in his sleep in 1988. What kind of monster do you think I am? A really prescient one?”

It’s a real feat that Donald Trump is making the most hated man in the Senate seem an acceptable candidate by comparison. If you Google “Ted Cruz hated in the Senate,” you get more than 1 million results, with titles like “Is Ted Cruz Really an Awful, Terrible Jerk?” The answer seems to be a resounding yes. Cruz is despised for being a grandstanding egotist who trashes his own party (don’t forget he called Sen. Mitch McConnell a liar on the Senate floor). He is also loathed for his 21-hour anti-Obamacare speech that prompted a 16-day government shutdown. It nearly caused a national default, which led to the lowest approval ratings for the GOP in decades. The total economic cost of the shutdown was estimated to be anywhere between $12 billion and $24 billion. A former aide to McConnell likened it to “a toddler’s version of legislating.”

That some Republicans are holding their noses really, really tightly as they opt for Cruz over Trump is a sign of their desperation and their cynicism­—because there is reason to believe that Cruz would be an even bigger disaster than Trump. His policy positions are totally retrograde, misanthropic, racist, sexist, homophobic—and, well, dumb. His proposal of  “carpet bombing ISIS into oblivion” would be a war crime, and the military has already repudiated it. But he also doesn’t seem to understand what he’s saying, as he imagines you could “direct” or target such bombs, which is impossible. He calls climate change “not science, a religion,” opposes all subsidies to support renewable fuels, and wants greenhouse gases excluded from regulation.

On reproductive rights, he’s a nightmare. He favors strict limits on abortion and says that, if elected president, he would instruct his attorney general to “investigate Planned Parenthood on day one”; he claimed the organization sold the body parts of “unborn children” for profit (which is false) and that it should be prosecuted. He believes companies should have the right to deny women healthcare coverage for birth control. He opposes gay marriage, and after the Supreme Court legalization, said only the petitioning states had to abide by the ruling; all other states should ignore it. Because of this decision (which his preacher dad said Satan was behind), he wants to abolish lifetime appointment to the Supreme Court and subject the justices to periodic election, which would require an amendment to the Constitution. His campaign has said that the constitutional separation of church and state is “a myth,” and Cruz has proclaimed, “I’m a Christian first, I’m an American second.” This last prompted the satirical website FreeWoodPost.com to publish the fake news piece “Ted Cruz STUNS Crowd: When I’m President The Bible WILL Be The Constitution.”

Cruz proposes repealing corporate income taxes, eliminating payroll taxes for Social Security and Medicare, abolishing the IRS and imposing a flat income tax of 10 percent on everyone and 16 percent on consumption. This regressive plan would benefit the wealthiest and harm the poorest. And under it, the Tax Policy Center estimates that federal tax revenues would decline by $8.6 trillion—more than twice the annual U.S. budget—over a decade.

The only silver lining here is that because Cruz is such an obvious dick, with no track record of accomplishing anything in the Senate, he might not be able to get any of these things done, should he—by some remote chance—get elected. But as Republicans continue to freak out over Trump, let’s remember Lindsey Graham’s words of wisdom: Having to choose between these two is like choosing between “death by being shot or poisoning.” Cruz is just as ghastly a candidate as Trump and should be allowed nowhere near the White House.