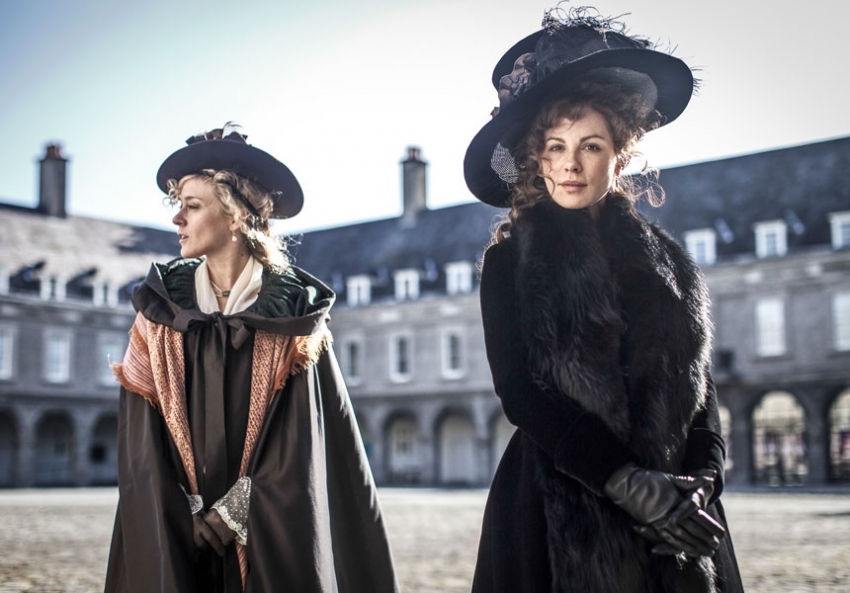 Susan stands alone as a blithe schemer, unapologetically out for what she can get in the genteel world of extraordinary hypocrisy that is Austen’s England.

At an April screening of Love & Friendship, a new adaptation of Jane Austen’s early epistolary novel, Lady Susan, director Whit Stillman explained to the audience that he aimed to emphasize “comedy over romance.” These are tidings of great joy for admirers of the English novelist, who have longed for the day when some canny filmmaker would decide to foreground her satirical wit, which is especially sharp when aimed at tangled issues of class and gender. It seems a shame that one of the most brilliantly ironic novelists of all time should be known foremost for the handy way her plots can be crammed into starchy period romances and airheaded romcoms.

Of course, fans enjoy watching the romantic adaptations of Austen novels, too—we’ll take what we can get. Oh, the thrilling combination of hot glances and cold courtesy! Screenwriter Andrew Davies began to sex up her novels for an increasingly appreciative public in 1995 when, in the beloved BBC-TV series version of Pride and Prejudice, he gave us an overheated Colin Firth as Mr. Darcy, emerging wet to the skin from a lovesick dive into a country pond. Since that first breakthrough in Austen erotica, film and TV adaptions have become a discreetly torrid stream of flirtation and fussy decor, exposed bosoms in closed carriages, and provocative banter timed to the stately beat of formal dances.

As does Lady Susan Vernon, our delightfully outrageous main character. Stillman’s Susan, though regarded as a “fiend” by members of the ruling class whose lavish households she disrupts, is presented with an almost worshipful glee. The camera finds every flattering angle from which to showcase her rhetorical mastery and astute ability to play social games to win. Her smooth manipulations allow her to bypass the restrictions placed on the lives of women without fortune, all while exposing the oppressiveness of this rule-bound system. While the quiet tyranny of social structures is a common theme in Austen’s novels, her heroines are generally virtuous and determined to marry for love, even if wryly aware of the pressure to marry for money. Susan stands alone as a blithe schemer, unapologetically out for what she can get in the genteel world of extraordinary hypocrisy that is Austen’s England.

Susan is portrayed by Kate Beckinsale, who was born to do period film roles set in England that require elegant good looks, crisp diction and bracing wit, such as the ones that began her career: Much Ado About Nothing, Cold Comfort Farm, and the title role in the 1995 A&E TV adaptation of Austen’s Emma. Now a sensational-looking 42, Beckinsale is the perfect age to play the lethally attractive “merry widow.” She plans to secure her own financial future by wedding her daughter to a rich, slaphappy dolt (a riot of a performance by Tom Bennett).

“But marriage is for one’s whole life!” protests the shy and squeamish daughter Frederica (Morfydd Clark).

“Not in my experience,” replies Susan. Her only true confidante is Alicia Johnson (Chloë Sevigny), a woman who shares her friend’s mercenary cleverness and has also married for money. Alicia’s husband (Stephen Fry) is determined to prevent her from continuing an alliance with the notorious Susan. In response to this high-handedness, Susan laments that Mr. Johnson is “too old to be governed and too young to die.” While her private scorn is directed primarily at easily manipulated men of rank, Susan’s disdain isn’t reserved for them entirely. She’s also dismissive of her milksop daughter and her personal maid Mrs. Cross (Kelly Campbell), a recently impoverished friend who will help with the “packing and unpacking.”

Whenever Mrs. Cross is mentioned, Susan hastens to add, “As she’s an old friend, the question of paying any wages would be insulting to us both.” Though a critique of this poor woman’s exploitation seems implicit, during a Q&A session following the film’s screening at the San Francisco Film Festival, Stillman claimed to have no intention of focusing on the servant class. He joked instead that Love & Friendship would further cement his reputation as a filmmaker who only deals with “upper-class twats.”

This remark points to a sore subject for many Austen fans: her apparent indifference to the working class. For all the revolutionary politics Austen scholars may discover lurking in her novels, it’s true that her eye rarely drifts below the concerns of middle-class characters. She wrings anxious effects out of the mere possibility that a gently bred woman such as Jane Fairfax in Emma, with no fortune of her own, may have to go to work as a governess.

Austen’s work does contain incisive social analysis, but of a particular kind. She’s a keen observer of the perils of social mobility—both upward and downward—of an expanding middle class. Historian David Spring suggests that the author’s own shaky position as a member of the British “pseudo-gentry,” the daughter of a clergyman who could mix among the upper classes, accounts for this. Such social climbing was becoming quite common in her day. Through money made in trade or the professions, and the mastering of upper-class manners and mores, people “of little consequence” were increasingly able to “pass” as gentry.

But just as one could ascend in status, one could descend with equal speed. Upon the death of her father, Austen found herself a spinster of straitened means, dependent on the charity of her prosperous, married brothers.

Love & Friendship contains a few small moments of near-seriousness that gesture to the economic angst of Austen’s women. Susan’s worldly aphorisms are funny, but they take on a dark undertone when she refers to the fact that she and her daughter literally have no place to live: “We visit.”

When Reginald (Xavier Samuel), Susan’s “calf-like” young lover and the eldest son of an aristocratic family due to inherit its fortune, holds forth about how shocking it is to sacrifice her daughter to a loveless marriage, Susan reminds him, “This is ease and comfort talking!”

But of course, Susan herself is by and large a case of “ease and comfort talking,” no matter how precarious her odyssey through the stately homes of England. We’re meant to love her for her trickster machinations in pursuit of wealth, status and personal pleasure, as Stillman clearly does. He even provides her with the happy ending that Austen denied her—a household arrangement satisfying her desires that is superficially respectable but courting scandal, just like the heroine.