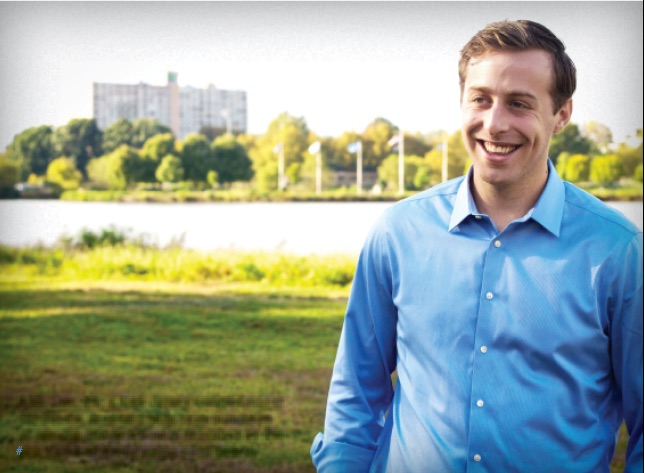 Mahler sees Law’s campaign as a model of how effective grassroots strategies can overcome funding disadvantages that many progressive candidates face. “We’re talking about races that aren’t about money,” he says.

When Bernie Sanders talks about the need for “political revolution,” he’s talking about building a government that’s responsive to the wants and needs of the American people, not the demands and interests of wealthy donors.

The problem, of course, is that without the support of such donors, it’s exceedingly difficult to get elected. In the 2014 midterm elections, candidates who outspent their opponents won in all but 28 of the 468 congressional races: a 94 percent success rate, up from 91 percent in 2012. And the ante keeps getting upped: Since 1998, each election cycle has cost more than the last, and 2016 is already on track to exceed a record $5 billion in campaign spending by candidates and outside groups, nearly double the amount spent in 2012.

But many progressive activists believe the huge and enthusiastic grassroots movement inspired by the Sanders campaign has created an opportunity to turn the tide. In many states, Sanders supporters organized canvassing, phone-banking and voter registration drives months before any paid staffers came to town. And that’s not to mention the legions of online supporters who helped get the word out about Sanders back when most Americans had never heard his name. Now, many of those supporters are looking for new ways to exercise their political voice.

One early hub for Sanders supporters was Reddit, one of the oldest and largest online message boards. Reddit is famous both for its use of direct democracy to determine which content gets promoted to larger audiences (any user can vote “up” or “down” on posts) and for its free-wheeling nature, embodied in the popular “Ask Me Anything” (AMA) threads in which anyone from a local plumber to the president of the United States answers questions about, well, anything.

In February, members of the 200,000-strong pro-Sanders Reddit sub-group began asking how they could find and support other candidates who shared Sanders’ vision. In response, a group of Redditors, led by web developer Jon Hughes and then-high school senior Ian Boyd, banded together to create Grassroots Select. Its leading organizers were political neophytes prior to Sanders’ campaign kickoff last May, but they’ve grown Grassroots Select into a budding political operation that’s already raised tens of thousands of dollars and recruited hundreds of volunteers for progressive candidates across the country.

The group’s research team seeks out and vets candidates based on viability and support for Sanders’ platform, though it errs on the side of inclusivity. Then, its campaign and social media teams help candidates tap into the broader online pro-Sanders community.

One of its first picks, in early April, was Alex Law, a 25-year-old relative unknown running for Congress in New Jersey’s 1st Congressional District. At first glance, Law looks like a long shot. Not only is he young and politically inexperienced, but his opponent in the Democratic primary, Donald Norcross, is an incumbent who also happens to be the brother of George Norcross, the head of South Jersey’s powerful Democratic machine. His opponent has outspent Law more than 20 to 1.

But Law has waged an aggressive electoral insurgency that’s brought him within striking distance. Law’s internal polling has the two candidates in a dead heat, and Norcross was rattled enough to agree to two online debates, a rare move for an incumbent.

Law’s unexpected momentum stems from a unique combination of technology and more traditional grassroots organizing. His campaign website features a digital phone-banking tool that allows volunteers, many of whom are recruited by Grassroots Select, to make calls from anywhere in the country. Grassroots Select has heavily promoted Law to its network of supporters, featuring Law on an AMA thread and raising more than $4,000 from 154 donors.

Helping candidates put together effective campaigns without deep-pocketed donors is a central part of Grassroots Select’s strategy. Though the organization does some fundraising, its main focus is connecting campaigns with skilled volunteers who can supplement the paid staff by building websites, conducting opposition research, planning campaign events, managing social media, field organizing and more.

This election cycle, Grassroots Select has supported about 40 candidates—mostly in congressional races, plus a few state legislative and gubernatorial elections. It plans to increase that number to 300 or 400 in 2018.

In addition to serving as a test case for Grassroots Select, Law is an example of how technology is allowing small campaigns to spend their limited resources more efficiently. A former IBM consultant, Law developed a dynamic computer model that allows him to target the most likely primary voters. In a district with fewer than 500,000 registered voters, and a state with a typical Democratic primary turnout of about 1 in 10, finding those voters is particularly important. Law has taken a two-pronged approach, tapping his base of younger supporters to find volunteers and focusing his voter outreach on older constituents (who are much more likely to vote). He’s recruited more than 1,000 local volunteers, who have helped him knock on 40,000 doors—10,000 by Law personally—over the course of the campaign.

Apart from winning the election, Law’s ultimate goal is to develop his algorithm into a model that can be adapted by grassroots campaigns across the country. He’s already worked with several campaigns, including Sanders’, to help them take advantage of the power of data analysis. His hope is that by allowing campaigns to focus on targeted face-to-face voter outreach, money will no longer be the deciding factor. “We’ve been priced out of our democracy,” he says. “We want to prove this concept that could open up the doors to democracy to so many more people.”

Mahler sees Law’s campaign as a model of how effective grassroots strategies can overcome funding disadvantages that many progressive candidates face. “We’re talking about races that aren’t about money,” he says. “They’re about finding the people who are likely supporters, getting in touch with them and building those connections.”

Jamie Raskin, a Maryland state senator, believes that such a participatory approach to politics is key to fighting back against the influence of money in politics. He would know, since in April he defeated eight opponents in the Democratic primary for Maryland’s 8th Congressional District, the most expensive congressional primary in U.S. history.

“Most consultants will tell you to go out and raise as much money as you can from rich people and give it to consultants to spend on TV,” he says. But according to Raskin, progressives running against better-funded opponents have little chance of winning with that strategy. His two best-funded opponents spent nearly $18 million on ads against him, far more than the $2 million his campaign raised and spent. Instead, Raskin invested his resources in winning the election “one living room at a time.”

Using social media and word of mouth, Raskin’s supporters organized nearly 170 small-scale campaign events in living rooms and backyards across his district. In the days leading up to an event, volunteers knocked on doors and blanketed the neighborhood with fliers. The goal, he says, was to emphasize face-to-face communication between community members and the political leaders that represent them. His opponents may have dominated the airwaves, but the personal connections he built with voters helped ensure turnout on Election Day.

Though Raskin admits his political ties from the state senate gave him an advantage unavailable to many progressive upstarts, he believes his success proves campaigns built on human connection can transform the political equation: “You don’t have to outspend big money. Public office is something that you earn. It’s not something that you buy.”

Money in politics isn’t going away anytime soon. But the success of candidates such as Raskin suggests that the grassroots energy unleashed by the Sanders campaign is here to stay, too.

“There are millions and millions of progressives across this country,” Mahler notes. “If we can make local politics national, we can level the playing field. We can make it so that you don’t need rich donors to run a campaign.”