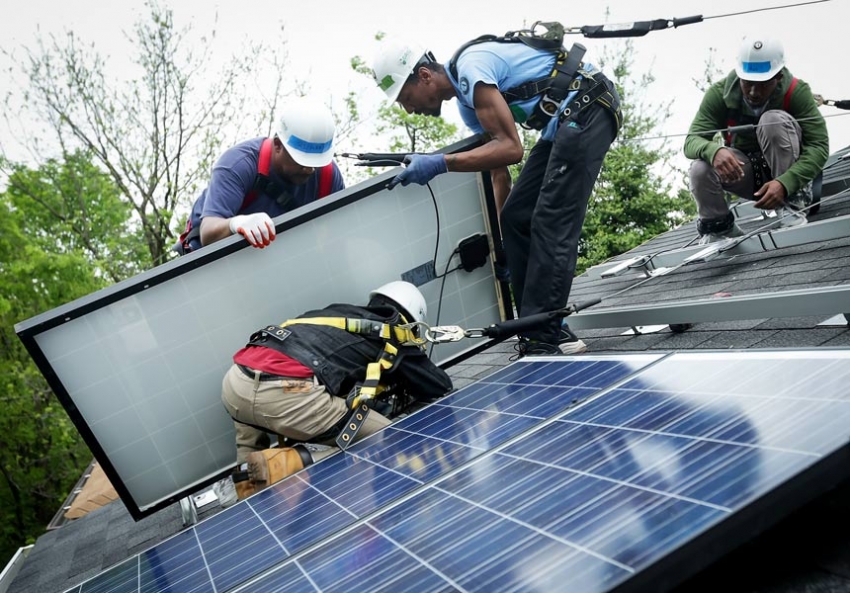 Workers put solar panels down during an installation May 3, in Washington, D.C. The installation marked the one millionth in the U.S. (Alex Wong/Getty Images)

Without strong unions, renewables companies may compete in a race to the bottom. Labor has already learned this lesson the hard way.

Jobs versus the environment—it’s an old dilemma that pits unions seeking work for their members against activists rallying against projects like the Keystone XL.

An expanding renewable energy sector might provide a way out of this quandary. Solar and wind energy projects can put people to work without imperiling the planet. But will these jobs be friendly to workers, as well as the environment?

The International Brotherhood of Electrical Workers (IBEW) and the United Steelworkers (USW) want to ensure that unions have a place in the emerging low-carbon economy. After decades of organizing workers in the fossil-fuel-intensive mining, refinery and utility sectors, they see the winds shifting. Refineries and coal plants are shutting down and taking jobs with them, thanks to a combination of market forces and new climate policies enacted after years of public pressure. Last year, the number of jobs in oil and gas fell by 18 percent, while those in renewables increased by 6 percent.

While this is good news for the environment, it could cut into unions’ membership. In response, they’re launching campaigns to organize workers in the clean energy sector. Data on existing union representation in renewables is sparse, coming almost entirely from industry sources and varying from state to state. Labor economist Carol Zabin says that in California’s booming solar market, utility-scale wind and solar projects that sell wholesale electricity are typically built with union labor and offer good wages and benefits. Rooftop solar-panel installation in the state, conversely, tends to be non-union, operating in the laissez-faire world of residential construction. Nationwide, average wages for utility-scale solar installers are 20 percent higher than those for installers working on residential projects, according to the 2014 National Solar Jobs Census.

Yet rooftop solar is one of the fastest- growing sources of renewable energy, representing an important opportunity for unions. Solar workers “face the exact same challenges all non-union workers face,” says Maria Somma, organizing director for the Steelworkers.

Among those are lower-than-average wages, little job security and no collective bargaining power to change either. Overall, wages in the solar sector are still far below those in the oil and gas industry, where years of union involvement has secured good wages and benefits for many groups of workers. According to the Bureau of Labor Statistics, the median hourly wage for a solar-panel-installer in 2015 was $18, compared to $32 for a refinery operator.

The Steelworkers are currently exploring ways to organize renewables workers around the country. Because the union has yet to take any of its campaigns public, Somma declined to give specifics.

But organizing efforts in the renewables industry face three major challenges: resistance from solar companies and other employers, a geographically diffuse work force, and jobs that are especially vulnerable to outsourcing and relocation.

“An employer is an employer, whether they’re an environmentally friendly employer or a polluter,” says Somma. She says the Steelworkers have already seen renewables companies roll out the kind of intimidation standard for the private sector in response to union organizing: captive audience meetings, threats of ring and contracts with a slew of anti-union consultants.

Employers can also leverage the threat of outsourcing. “Importing a massive, massive heavy wind turbine from China is still cheaper than producing it in the United States,” laments Somma. And bosses are none too shy about holding that fact over workers’ heads.

Union-busters often feed workers the same line. “They’ll say: ‘If a union were to come in here, we’re not sure we would be able to maintain our competitiveness in the industry,’” explains Jerry Kurimski, an international representative with the IBEW, which is also expanding organizing in the renewable energy sector. “They’re not going to say ‘we’re going to move the place’—that’s illegal—but they’re very careful in crafting a message that says it without saying it.”

Kurimski built wind farms as an IBEW laborer before moving to Washington to work with the union’s national staff. He notes that the nature of the work compounds the difficulty of organizing: “On wind, you have five to 10 workers on wind farms that span several hundred square miles.” This creates barriers to building the relationships and trust necessary to win tough fights with bosses.

But without strong unions, renewables companies may compete in a race to the bottom. Labor has already learned this lesson the hard way: In 2006, the Pennsylvania governor’s office wooed Spanish wind-turbine manufacturer Gamesa to the state. Attracted by state and federal tax credits, the company opened facilities that put 1,200 USW members to work statewide, with one factory opening on the site of a long-closed U.S. Steel mill. But when the tax credits expired after seven years, so did Gamesa’s interest in Pennsylvania—and the jobs they brought with them. Thanks to the ease of outsourcing, much of Gamesa’s manufacturing now takes place in China and Brazil, where labor costs are cheaper and standards more lax.

Organizers say that public subsidies for wind and solar development should be attached to basic labor requirements. Between 2008 and 2014, wind and solar projects received as much as $24 billion in tax credits and other subsidies.

“If they want … public money,” says Somma, “these employers should provide good-paying jobs and those employees need to be able to form a union.”

Despite the challenges, Kurimski and Somma are optimistic about moving toward an economy that is good for both workers and the environment. Many world leaders have at last begun to take climate change seriously. At last year’s Paris climate conference, 43 of the most vulnerable countries signed a declaration highlighting the necessity of a 100 percent transition to renewable energy by 2050.

The stakes are high, but organizers hope to ensure that in the frenzy of this transition, the renewable energy sector doesn’t treat workers like they’re disposable.