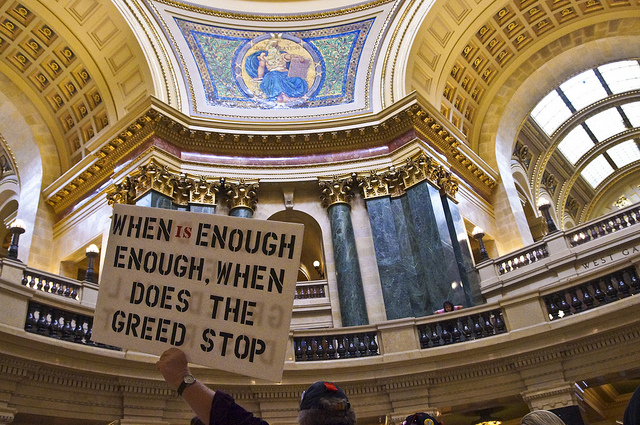 We rarely see how dark money shapes our politics, since it works behind the scenes and out of sight. But an extraordinary spectacle that has played out in Wisconsin over the past few years offers a disturbing glimpse. (Joe Brusky/ Flickr)

The pernicious effects are taking deep root and fostering cultures of corruption at all levels of government.

"The Wisconsin scandal might signal a coming deluge of corruption in state and local politics—or a moment when the tide began turning against it.

In May, National Review reported that Charles and David Koch, the billionaires famous for funding right-wing politicians and causes, were rethinking their spending. Disappointed with the payoffs, irked by Donald Trump and concerned about the public-relations hits they’d taken, the brothers decided to reduce their spending on federal elections.

One upshot has been more Koch money going to state political campaigns, which get little national media scrutiny but have outsized impact. “For a relative pittance—less than $100,000—corporations and others can use dark money to shape the outcome of a low-level race in which they have a direct stake,” as the authors of a recent essay in The New York Times wrote. “Dark money” refers to contributions to nonprofit “social welfare” advocacy groups rather than political campaigns. State laws vary, but in Wisconsin, such contributions can remain anonymous.

The authors of the essay, Chisun Lee and Lawrence Norden of the Brennan Center for Justice, note that the level of dark money in politics has spiked over the past decade. A Brennan Center project that tracked political spending in six states found that, “on average, 38 times more dark money was spent in these states in 2014 than in 2006.”

We rarely see how dark money shapes our politics, since it works behind the scenes and out of sight. But an extraordinary spectacle that has played out in Wisconsin over the past few years offers a disturbing glimpse.

Scott Walker, the state’s governor, has pursued an aggressively right-wing agenda that has been funded, in large part, by dark money. We know this by way of an investigation into Walker’s fundraising—a “John Doe” probe, meaning that it was conducted outside of the public spotlight, with the court records remaining sealed, which Wisconsin law provides for in some circumstances.

In 2015, the Wisconsin Supreme Court halted the investigation. Prosecutors had been piecing together a case against Walker, arguing that his ties to conservative political groups broke campaign-finance laws. The court, with a right-wing majority, voted 4-2 to shut it down because, it said, Walker’s coordination with the groups was “issues advocacy” rather than political campaigning. The former is permitted under the U.S. Supreme Court’s Citizens United v. FEC ruling. The latter isn’t.

In mid-September, The Guardian published leaked files from the halted investigation, which revealed that “issues advocacy” in Wisconsin is just another name for political campaigning. As The Guardian noted, “the files open a window on a world that is very rarely glimpsed by the public, in which millions of dollars are secretly donated by major corporations and super-wealthy individuals to third-party groups in an attempt to sway elections.”

This week, the U.S. Supreme Court declined to hear an appeal of the Wisconsin Supreme Court’s 2015 ruling that shut down the Walker investigation. That closed the courtroom phase of the scandal. Now it moves to the court of public opinion, where Walker will likely fare less well. As the Brennan Center authors note in their New York Times piece: Polling last year “showed three-quarters of self-identified Republicans and an equal percentage of Democrats supported more disclosure by outside spenders.”

Given the recent, big-donor shift toward state-level politics—and Wisconsin’s centrality to broader political contests over unions, higher education and much more—it’s worth diving into the Walker scandal, which has been big news in Wisconsin but has gotten too little national attention.

Laments about Citizens United often focus on its influence on presidential and Congressional races. But Wisconsin is a cautionary tale: The pernicious effects are taking deep root and fostering cultures of corruption at all levels of government.

The players and payoffs

After pushing through a law that weakened public-sector unions in 2011, Walker needed allies on the state’s Supreme Court. Its justices are chosen through elections.

The Wisconsin Club for Growth (WCFG) is a tax-exempt “social welfare” organization, and it was the primary tool that Walker used to make sure he had allies in the state legislature and on the Supreme Court.

Walker raised money from wealthy donors, but rather than writing checks to Walker’s campaign, which were subject to spending limits, the donors often gave to the WCFG, which then created ads that supported the campaigns of Walker’s political allies. It also channeled money to other nonprofits that did the same.

In 2011, the Wisconsin Supreme Court election became a proxy battle over Walker, with David Prosser, a right-wing judge, facing JoAnne Kloppenburg, a candidate friendly to unions.

Wisconsin Club for Growth spent more than $400,000 supporting Prosser, who eventually won the race by a few thousand votes. In an email to GOP operative Karl Rove, Walker explained that the group’s help had been critical to pushing through his agenda in Wisconsin. Specifically, it was “key to retaining Justice Prosser.”

WCFG spent about $9 million the following year, during Walker’s recall race, on political activity. A Walker aide coordinated the work of the Walker team with the WCFG and other right-wing groups in the Prosser and Walker recall races, and in several other races for the state legislature in 2012.

As the Center for Media and Democracy (CMD) noted, “Governor Walker and his campaign staff coordinated on more than $30 million in express advocacy expenditures—from soliciting huge corporate and personal checks down to where and when political ads would be placed.”

For all its twists and turns, the money trail in this scandal is easy to follow. Walker raised funds from wealthy donors, who gave anonymously to an “advocacy group” that is a well-known Walker ally, which spent the money on ads to help elect politicians and justices who helped Walker push through conservative policies, which in turn benefited those donors.

One concrete example: The documents leaked to The Guardian showed that the owner of a lead manufacturing company gave a total of $750,000 to WCFG between April 2011 and January 2012. Around the same time, the GOP-controlled state legislature passed laws that shielded lead manufacturers, retroactively, from liability for their product.

There's nothing subtle about the quid pro quo, in other words. It's a straightforward case of buying power, “justice” and politicians.

And it's all legal, according to the Wisconsin Supreme Court.

In 2010, when U.S. Supreme Court Justice Anthony Kennedy wrote the majority’s opinion in the Citizens United case, he argued that the transparency made possible by digital culture cancels out the threat posed by cash flooding into the political system. If the people know which corporations and people give money, after all, they will judge the arguments accordingly.

Kennedy’s rationale, utopian at best, dissolves in the heat of actual political battle. The Wisconsin case points toward a reality in which there is no barrier between advocacy groups and political campaigns—that is, between anonymous donors and elected leaders.

The stakes are high. The essential question is: How much power and influence will dark money buy? The Wisconsin scandal might signal a coming deluge of corruption in state and local politics—or a moment when the tide began turning against it. Either outcome seems possible. Only one is compatible with democracy.